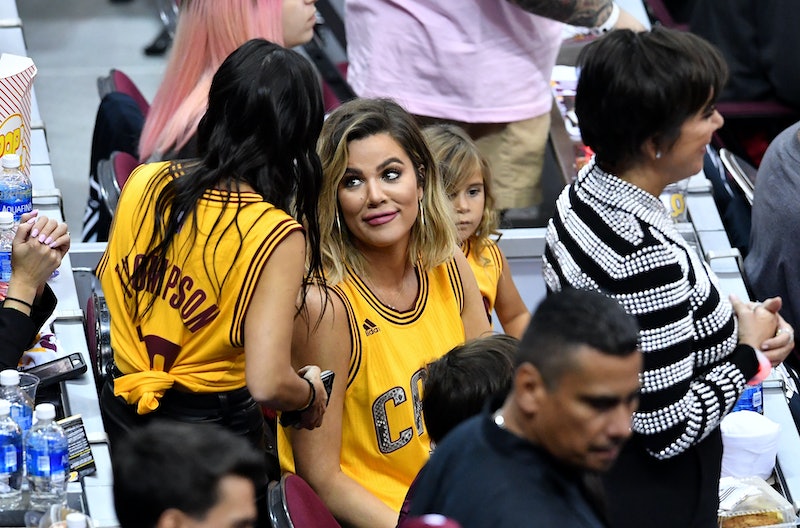 It's not as if she had to go to the game, especially since she's busy as a reality TV star, entrepreneur, and new mom. Needless to say, it's sending a very clear message that Thompson has her support. And the timing is especially interesting, given recent reports that their relationship might've been in trouble, spurred by Khloé's social media activity. Khloé posted about being "broken" a month ago on her Instagram Story, according to Elite Daily. Plus, last week, the publication reported the KUWTK star posted about negative relationships on her Instagram Story.

These two have really been through the ringer throughout their relationship, even before dealing with very public cheating allegations. The wives and girlfriends of athletes tend to get a bad wrap, especially when they're famous, and even more so when they're Kardashians. So of course, Khloé caught some flack from diehard Cavaliers fans from the start of their relationship.

Nevertheless, the Cavaliers actually secured their first win of the season after losing the first six games when Khloé was in the stands this week. So, what Kardashian curse? If anything, this supports the theory that Khloé is good luck. So, does this mean that Khloé will be at more games?

Sure, there might be some Cavaliers fans that want Khloé at the games if that means the team can turn this season around, but the non-Cavaliers fans are just curious about what Khloé's presence means for their relationship.

Everyone and their grandmothers are well-aware of the very public cheating allegations that came to light in April, just days before Khloé and Thompson welcome their daughter True Thompson into the world. (Bustle previously reached out to the couple's reps for comment on the cheating rumors, but did not hear back.) Every quote posted on Instagram and every paparazzi photo has been heavily scrutinized ever since.

Ultimately, Khloé decided to stay with Thompson and make things work. The family was in California for the summer, which is his off-season. The initial plan was for Khloé and baby True to relocate to Cleveland at the start of the season, according to People. In September, a source claimed to the publication, "He has games in October. They are all moving back to Cleveland, and it’s hard for Khloé. She will really miss Kris [Jenner] and her sisters."

That same source emphasized that the new mom "is committed to keeping her family together. And Tristan has shown that he is committed to Khloé, so Khloé will make it work."

However, just a month later, another People article reported that Khloé and True's move to Cleveland has halted. For now, it seems like it is just on pause and not actually canceled, since a source told People,

"Khloé still struggles with this sometimes. She wants to move back to Cleveland, but she isn’t sure what date she is [going]. The move is postponed for now. She seems very upset about leaving her family. She had the best summer in L.A."

Khloé's mom Kris Jenner appeared on the Oct. 26 episode of The Ellen DeGeneres Show where she played a game called "Burning Questions." Ellen DeGeneres straight up asked "Is Khloé moving to Cleveland?" and all Kris said was "maybe."

It seems like "maybe" is the only answer Khloé's fans will get for now. That's essentially a non-answer, but it's pretty much the only response to any questions regarding their relationship: Will Khloé and Thompson stay together? Maybe. Will Khloé and True move to Cleveland? Maybe. Is Khloé a good luck charm for the Cleveland Cavaliers? Maybe.

More like this
What To Know About Simon Guobadia’s 3 Ex-Wives & Children
By Brad Witter
We’ve Got A Text! Another 'Love Island' Series Is On The Way
By Darshita Goyal
Meet Jungle Runner-Up Owen Warner's Equally Handsome Brothers
By Sam Ramsden
Twitter Is Saying The Same Thing About Jill Scott Winning 'I’m A Celeb'
By Sophie McEvoy
Get Even More From Bustle — Sign Up For The Newsletter