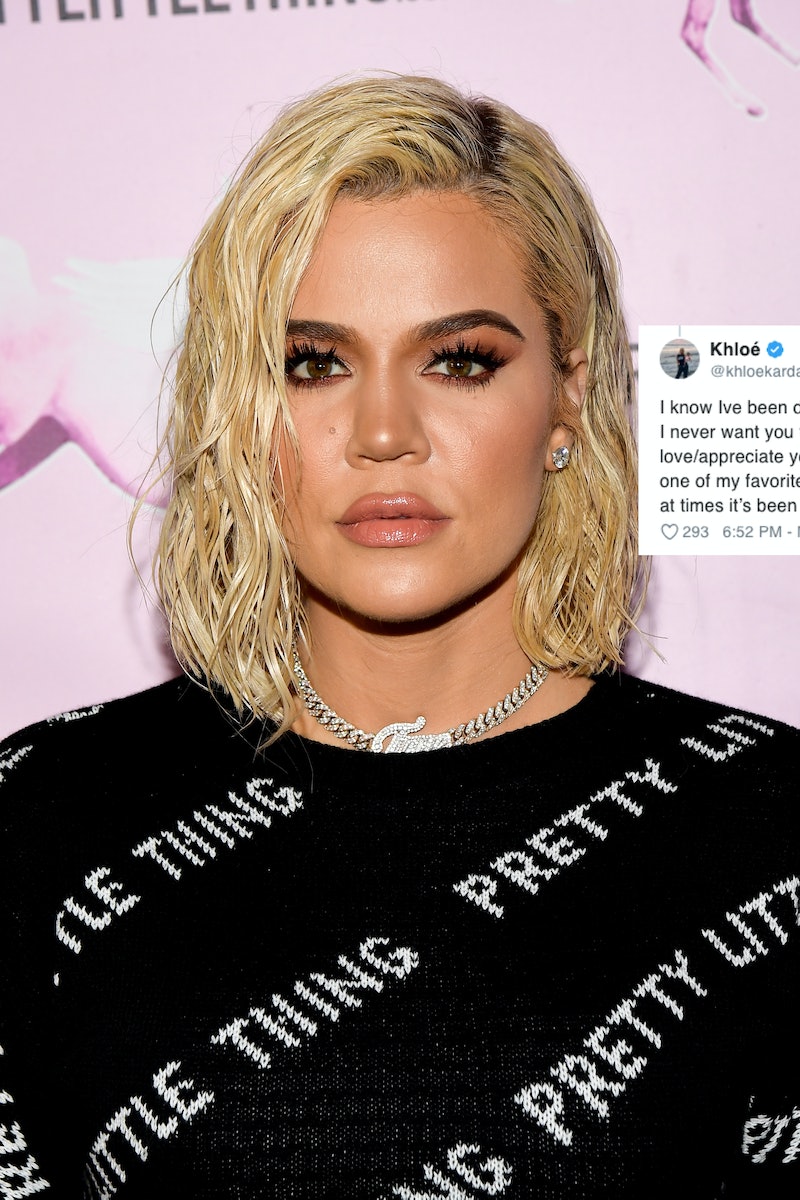 Even though Khloé Kardashian is a public figure, no one can blame her for taking a step back from the spotlight. OK, well, she's pretty much always in the spotlight, but she's just not as active on social media lately. That's understandable after her very public recent split from Tristan Thompson. In a March 26 tweet, Khloé Kardashian opened up about her "rough month," while also emphasizing that she will always be there for her fans no matter what — even if sometimes Twitter feels "toxic."

It all started when a fan told the reality TV star, "don’t let those b*stards get away with your interaction with your fans." Kardashian admitted in her reply:

"I know Ive been distant. A rough month for me emotionally. But I never want you to think for second that I don’t love/appreciate you. All of you! I try to come on when I can cuz one of my favorite things to do is have sweet tweet chats. But at times it’s been toxic 4me. Balance."

Fair enough, it really has a been a tumultuous time for the Keeping Up With the Kardashians star. On Feb. 19, rumors swirled that Thompson cheated on her with Jordyn Woods, a Kardashian-Jenner family friend. During a March 1 interview on Red Table Talk, Woods insisted that the only thing that happened was a kiss when she left Thompson's home and denied being "intimate" with him. (Bustle previously reached out to reps for Kardashian, Woods, and Thompson, but did not hear back.)

In response to that interview, Kardashian accused Woods of breaking up her family in a March 1 tweet.

Kardashian received some backlash for that post. Eventually, she placed additional blame on Thompson in a follow-up tweet, writing, "Tristan is equally to blame but Tristan is the father of my child. Regardless of what he does to me I won’t do that to my daughter. He has been addressing this situation PRIVATELY. If Tristan were to lie publicly about what conspired,then [sic] yes I would address him publicly as well."

Overall, March was just a rough month for the reality TV veteran online. She faced even more social media backlash on March 16 when she said it was "cute" that a fan worked 20 hours to buy a pair of jeans from her Good American line.

One Twitter user admitted that Kardashian's reply upset her. Another said the situation was "not cute," implying that the reality star was out of touch.

However, after being mocked for perceived insensitivity, it turned out that Kardashian actually ended up sending the fan some clothes. The fan posted photos of her new Good American stuff and wrote, "I never once took her tweet to be anything other than positive."

Another fan tweeted about Kardashian's gift and asked people to "spread positivity." Kardashian appreciated the sentiment and responded, "negative things spread like wild fire." She also clarified that she was sending her fan Good American clothes all along, but didn't mention it in her initial reply because she wanted to surprise her.

It really has been a tough month for Kardashian, both on and off social media, but her loyal supporters have her back. On March 26, one person tweeted to Kardashian,

"we f*cking love you! We may joke from time to time 'Where the hell is Khloé??? She doesn’t love us anymore' but we know how it has been for you! Don’t worry about us, we understand. Focus about your health and beautiful baby! That’s more important than us."

In response, Kardashian promised, "Trust me, I’ll be back in full beast mode soon." Then she explained her plan for the recent future: "Just trying to disconnect and be with my baby and work on myself more." Ultimately, she promised, "But I’ll never leave you."

While Kardashian has a lot of very vocal supporters, no one would blame her for taking a break to avoid the negativity. Plus, this is Khloé Kardashian: She always emerges stronger after tough times.

More like this
Kourtney Kardashian Claps Back At Pregnancy Speculation On Instagram
By Jake Viswanath
Everything To Remember About Lace Morris Before 'Bachelor In Paradise' Season 8
By Grace Wehniainen
Bachelorette Gabby Kissed Her New Fiancé On 'Dancing With The Stars'
By Jake Viswanath
Where Is Former Bachelor Host Chris Harrison Now & What Is His Net Worth?
By Hugh McIntyre
Get Even More From Bustle — Sign Up For The Newsletter