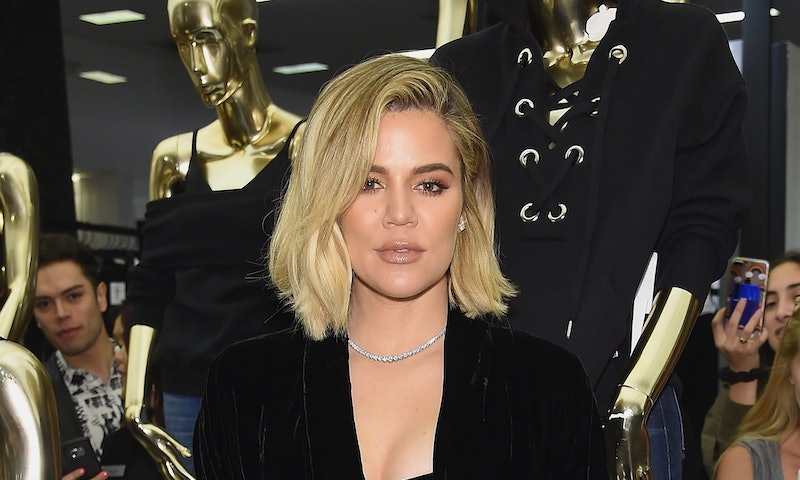 True Thompson may be only six months old, but she already knows how to throw a party. Khloé Kardashian celebrated her daughter's first half-birthday on Friday, October 12 with a "cousin cupcake party" that brought together the youngest generation of the Kardashian-Jenner family for some sweet treats.

And the only thing sweeter than the trays of cupcakes are the photos that the Good American founder shared on Instagram of the adorable family celebration.

For her big day, True was joined by Kylie Jenner's 8-month-old daughter Stormi, Rob Kardashian's 1-year-old, Dream, and Kim Kardashian's youngest two children, 2-year-old Saint and his baby sister, Chicago, 9 months. The cute cousins kicked back on a big pink blanket in Khloé's backyard, where they indulged in an assortment of pink-frosted cupcakes, and a layer cake that Chicago seemed particularly interested in. (After all, Kim's kids have always been tiny icons.)

"Cousin Cupcake Party!!! 💕" Khloé captioned the sweet snap of True's birthday party, before joking about a possible kid-starring spinoff of their famous show, by writing "Keeping Up With The Kousins 💕." She also shared a photo of herself sitting with the little ones on her Instagram story, where she described the party as the "best day ever."

The new mother gushed about how happy she's been since welcoming baby True earlier this week, writing that her daughter made all of her dreams come true when she arrived into the world. "I probably dreamt about you my entire adult life," Khloé wrote alongside an adorable photo of a smiling True. "You have exceeded every expectation I had of you! This is LOVE 💕."

Though Khloé has been dealing with rumors of boyfriend Tristan Thompson's alleged infidelity since baby True was born in April, it seems that the reality star has been primarily taking comfort in motherhood, and gushing over how much love she feels for her baby girl as she watches her grow.

Another "dream" that Khloé has seen realized since the birth of her daughter is seeing True develop the same close relationship to her cousins that the Good American founder got to enjoy with her own family growing up. Back in August, Khloé shared a series of snapshots of True posing for her cousin Penelope while Kourtney's daughter practiced her photography skills (along with a sampling of some of Penelope's polaroids), describing is as one of the "moments I've been waiting for!!!"

"How blessed am I?!?!" Khloé wrote alongside the sweet snaps.

And it seems as if the other Kardashian-Jenner sisters are equally as excited to have baby True become "best friends for life" with her cousins. After Kim's daughter Chicago, who was born in later January, was joined soon after by Kylie's daughter Stormi, the sisters revealed that they couldn't wait for Khloé's little girl to join in on their "sleepovers" and play dates.

In May, Kylie revealed in an interview with the Evening Standard that the "Kardashian baby boom" had brought the adult sisters closer together, with Kim saying, "I think recently you have become closer to all the sisters, especially me and Khloé, because we were all expecting at the same time." Kylie confirmed that their daughters had also benefitted from that new closeness, adding that the trio "hang out all the time."

Based on the sweet snapshots from True's half-birthday party, it looks like that bond is one that all of the youngest Kardashian-Jenner babies share. (After all, isn't the best part of being born into a large family knowing that you have a built-in support system?) Between all of the delicious, sugary treats and the sweet relationships that she has with her cousins, it's clear that life for True is just going to get sweeter.