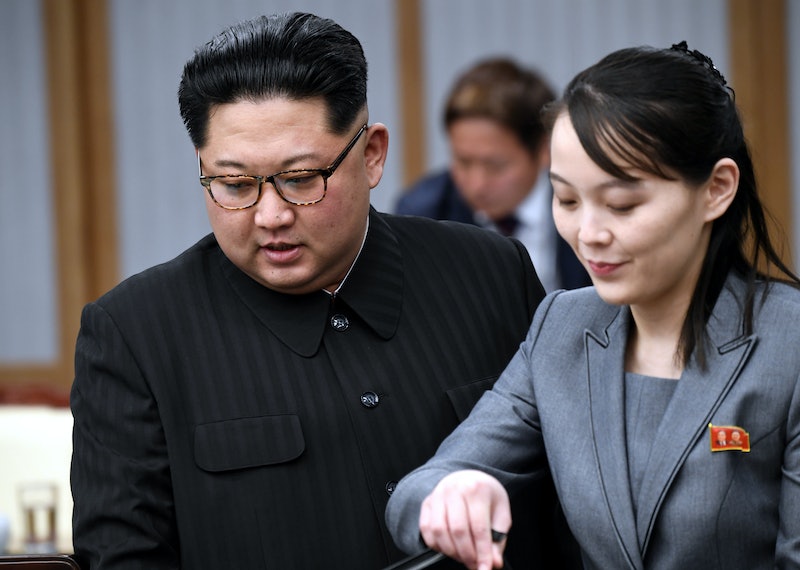 Both President Donald Trump and North Korean dictator Kim Jong Un are in Vietnam for their second in-person meeting — but neither of them came alone. Any leader coming to a meeting like this arrives with an entourage, but the question of who accompanies them looms even larger when the meeting involves a secretive nation like North Korea. So if you're wondering whether Kim Yo Jong, Kim Jong Un's younger sister, is in Hanoi with him, then you're not alone.

When the North Korean leader got off his personal train at the Dong Dang station at the Vietnamese border with China, The Washington Post reported that Kim Yo Jong was there as well. The Japanese network TBS-JNN also caught footage of Jong Un smoking at a train station in China in the dark, and Yo Jong was there holding an ashtray for her brother. While other North Korean officials were already waiting in Vietnam when he arrived after his long train ride across China, it appears as though his sister took the train trip with him.

While it's notoriously difficult to learn anything about the inner workings of the so-called Hermit Kingdom, it has become clear that Yo Jong is far from just someone who holds Jong Un's ashtrays.

She attended the 2018 Winter Olympics in South Korea, as The Guardian wrote at the time, which put her right alongside Vice President Mike Pence and first daughter Ivanka Trump. According to The Washington Post, her trip to PyeongChang made her the first member of the North Korean ruling dynasty to cross over into South Korea. Like the other members of her family, though, information on her is difficult to come by.

Yo Jong is about 30, give or take a year, according to the U.S. Treasury Department. This information only became public knowledge when the Treasury put her on a sanctions list in January of 2017. At that time, the Treasury listed her as the vice director of the Workers' Party of Korea Propaganda and Agitation Department, which is a fairly high rank considering that the Workers' Party of Korea is essentially the country's governing body.

As the name of her department within the party indicates, Yo Jong has an important role to play in the realm of propaganda. According to The Washington Post, she often attends public functions alongside her brother in an effort to help things run smoothly.

She's not the only woman who has traveled with Jong Un, although she could be the most powerful. There were four women in Kim Jong Un's entourage for his 2018 summit with Trump in Singapore. They included Yo Jong, diplomat Choe Son Hui, pop star and politician Hyon Song Wol, and government official Kim Sung Hae. Although Bustle noted at the time that this made the leader's group look more gender equal gender than Trump's, it's important to note that life for most women is not easy in North Korea.

“Women are still discriminated against in North Korea, despite North Korea’s claims to the contrary,” said Amanda Mortwedt Oh, project manager for the Committee for Human Rights in North Korea, in an email to Bustle in 2018. “We can look to the numbers of North Korean escapees, approximately 80% of whom are women, as an indicator that women are the ones having to flee the regime."