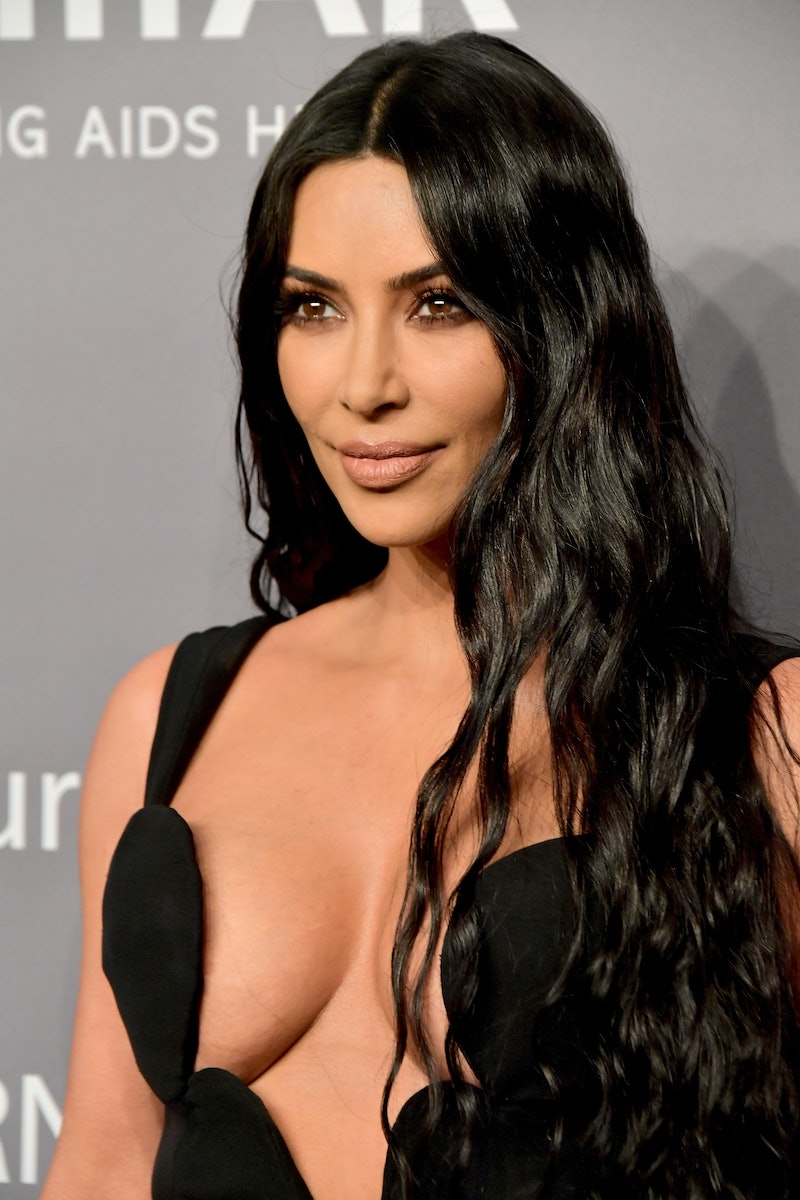 Kim Kardashian is in Paris for Paris Fashion Week, and it looks like one print in particular has taken over her suitcase. Kardashian keeps wearing leopard print catsuits, stepping out in the printed spots back to back. The beauty mogul was in town for the last day of Fashion Week, and Kardashian was clearly feeling the street style spirit.

Her first leopard print catsuit made its debut on March 5, where Kardashian wore the French designer Azzedine Alaia's leopard print jumpsuit and coat. Her walk on the wild side was accented with matching leopard print gloves and shoes, covering herself head to toe in the animal print. Knowing Kardashian's penchant for vintage designer pieces, her outfit came from the late designer's fall 1991 read-to-wear collection. That year, Alaia's entire collection featured head-to-toe leopard designs, sending models down the runway in slinky and body hugging silhouettes.

Before leaving the Ritz Hotel for her fashion events, Kardashian took to Twitter to share her outfit. Sensing the oncoming onslaught of comments against the pattern-heavy look, Kardashian referenced 1995's Clueless in her caption.

“You don’t understand… this is an Alaia,” Kardashian wrote, which referenced the movie's scene where Cher Horowitz got mugged while standing in a parking lot. Horowitz was in the middle of calling a cab on her cell phone when a robber came up to her, took her purse at gunpoint, and told her to get down on the ground. Not wanting to get her designer clothes dirty, Horowitz famously said, "You don't understand...this is an Alaia."

Fans might remember that in 2016 Kardashian also got robbed at gunpoint in Paris, so the quote potentially has more than one meaning.

Fast-forward one day later, and on March 6 Kardashian stepped out in her second back-to-back leopard jumpsuit. But instead of being completely covered in material, Kardashian went sheer. The black jumpsuit also came from Alaia's collection.

Kardashian posted photos of the outfit on her Instagram, along with the caption "An a whatta???" This quote referenced the same Clueless scene as her previous post. The robber went, "An a-whatta?" when Herowitz mentioned Alaia.

Kardashian's second jumpsuit was a turtleneck catsuit with velvet coverings that took the shape of underwear and bra cutlets. She paired the look with PVC stilettos that were in the shape of closed-toe pointy heels. She also topped off the look with a beret, because France.

As W Magazine noted, these looks are in step with Kardashian's current obsession with '90s designers. In 2019, she has exclusively stepped out in '90s vintage, building her collectible designer vault.

As Vogue reported, in the last couple of months the reality TV star was spotted in a Tom Ford-era Gucci swimsuit thong from Spring 1997 that was peeking out from underneath her sweatpants, and a sheer purple-swirl Jean Paul Gaultier crop top part of the designer's Spring 1994 collection. Most notably, Kardashian also wore two vintage Thierry Mugler pieces for the “Thierry Mugler: Couturissime” exhibition at the Montreal Museum of Fine Arts. One dress was from the Fall 1999 Couture collection and the other was from Spring 1994.

Now Kardashian can add vintage Alaia to her collection. One can only wonder what rare finds she will debut next.