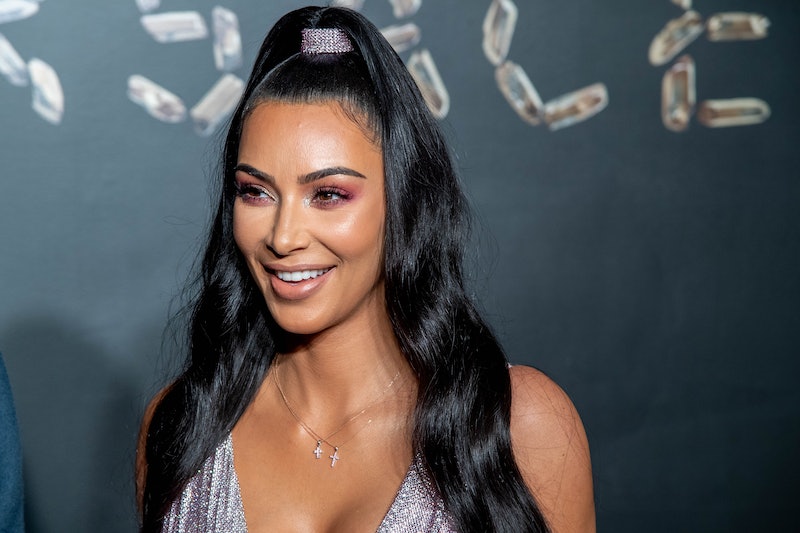 Get ready for the most adorable double take you'll do this weekend. On Friday, July 26, Kim Kardashian shared photos with her "twin" Chicago on Instagram, featuring the mother and daughter pair wearing matching white dresses as they sit on the couch together.

In the series of sweet snaps, Kim — wearing a form fitting, off-the-shoulder white maxi dress — sits with her younger daughter and chats while she ties Chicago's shoes. While the KKW Beauty founder didn't give any details about what the pair were getting ready for, the one-year-old matches her mother in a sweet white dress, with a cold shoulder detail for the ultimate "Mommy & me" moment. "My twin," Kim captioned the photos, along with a starburst emoji.

Kim's recent Instagram post is far from the first time that she has pointed out the strong resemblance between herself and Chicago. In January, shortly after Chicago's first birthday, she posted a photo of herself as a child on Twitter, and fans were shocked by how much the youngest West daughter looked like her mother. "BB Kiki," Kim wrote, to which @KKWCENTRAL responded with a picture of Chicago, writing, "Omg baby Chi looks like you."

A few months later, in March, the reality star shared some childhood photos on her Instagram Story, including one where she is getting a bath from her grandmother. "Me and MJ," Kim wrote alongside the photo, before pointing out, "Chi and I look like twins here."

Kim and Kanye West welcomed Chicago via surrogate in January 2018, and while she has since praised surrogacy for allowing her to continue to expand her family — the couple also welcomed son Psalm in May via surrogate — Kim did explain in October 2018 that her resemblance to Chicago helped soothe her nerves about the process of surrogacy. "I think I was so nervous to have a surrogate and to have that connection that God was like, 'I’m going to make her look just like you,'" Kim said on Ashley Graham's podcast, Pretty Big Deal, describing her younger daughter as "my twin mixed with Saint."

According to Kim, Chicago bears a strong resemblance to both of her brothers; when Psalm was born in May, the reality star gushed on Twitter that "He’s also Chicago’s twin lol I’m sure he will change a lot but now he looks just like her." A month later, she shared a photo of Pslam on Instagram that proves that the West family resemblance truly is strong.

While Psalm might look the most like Chicago, the one-year-old is especially close to her older brother, Saint. A few months after Chi's birth, Kim posted a photo of Saint kissing his little sister on the nose, along with the caption, "He loves her so much." A few months later, she shared another snap of the pair wearing matching Yeezy-inspired sweatsuits and matching expressions on Instagram, writing that "These two are inseparable," along with the hashtags, "#Chi" and "#Saint."

Clearly, the connection between the West siblings is very strong — and so is the resemblance. But nothing can ever beat the bond between mother and daughter, as Kim's adorable "twinning" photos prove, especially when that daughter is the spitting image of a famous reality star.