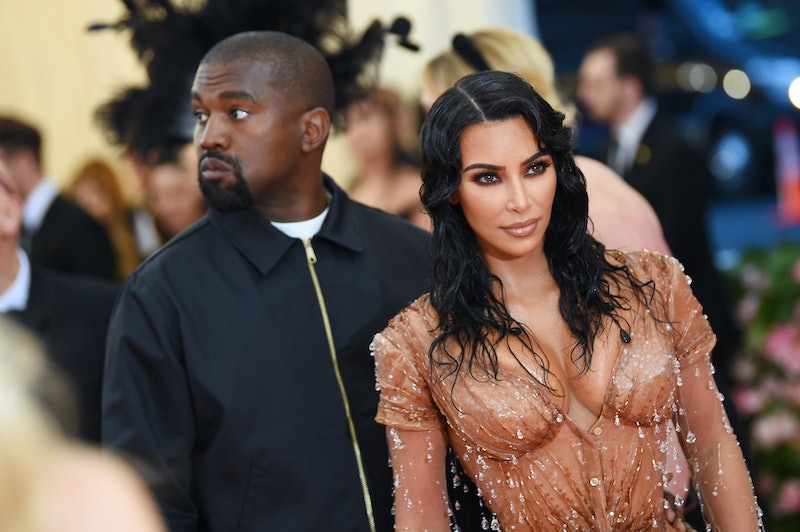 When the Kardashian-West family needs a change of pace, they have just the place: their new ranch. Kim Kardashian's family photo from Wyoming is a major contrast from just about any photo they have taken in Los Angeles. In the picture, Kim, Kanye West, North West, Saint West, and Chicago West are all gathered around an outdoor dinner table. There is a fire roaring in a nearby pit, and the sky is a stunning shade of KKW Beauty blush pink. The objectively beautiful setting feels like a world away from their glamorous life in Calabasas that is full of marble sinks, beauty launch events, extravagant birthday parties, and paparazzi.

The Kardashian-Wests have been talking about the ranch life for a while, and they've made it a reality. As Kim said when Kanye interviewed her for the September issue of Vogue Arabia, she sees their family "living on a ranch in Wyoming, occasionally going to Palm Springs and our home in Los Angeles" in 10 years. She also said she plans on becoming a lawyer by then, and establishing her practice "from [Wyoming] and fly into DC, NY, and LA." Shortly after the Vogue Arabia interview was published, TMZ reported Kanye purchased a $14 million piece of property outside of Cody, Wyo. called Monster Lake Ranch.

When the Keeping Up with the Kardashians star appeared on The Tonight Show Starring Jimmy Fallon on Sept. 12, she confirmed Kanye “did just buy a ranch there” and wants “to move there” eventually. Kim said she would prefer to stay in Los Angeles and use the Wyoming property as a vacation home for the time being.

“It’s the prettiest place you’ve ever seen in your entire life," she continued. "And even my sisters, everyone, we’ve had this dream of getting a ranch and spending our summers there and getting away. But he took me to go see it for the first time maybe a week ago before he bought it, wanted my opinion.”

Kim told host Jimmy Fallon that she went up to the cabin with Kanye and three of their kids, only to find out there was “no electricity,” “no bathroom,” “no [cell phone or internet] service,” and “a fire thing” they could use for cooking. The next day, she discovered there was a hotel nearby with all of the amenities she missed while she was in the cabin, but Kanye thought the bare-bones cabin would’ve made for “a romantic little night.” Suffice to say, Kim was not feeling his vision.

The family's new spot came up again when Fallon and Kim played a game called "Show Me Your Phone." When Kim pulled up some texts Kanye sent about the ranch, she said, "He's so excited to maybe be moving to Wyoming— I don't know, not full time."

One day, she might bid her palatial house with those custom sinks adieu and call a cabin with no bathroom her full-time house. But for now, it sounds like Kim is content with calling their Hidden Hills pad her home base for a little longer.

More like this
Kim Kardashian Gives “Bucket List Dream” Lecture At Harvard
By Alyssa Lapid
North West Will Make Her Acting Debut Alongside Mom Kim Kardashian
By Radhika Menon
Everything You Need To Know About Kanye's Post-Kardashian Dating Life
By Bustle Editors
Did Pete Davidson Remove His Kim Kardashian Tattoos? Photos Point To Yes
By Alyssa Lapid
Get Even More From Bustle — Sign Up For The Newsletter
From hair trends to relationship advice, our daily newsletter has everything you need to sound like a person who’s on TikTok, even if you aren’t.