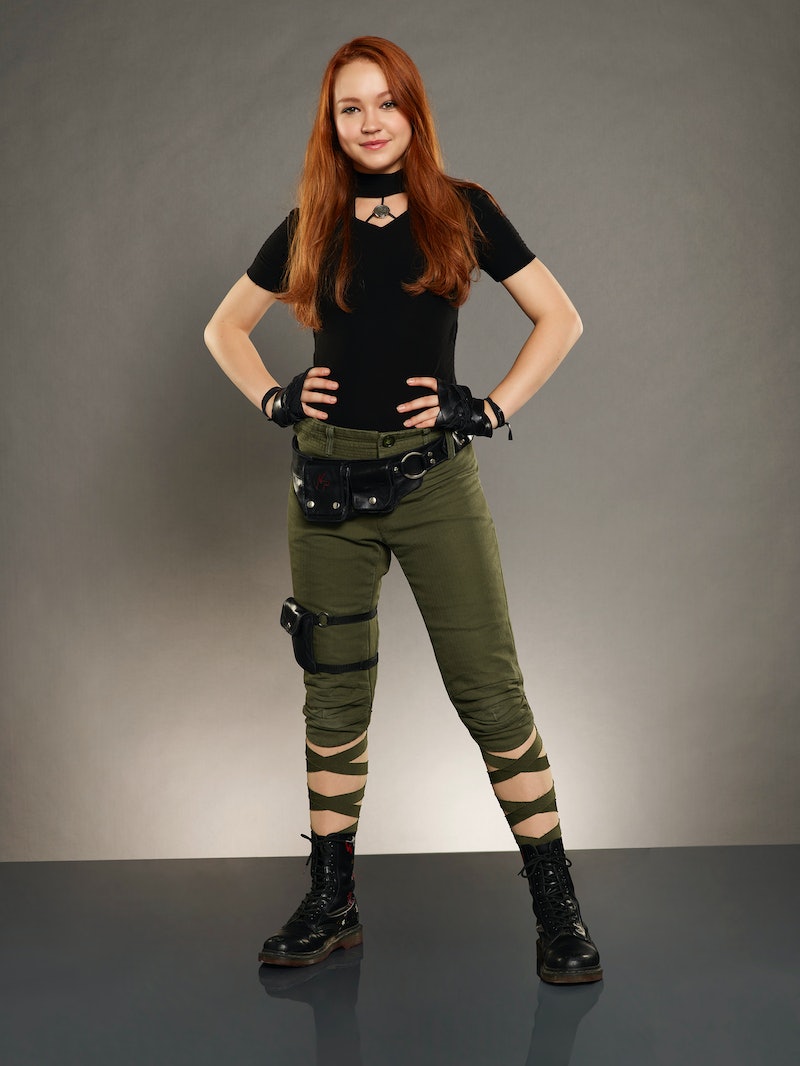 She's a teenager who moonlights as a spy, and was a hero to early '00s kids everywhere, but can Kim Possible also be Wonder Woman for a new generation? Executive producer of the upcoming live-action Kim Possible movie Zanne Devine thinks so. In a new interview with Variety, she shared her hopes for the impact that the new Kim could have on the tweens of today, including giving them a Princess Diana-style hero who also has to deal with high school drama, crushes, and friendship trials.

When it came time to pitch a Kim Possible reboot to Disney, Devine drew on the then recently released Wonder Woman movie for inspiration. "When I first joined the project, it was right around the time Wonder Woman had been released," the executive producer told Variety. "Given this moment in time, my pitch was this is Wonder Woman for the prepubescent set."

Given Kim's relatable world-saving ways, that's not a bad comparison to make. In the new movie, premiering Feb. 15 on the Disney Channel, Sadie Stanley's Kim is starting high school with her best friend Ron Stoppable, and preparing to fight dangerous supervillains, while also navigating the trials of a new school year. Like Diana, she has a lot to deal with at once, but she tackles every challenge with a positive spirit and kick butt attitude.

For Devine, imbuing the updated Kim with a strong sense of confidence was all about empowering the young viewers who will be tuning in to watch the movie. She explained to the publication, "I loved the idea of bringing forth a young female character that is completely comfortable in her body and able to take on the world while at the same time expressing genuine vulnerabilities about how to find yourself and trying to find your internal light as you ground yourself in the world. With all these things coming together, I had to be a part of it."

Making Kim a spy that kids can relate to extended to including lots of women behind the scenes too. From production designer Rachel Myers to costume designer Kathleen Detoro — who gave the character's costume a more functional overhaul — and stunt coordinator Melissa R. Stubbs, women were instrumental in building the new Kim's world in an authentic way. Much like Diana, the iconic character's latest iteration only exists because of a team of talented women working overtime to bring her story to life.

"I really try to have a broad spectrum of representation, and we had amazing men too," Myers told Variety. "But in this moment in time, when we have to really foster women's voices, women have to give other women chances to change the spectrum."

With any luck Kim's journey will resonate with a new generation of viewers, and give them another female hero to look up to. Sure, Wonder Woman is an Amazonian princess, and Kim is a modern day teen trained to be a spy, but at their core, both characters are all about honoring the power every woman has inside of herself. And that's a lesson kids need to learn as soon as possible.