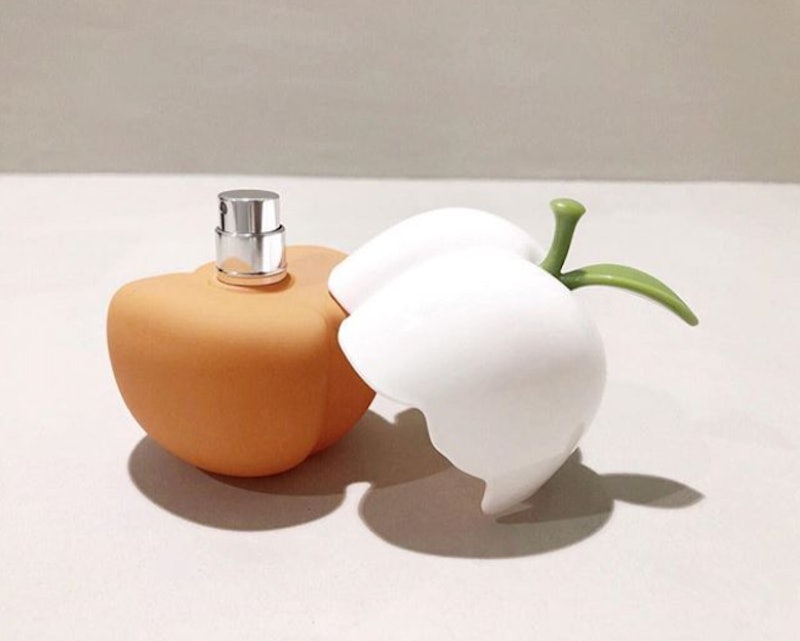 When it comes to the Kardashian Jenner business endeavors, nothing is done without serious thought. From Kylie Jenner parlaying her iconic lips into lip kits to Kim Kardashian harnessing the power of her contour, the women know how to do business. Now, KKW Fragrance restocked the Kimoji Peach fragrance, and I see what you did there, Kim.

In case you don't remember, KKW Fragrance launched a series of Kimoji inspired fragrances last year. They included a cherry, a peach, and a vibes quote bubble. Each of the scents were sweetly scented, and just in time for Valentine's Day, one of them is coming back in stock.

According to a KKW Fragrance Instagram story and tweet from Kardashian herself, the brand will be restocking their peach scent, and noted that they were doing so just in time for Valentine's Day. Now, if you're a common user of emojis, you know the significance of the peach emoji. If you don't, well, just Google it to find out its meaning. The fact that Kardashian and her fragrance brand is restocking the Peach Kimoji fragrance right before a holiday all about romance seems like it could be a little bit more than coincidence, and honestly, it's also funny AF.

Of course, Kardashian isn't the only person to think of putting a bit of double entendre into her Valentine's Day launch. In case you missed it, Lush Cosmetics made a major stir online a few weeks ago when they announced the launch of their Valentine's Day Collection. Why? Because the brand included both an eggplant and a peach in their bath bomb launches. Yes, really, and given the brand's clever marketing around them, it was certainly no accident.

If you are looking for a Kim Kardashian approved scent for the upcoming holiday of love that doesn't have a bit of a hidden message, you've got more options than just her restocked Kimoji Peach scent. Kardashian is launching a whole new set of Kimoji Heart fragrances just in time for the holiday.

KKW Fragrances' new Kimoji hearts come in scents Baddie, Wifey, and Baby Girl. All three of the new scents from the brand feature floral notes, so if you're more into flowers than fruits, they may be more for your taste.

For fans of Kardashian's previous Kimoji Heart fragrances, though, don't worry. The KKW Fragrance mogul is also relaunching her original three scents in Ride or Die, BFF, and Bae. Basically, if you want a KKW Fragrance for your Valentine's Day celebration, you've got your pick of some Kardashian's new and previous launches.

If you want to start the new KKW Kimoji Peach fragrance, its available right now on the KKW website. Whether you love fruit scented perfumes or not, it's hard to deny that the timing of KKW Fragrance's restock is a little bit eyebrow raising in a hilarious sort of way. Whether Kardashian meant for their to be a bit of a double entendre or not, it's kind of a brilliant time for the scent to restock.