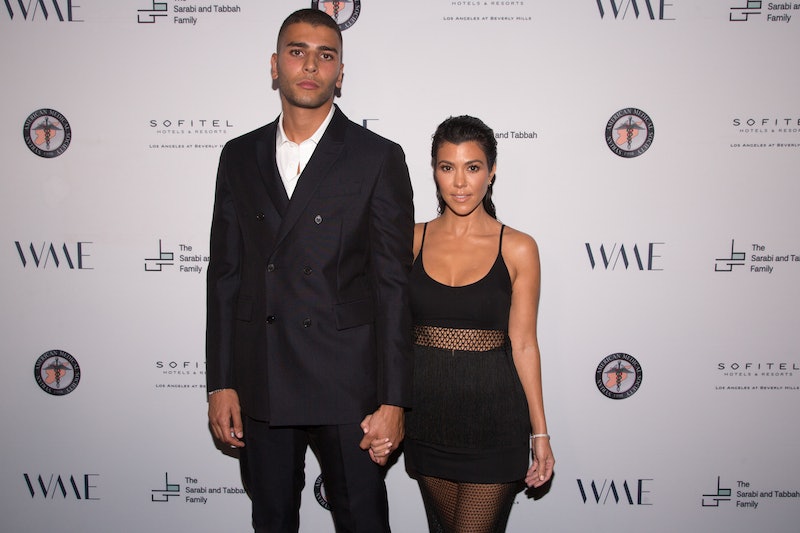 Could it be? Is a reconciliation on the horizon for the eldest Kardashian and her one-time beau? Eh ... probably not. Not according to a source for E! News, who recently spotted Kourtney Kardashian and Younes Bendjima having an unexpected reunion while out and about in Los Angeles, at least. Sorry to burst any bubbles out there.

It's been six months since Kardashian and Bendjima decided to go their separate ways after nearly two years of dating. Breakups can be tough regardless of the circumstances, but it seems as if enough time has passed for the pair to be comfortably cordial now.

As per a source for E! News, Kardashian and Bendjima recently ran into each other during a coffee run at Alfred Tea Room. "Kourtney bumped into Younes getting coffee at Alfred. It wasn't a planned meet up," the insider claimed. "She goes there often and so does he. She was happy to see him and very nice. It wasn't awkward for her and they chatted for a few minutes."

Aww. Well, that's good to hear. As anyone who has been in a similar situation before can attest to, unexpectedly bumping into an ex usually has a pretty high potential for awkwardness. Sounds like they both handled it like mature adults, though.

According to E! News' source, their reunion actually ended up going on beyond polite small talk. Don't get too excited — they weren't like, making out or holding hands or anything like that. Bendjima was reportedly standing in line ahead of Kardashian during their chance encounter. Once it was his turn to order, he bought her a latte, too, which is actually a really lovely gesture.

"It was sweet and she appreciated it," the insider told the outlet. "She gave him a hug and went on her way. He texts her from time to time but she has moved on. It was nice to see him and she was glad to see he's doing well."

Good for them. This isn't the first time Bendjima has publicly made an effort to show love for his ex following their breakup, though. In December 2018, the model posted several pictures of himself and Kardashian to his Instagram Story.

"Let's not forget about this beautiful woman inside and out. I'm not the type of man that forget [sic] moments like that," he captioned one of the photos. "You [sic] an amazing woman and mum and I hope you will find happiness for you and your childrens [sic]," he added. "It's all love at the end of the day. we don't know what can happen tmw so there you go."

Was Bendjima's shoutout an attempt to win Kardashian back? Who knows. It sure was sweet though, wasn't it? Him buying her a latte during their recent run-in was pretty sweet too, but — for now, at least — it doesn't sound like fans should be holding their breath for a reconciliation. Besides, being cordial acquaintances is way better than being bitter exes. Whatever works as long as they're both happy, right?

More like this
Kourtney Kardashian Shares New Photos From Her & Travis' Courthouse Wedding
By Bustle Editors
Kim Kardashian & Pete Davidson’s Reported Breakup Has Twitter Running Wild
By Brad Witter
Kim Kardashian & Pete Davidson’s Relationship Timeline From Start To Finish
By Jordyn Tilchen and Bustle Editors
Who Is Bad Bunny Dating? Gabriela Berlingeri's Vocals Are Featured On His Song "En Casita"
By Radhika Menon
Get Even More From Bustle — Sign Up For The Newsletter