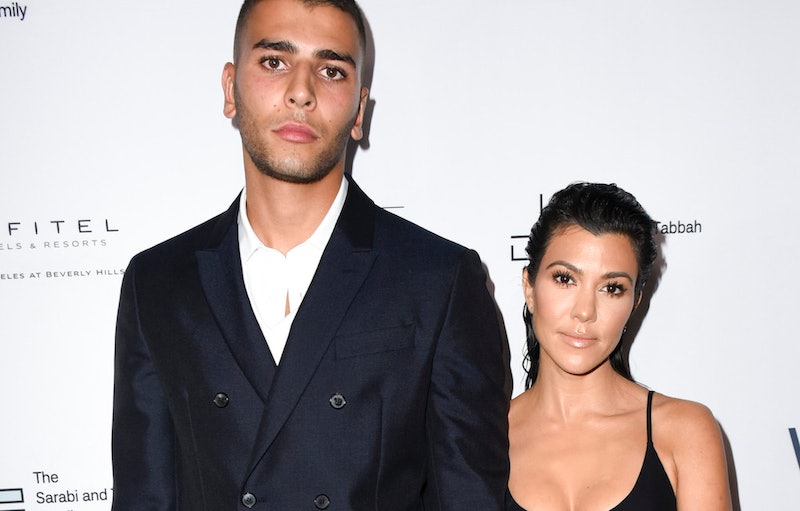 Due to some new Christmas snapshots, Kourtney Kardashian and Younes Bendjima are fueling dating rumors once again. On Friday, Kardashian took to Instagram to share holiday photos of the extended Kardashian-Jenner clan, and within the slideshow photos resides one sneaky snapshot: Bendjima with his arm around Kardashian near a Christmas tree. On the heels of the post, sources claimed to PEOPLE that the two are, in fact, an item once again and that Kardashian has “decided to give him another chance.”

“They have fun together,” the source told PEOPLE. “He seems very committed to Kourtney. She’s happy that they are back together. She didn’t want to hide the relationship any more. It was her decision to make it public again.” Bustle reached out to Kardashian’s rep for comment, but didn't hear back at the time of publication. Neither Kardashian nor Bendjima has confirmed whether they're actually dating again.

The reconciliation comes after Kardashian and Bendjima had been spotted out and about together earlier this month. The two were seen at Art Basel in Miami in early December, and later at Disneyland in Anaheim in mid-December. Earlier this week, a source told PEOPLE that a reconciliation would supposedly happen and cited Bendjima’s relationship with Kardashian and Disick’s three children, Mason, 10, Penelope, 7, and Reign, 5. “Not only was Younes a great boyfriend, he was also great with Kourtney’s kids,” the source said. “They really like him. It’s never easy being a single mom and dating, and Kourtney knows this.”

In an episode of Keeping Up With the Kardashians in November 2017, Kardashian offered insight into her relationship with Bendjima and revealed that they met at a bar in Paris, one day before Kim Kardashian’s infamous robbery. “He was friends with our friends. He would walk in, say hi, shake hands with, like, our security or whatever, but, like, not say hi to us,” she explained. “I was like, ‘Why do you hate us?' I was just drunk.”

She continued, “And then next night Younes was like, ‘Bring your ass here.'” Bendjima then proved to be helpful after the robbery. “When we walked into that club was when we went to the bathroom and got the phone call about Kim," Kardashian said. "Then he was like, 'I'm not leaving you guys,' and he, like, had to translate everything."

Could Kourtney and Younes be officially back on again? Only time (and additional Instagram photos) could tell.