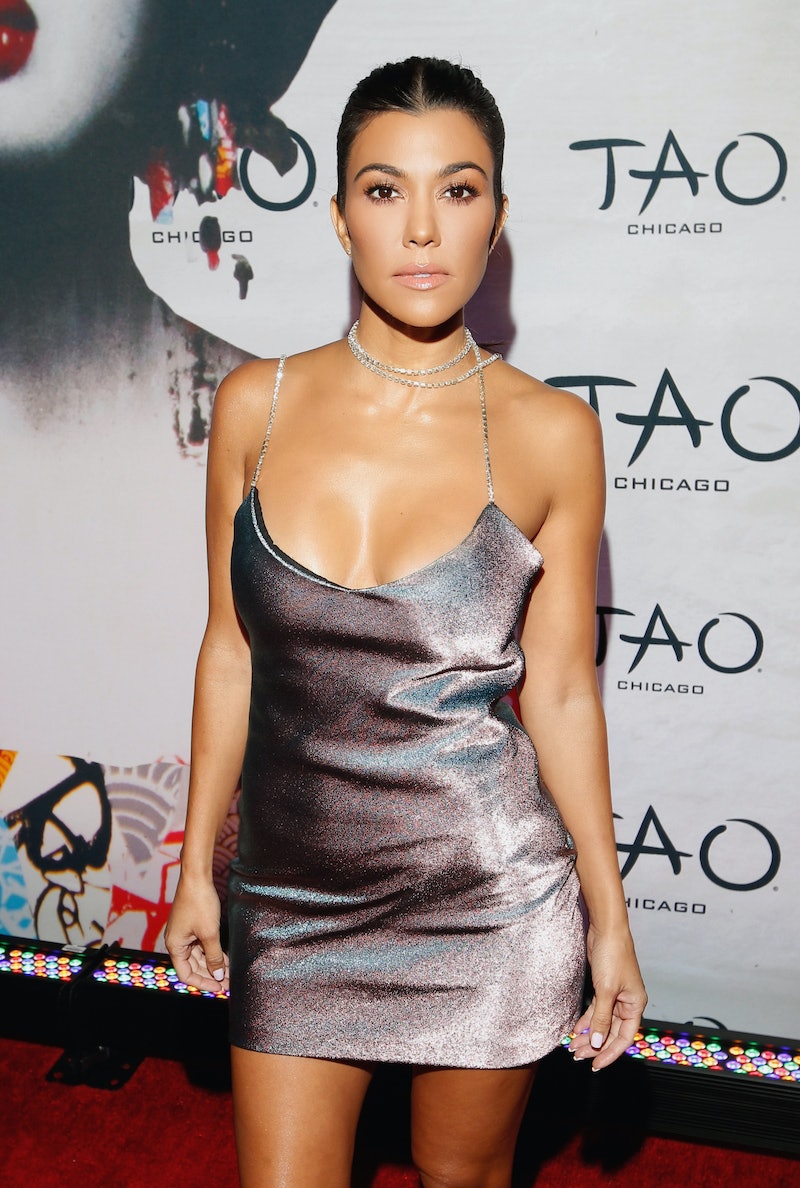 Kourtney Kardashian's birthday isn't until April 18, but, according to a new report, she already got a head start on the b-day celebrations. As Us Weekly reported, Kourtney Kardashian celebrated her birthday early with a family trip to Finland during the first week of April. But, the most interesting part about the excursion may just be that Scott Disick and his longtime girlfriend, Sofia Richie, tagged along, proving that it was a totally modern, family vacay.

Us Weekly reported that the crew, alongside Kardashian and Disick's three children — Mason, Penelope, and Reign — all traveled to Finland in early April to have some wintertime fun. The publication also reported that the Keeping Up With the Kardashians star shared a shot of herself posing outside of the Arctic Treehouse Hotel in Rovaniemi, Finland on her Instagram Story on April 7. Based on the hotel's website, the accommodations are the epitome of lavish (i.e. perfect for the Kardashians), as the rooms showcase panoramic views of everything from the Northern Lights to the Midnight Sun.

On April 8, Richie posted what appears to be a photo from the recent trip. The model, decked out in some chic winter-appropriate gear, posed in front of a cabin and captioned the pic with, "The North Pole." While the group didn't post too many other snaps from their vacation, it sounds like they had a super chill time in Finland (literally).

Kardashian and Disick are really nailing their co-parenting relationship, as this recent Finland trip shows. It also shows that the KUWTK star is on good terms with his girlfriend, Richie, as well, especially since this isn't the first time that they've all gone on a trip together. According to Entertainment Tonight, the model accompanied Kardashian, Disick, and the extended reality TV fam on their ski trip in Aspen, Colorado in late December.

In light of the skip trip fun, a source told ET that the three "get along great," and continued, "It took some time for everyone to be comfortable around one another. Kourtney sees that Sofia is good for Scott, who has been in a really great place, and [she's] happy for the couple."

The trio also spent some time in the sun, as they also took a trip to Mexico together in December to celebrate the holidays. Disick captured their successful co-parenting relationship in an Instagram pic, as he posed in between his ex and his current girlfriend as they posed poolside. He captioned it with, "What more can a guy ask for. THREE’S COMPANY." You can always count on Lord Disick to bring the jokes.

Kardashian and Disick are setting an incredibly positive example for what it means to be a modern family. In a recent interview on the Today Show in February, the KUWTK star even opened up about her co-parenting journey with her ex, and the pair's penchant for traveling together. She said:

“We travel together and … I think it’s a good message to show other people. I’m not doing it for that reason, but I think the positive things that we are doing, it’s nice, too.”

Kardashian and Disick, who split in 2015, have definitely come a long way in their co-parenting relationship. After all of their ups and downs, they're, thankfully, in such a good place right now.