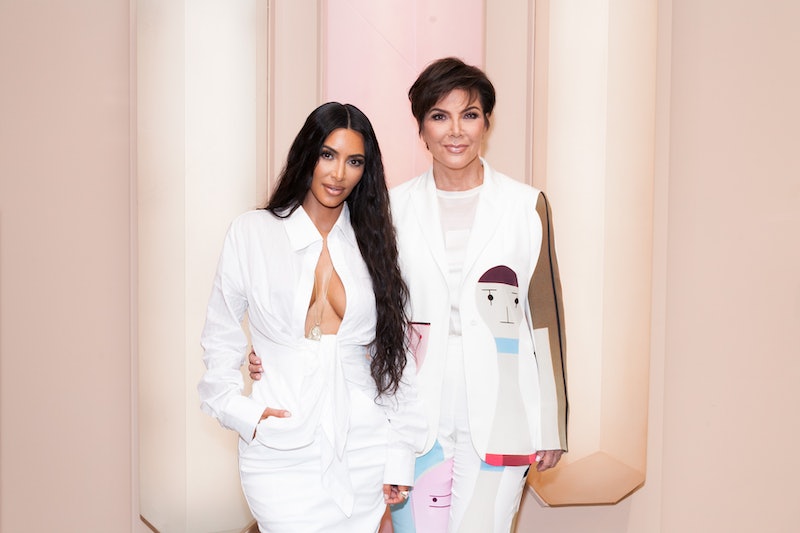 While the Kardashian family has been vocal about how they're celebrating this holiday season — by posting photos of Christmas trees and gingerbread houses alike — there's one tradition you shouldn't expect them to post about. Kris Jenner opened up about the Kardashian Christmas card and how there won't be one from the family this year, according to Us Weekly. And her comments about the break in tradition will help fans keep everything in perspective.

On Dec. 11, Jenner attended Tamara Mellon's opening party in the Pacific Palisades, where she took some time to chat to Us Weekly about the whole Christmas card issue. When asked about whether she was going to miss not having a classic Kardashian holiday card this year, she said:

"We take so many photos together that we’re so excited about, always doing photo shoots and stuff. We have a photo shoot on Thursday, so there’s always something."

Jenner makes a great point. The family does always post some of the best photos on the internet. And there's going to be a new photo shoot featuring the family on the way soon, according to the momager. So, even if they aren't posting a Christmas card-themed photo amongst them, fans should rest assured that they'll be able to see their regularly scheduled KarJenner content on Twitter and Instagram.

Jenner isn't the only member of the famous family who's opened up about the lack of Christmas card this year. In early December, Kim Kardashian spoke to E! News about the family's decision and gave a little bit more background into why her mom is not down to coordinate a photo shoot for her many family members. Kardashian told the publication,

"Kris Jenner has given up. She just is like, 'I don't have the energy to wrangle all my kids anymore, and their kids'."

She also revealed that last year's drama definitely had an impact on their choice to forego a holiday photo shoot this year, which shouldn't exactly come as a surprise to anyone who watched that play out on Keeping Up With the Kardashians. "I have to say, in thanks to last year's Christmas card, that really did just f*ck us over," Kardashian told the publication, "That was so dramatic."

In case you didn't watch the background on last year's Christmas card on KUWTK, it really was, as Kardashian said, "so dramatic." Since all of the family members have such busy schedules, it was rather hard to figure out a day when they could actually plan to shoot the card together. This led to a major fight between Kim and Kourtney Kardashian, which resulted in a now-infamous insult that the KKW Beauty mogul threw her sister's way. So, maybe it's a good idea for the family to take a break from the Christmas card stress this year?

In past years, the family has all gathered to pose for some of the most glamorous Christmas looks ever for their holiday card. While you won't get to see any Christmas glam this year, at least you can always count on the KarJenner family to post some fabulous, non-holiday looks on the daily.