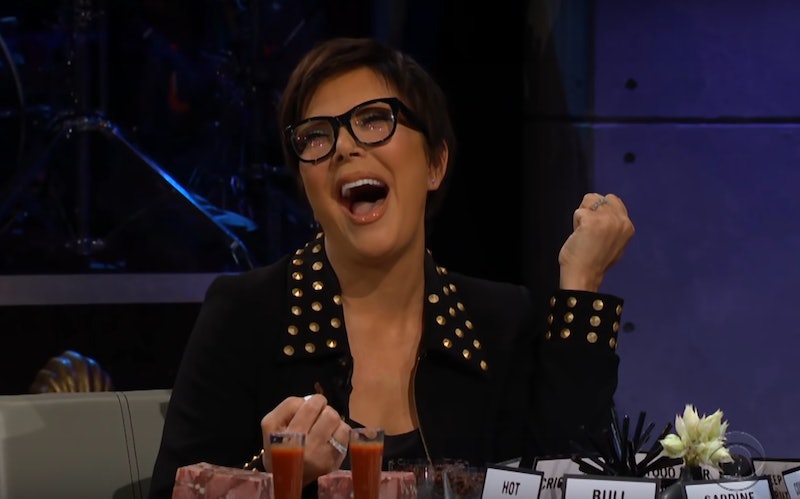 Look, if you're going to wear a giant diamond ring on *that* finger, people are going to ask about it. The Kardashian-Jenners, however, answer to no one. Not until they're good and ready and have their social media reveal planned out. So, Kris Jenner's reaction to engagement rumors about her and Corey Gamble involved eating a cricket, instead of actually confirming anything, during a rousing game of "Spill Your Guts or Fill Your Guts" on The Late Late Show With James Corden, as Cosmopolitan reported.

Let's circle back to that: Kris Jenner. Ate. A cricket. On television. While wearing that suspicious — I mean, totally casual and non-committal — ring. Yep. (Bustle previously reached out to Jenner's agents when engagement rumors first surfaced, but did not hear back.)

In case you're not familiar, the way the game works is thusly: Corden sits across a Lazy-Susan-type table with a guest (in this case, Jenner). Placed around said table are an array of gustatory abominations (which in this case included bull penis, deep-fried butter, and crickets, among others). Each "contestant" starts a round by choosing an aforementioned abomination for their opponent to consume, should that opponent opt out of answering a gossip-inducing question.

After a few very entertaining rounds (more on that later), Corden — who had chosen crickets for Jenner — presented the momager with the following question: "You've be spotted wearing a massive diamond ring on your wedding finger," he said. "Are you and Corey Gamble engaged?"

The camera panned side-stage to show Gamble laughing nervously. "I mean, the ring's right there," Corden pointed out. "It's a real giveaway." Sadly, Jenner refused to respond, and instead placed a dead cricket squarely on her tongue. (She did appear to spit it out into a bucket at the end, though.) Ah, the things that family will do to keep a secret.

Perhaps you remember when Kim Kardashian suffered a similarly torturous fate while on Corden's show back in November 2017? The host asked the mogul to either confirm or deny the then-rumors that sisters Khloé Kardashian and Kylie Jenner were both pregnant. Instead of responding, though, Kim chose to take a sip of a nasty sardine smoothie.

During that same game, however, Kardashian happily ranked her family members from most to least stylish (Kendall, Kris, Kylie/Kourtney, Khloé) and also happily offered up Kanye's most annoying habit (falling asleep in public). So, if Kim's avoidance of the "rumors" was any indication, it's probably safe to assume that Kris Jenner may actually be engaged. Although, to reiterate, that hasn't been confirmed by either Jenner or Gamble yet.

At least viewers got a few juicy tidbits from Corden while he played along with the Kardashian-Jenner matriarch, though. When asked why he'd yet to do his famous "Carpool Karaoke" segment with her son-in-law Kanye West, Corden was delighted to respond.

"We've tried," he told her. "He's canceled twice, maybe even three times. He canceled once as I was turning the corner to his house." Yikes. To be fair, Corden said that West sent him a pair of Yeezys and a very Kar-Jenner cube of flowers to apologize after he bailed on the show. So, that was a nice gesture.

At this point — now that she's been asked about it point-blank on network television —  it's probably going to be pretty tough for Jenner to hide behind that giant diamond ring for much longer. If her rumored engagement reveal goes the way of the rest of the Kar-Jenner secrets, though, fans can probably expect the news to pop up on the family's social media (or an upcoming episode of KUWTK) sometime soon.