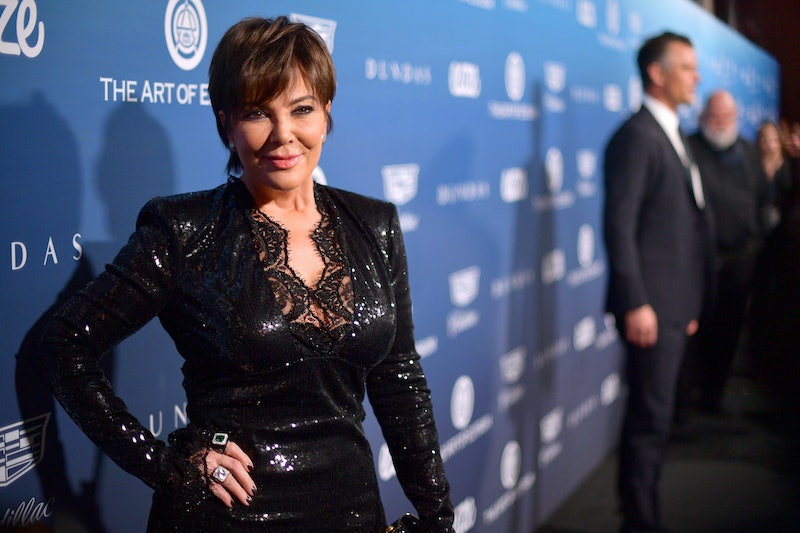 As you may have heard, there's reportedly going to be a new addition to the ever-growing Kardashian-Jenner family. According to People, Kris Jenner commented on Kim Kardashian and Kanye West's baby rumor. And she did so in classic momager fashion.

In an interview with Extra, Jenner offered up her first response to recent reports stating that Kardashian and Kanye West are reportedly set to welcome their fourth child via surrogate. Extra's Mark Wright told the reality star, "It looks like [your family] is expanding, Kim and Kanye having another baby." But Jenner neither confirmed nor denied the news. Instead, she chose to stay mum and keep fans guessing.

Jenner told Extra, "Well … it’s always a full house!” Her statement could be read as a both an accurate statement about the growing KarJenner crew or a subtle way to comment on there being yet another baby on the way to bring into that "full house." Seeing as though she kept her response vague, it's likely that Jenner does not want to confirm the news herself at this time. After all, it's Kimye's news to share, and it could be that the couple is waiting some time to officially confirm the news themselves.

When it came to announcing the news about their third baby, Chicago West, it was widely reported in June 2017 that the Wests were about to become a family of five, per TMZ. However, they did not officially announce the news themselves until September 2017, when Kardashian was heard saying, "We're having a baby!" in a sneak peek of Keeping Up With the Kardashians Season 14, according to E! News. So, it could be a while until they confirm the happy news publicly.

But, as previously mentioned, multiple sources have already reported in early January that Kardashian and West are set to welcome their fourth child together this year. (Bustle reached out to Kardashian’s rep for comment at the time that the reports were published, but did not receive an immediate response.) According to Us Weekly, the couple will welcome their second boy into the world via surrogate "in very early May." A source told the publication that the reality star has “always wanted four kids."

A report from E! News, published on Jan. 3, offered up even more details about the baby rumor. They reported that a different surrogate from the one who carried Chicago is carrying the couple's fourth child. An insider told the publication that "the surrogate is well into the pregnancy," and continued to say:

"She is due in May and everything looks good. Kim and Kanye have known for awhile and are very excited. They had one male embryo left and are thrilled it has worked out. Kim always wanted four kids and having two boys and two girls feels perfect."

Apparently, the couple was happy with how their experience went with their surrogate for baby Chi, who they welcomed in January 2018, that they decided to go with that same route again. A source told E! News, "They were very happy with the entire experience the first time and are so grateful to have one more baby."

If the news about this fourth child is true, the KarJenner family (and Kimye, specifically) will always have a "full house" on their hands.