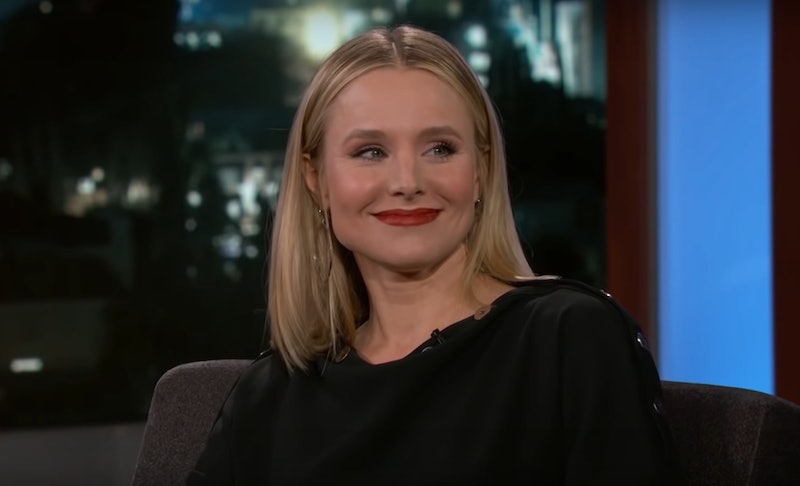 It happens to the best of us. Maybe you said you loved a movie that was actually pretty "meh," or maybe you feigned long-term enthusiasm in support of his favorite sports team. In the early stages of dating, most people just want to be liked — which is exactly why Kristen Bell got her motorcycle license when she first start seeing Dax Shepard, as Entertainment Tonight reported.

"What did you hide from Dax?" Kimmel replied. "Well," Bell started, "He loves motorcycles ... I really wanted him to think that I also loved motorcycles a lot, and so, when we first started dating, I decided to get my motorcycle license." Damn. That's way more serious than like, pretending to care about the New England Patriots for a few months a year. She really committed.

After two weeks of lessons, Bell passed, and revealed her success to Shepard in the most adorable way (no surprise there, as everything Bell does is endearing). "I framed [the motorcycle license], and I taped [the moment she passed] on a flip camera — remember flip cameras? — and I gave it to him for Christmas. And I was like, 'Motorcycle license? Me too.'" Casual. No big deal. What, like it's hard?

"And did he love that [the gift]?" Kimmel asked. "Yes," Bell replied. "Well, he immediately started giggling, then he watched the flip camera. He was way more concerned about the fact that both mirrors were torn off the bike," she confessed. "But I said, 'Look. I rode hard.'" And then, according to Bell, she never drove a motorcycle again. Amazing.

Shepard was obviously impressed by Bell's one-time hard-riding, as the couple would go on to get married, have two kids, and are now coming up on their 5th anniversary. Shepard, for his part, also had some major moves up his sleeve when he and his now-wife first started dating.

Back in July, Bell used Instagram's new question feature to field some fan inquiries. "What pickup line did Dax use on you?" one person asked. "Truly," Bell replied, "his first text to me was: 'hi. My name is dax. I violated your privacy and got your number from shauna. How do u feel about that?' And I thought... what the hell?? This kid is sassy!!"

Bell clearly wasn't bothered by Shepard's invasion of her privacy, as evidenced by the great lengths she'd end up going to in order to win her man over. Getting her motorcycle license probably wasn't so necessary, but it definitely proved to Shepard that she was — quite literally — his ride-or-die.