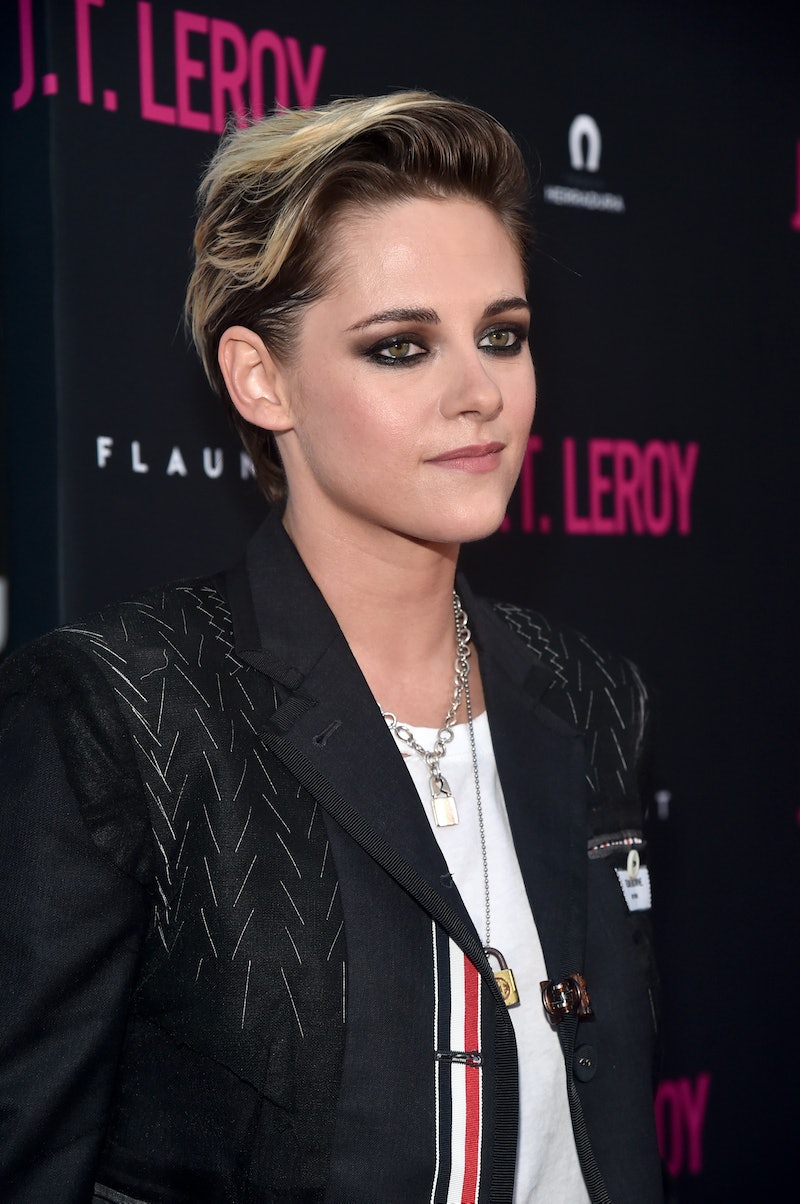 If you're having trouble with your brows, do what Kristen Stewart did and just get rid of them entirely. Kristen Stewart has no eyebrows now, and it's kind of working for her. Stewart debuted the hairless look at the Chanel Metiers d’Art runway show in Seoul, South Korea on May 28, where the brand ambassador stopped on the stairs to pose for photos. Stewart naturally wore head-to-toe Chanel, pairing her sheer button down shirt with leather high waist shorts and thigh high boots.

Granted, the outfit was decidedly tame for the regular fashion-rule-breaker, especially seeing how Stewart famously loves messing with Cannes Film Festival dress codes. But Stewart's beauty choices were what brought punch to the look. Stewart walked the red carpet with neon eye makeup, grungy bleached hair, and no eyebrows.

Stewart's brows were bleached into oblivion, giving the appearance that they weren't there. This helped her neon green cat eye stand out, which was created by makeup artist Beau Nelson. To add to the color pile-on, Stewart also wore a mismatched manicure, sporting both yellow and red nail polish.

This bleached look is part of a beauty evolution that started on the red carpet of the 2019 "camp"-themed Met Gala. Just like at Chanel's Seoul runway show, Stewart showed up to the Gala wearing a decidedly tame outfit that became memorable because of her beauty choices.

Stewart's inspiration for her Met Ball look was the king of camp himself, David Bowie. "The inspiration was '70s Bowie and the obscurity of gender, playing into both masculine and feminine extremism," Stewart's hairstylist, Adir Abergel, said in a press release.

Channeling Bowie in The Man Who Fell to Earth, Stewart colored her hair a neon red. Wanting to play off the bold color, Stewart's makeup artist for the event, Jillian Dempsey, wanted to bleach her brows. But the coloring process didn't go according to plan.

“I was so excited to de-virginize them,” Dempsey told The Cut. “I originally wanted to pop them out to a white color, but I removed the bleach prematurely and it was this cool banana color." But Dempsey didn't panic. Instead, she leaned into the unexpected color reveal. "Instead of toning it down, I just left them raw and punk," Dempsey said.

Now Stewart has transitioned from her neon brows into barely-there bleached white arches. Stewart isn't the first to rock missing brows, even though the beauty trend is few and far between.

In 2013, Miley Cyrus tried out the invisible brow trend, completely changing up her look.

Back in 2014, Kim Kardashian tried the bleached brows look during Kendall Jenner's 19th birthday party. Kardashian just came back from a photo shoot and decided to keep the bleached look for the evening.

Then in 2016, Katy Perry came to the Met Gala with bleached white brows and an inky black beehive. According to Leslie Fremar, Perry's stylist, it was a choice that Perry made all on her own. “If it were up to me would she have had eyebrows? Yes. But you know what? It wasn’t up to me,” Fremar told PeopleStyle. “She really did just want to be bold, take risks and embrace the night. She wanted to have to have fun with it. She’s freaking Katy Perry! That’s what she does — she has fun!”

Follow in the footsteps of these bold women this summer and bleach your own arches for a fun, out of the box beauty look.