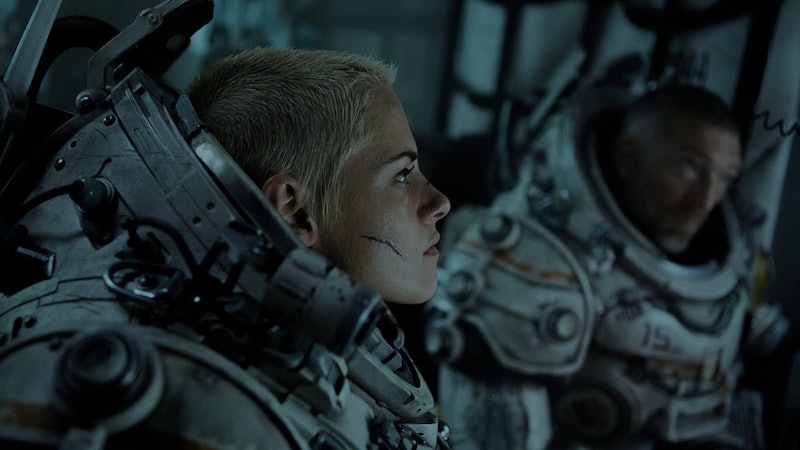 When it comes to beauty, Kristen Stewart has been doing what she wants, when she wants for years now. Whether it's donning sneakers on a red carpet or rocking a pink pixie cut, the actor follows her own rules. Kristen Stewart's shaved head is another one of those examples, but this time, it's a result of the Underwater star combining both her acting and her personal approach to beauty.

In her new film Underwater, Stewart plays a mechanical engineer on a rig deep below the ocean's surface. An earthquake shakes the station, and well, nothing great happens from there, according to the trailer. One thing that seems to have stood out for fans of Stewart's, however, is her hair in the film (aside from the monsters). In the trailer, you'll see that the actor buzzed her head for the role and dyed it blonde.

Bustle spoke with Stewart about her decision to do so, and she shares that shaving her head turned out to be a mix of understanding who her character is and also doing something she simply felt like doing for herself.

"To be super straight up, I actually did just sort of find it to be a nice excuse to do it because it's something that I've wanted to do for a long time," she tells Bustle. "I was genuinely just excited to shave my head and bleach it because I thought it looked cool."

While yes, her hair does look awesome in the film, the new style for the actor was also a decision she made on behalf of her character. According to the actor, the underwater suits the cast wears in the film take 20 minutes to get into and another 20 minutes to get out of. The sheer amount of time it takes to don the gear made Stewart think about her character's reaction to wearing the suits.

Stewarts says, "The idea of having to get your head into the helmet and then have that rogue stupid hair in your face? Then you have to come all the way back out? It was partly because I thought it was practical, and this person, in the beginning of the movie, is not incredibly tender or nice to ourselves. So I feel like she would be someone who was like, 'F*ck it. I just won't have hair.' Do you know what I mean? It made sense."

While Stewart's shaved head made sense for her Underwater character, the actor clearly isn't one to shy away from bold beauty decisions in her personal life. This time, she just happened to get to do both.