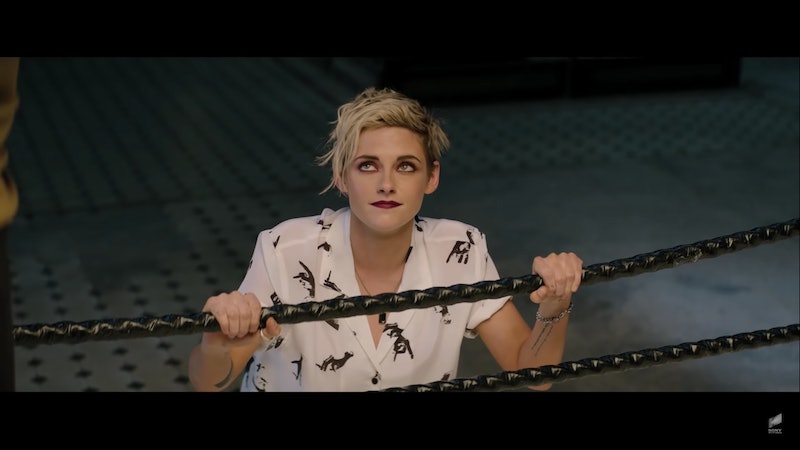 While movie fans may be awaiting the theatrical release of big summer blockbusters like Spiderman: Far From Home, a trailer drop has actually made Twitter get up in arms. On June 27, the first trailer for the Elizabeth Banks'-helmed Charlie's Angels made its debut, and it's Kristen Stewart's hair in the trailer that's basically making Twitter users faint.

The new Charlie's Angels film directed and written by Banks stars Stewart alongside Aladdin star Naomi Scott and actor Ella Balinska. Of course, the trailer shows all three women kicking some major bad guy butt, and the comedy from the first film franchise has also stuck around according to the trailer. While seeing the first look at the rebooted series is exciting for fans of the original television series and the older films starring Drew Barrymore, Cameron Diaz, and Lucy Liu, people on Twitter seemed most jazzed about Kristen Stewart's hair.

In the film's trailer, Stewart is sporting a shaggy pixie cut with platinum blonde tips and a black shadow root. While it's the cut and color that she's been rocking in real life for a while now, seeing it on screen has really gotten people in their feels. Honestly, it's not hard to see why.

Stewart's hair in the Charlie's Angels trailer actually goes through several different changes thanks to wigs. From long blonde locks to a brunette up do to a blonde ponytail, she basically wears it all, but it's her pixie cut that people can't stop talking about.

The cut looks incredible on Stewart, and it seems like it can be worn about 8,000 different ways.

However, she also wears it down around her face as well.

Someone tell Stewart immediately that her hair looks sexy pushed back.

Fans are already singing praises of the look just from the trailer alone.

While there are tons of reasons to go see the film as noted in the tweet above, Stewart's hair is at least three of them.

Some are even using Stewart's Charlie's Angels look as inspiration for their own locks.

Others are having trouble recovering from the beauty of it.

While that incredible pixie takes the cakes for the actor's styles in the trailer, fans are also stanning everything about her hair in the film.

While the short length is common on Stewart, the last time she hit a red carpet, her beauty look was decidedly different. At the 2019 Met Gala, the actor appeared with pink ombre hair (the color of the night) and totally bleached out brows with eyeliner details that were definitely David Bowie-esque. It's a look she kept going later into the month of May when she attended the Chanel Metiers d’Art runway show in Seoul, South Korea.

Whether Stewart has bleached brows, a killer pixie cut, or is crushing some wigs, the actor's look is versatile to say the least. Her latest project as Sabine in Charlie's Angels, though, may just have fans saying its her best look yet.