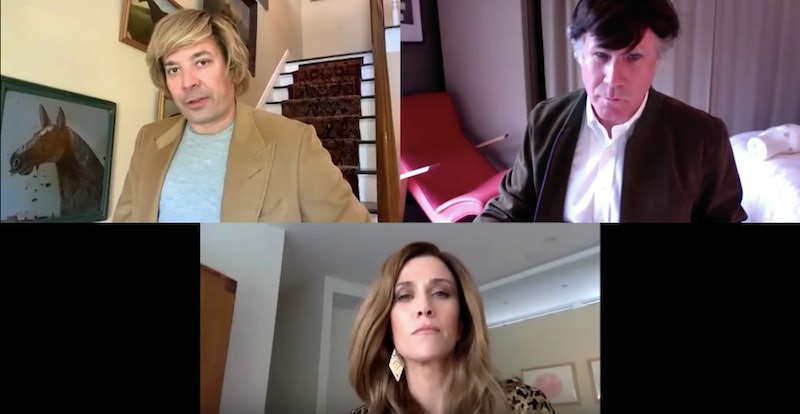 All of the networks' real daytime dramas have stopped production due to the novel coronavirus pandemic, but thankfully, Kristen Wiig and Will Ferrell filmed a quarantine soap opera to fill the void. On Wednesday, April 8, the comedy favorites teamed up with Jimmy Fallon for a The Tonight Show sketch that expertly spoofed Days of Our Lives. Thanks to social distancing, Fallon is filming his show from home with guests appearing virtually — a set up that led to the best kind of absurdity as the host, Ferrell, and Wiig performed "The Longest Days of Our Lives" from their own homes.

In the sketch, Wiig plays Vanessa a woman who cheated on her boyfriend Winston (Fallon) with his brother Alejandro (Ferrell) through "like, Skype or something." But there's a twist! She actually cheated on Winston with his other, other long-lost brother leading to a truly impressive number of quick changes from Ferrell. This revelation is followed by more twists including an amnesia plot, lots of self-slapping, and the appearance of the Charmin heiress (as played by Wiig).

The whole thing is reminiscent of Saturday Night Live's popular "The Californians" sketches, which Wiig often appears in, but at its heart this exercise in quarantine entertainment is a tongue-in-cheek homage to the entertaining silliness of soap twists. It's also a reminder that Wiig and Ferrell know how to make comedy magic together.

In addition to being SNL alums, Wiig and Ferrell have appeared in four movies together: Semi-Pro, Anchorman 2, Zoolander 2, and, most importantly, Lifetime's A Deadly Adoption. Clearly, they have stellar comedic chemistry, and they can also crack each other (and Fallon) up, as evidenced in their soap opera sketch. At multiple points, all three stars end up breaking character as they stifle their laughter, but who could blame them for giggling when they're literally slapping themselves in the face.

Wiig and Ferrell seem to have a special gift for making melodrama magical. Their 2015 Lifetime movie A Deadly Adoption was played entirely straight and aired on the network with no explanation as to why two Hollywood heavy hitters were appearing in a low-budget TV movie about a psychotic nanny. At the 2017 ATX Festival, Ferrell said the movie was "one of my favorite things I’ve ever made." He added that was "partly because it completely baffles maybe 80 per cent of the audience."

As long as Wiig and Ferrell keep creating unexpected, but welcome entertainment like "The Longest Days of Our Lives" and A Deadly Adoption, viewers will surely welcome the bafflement.