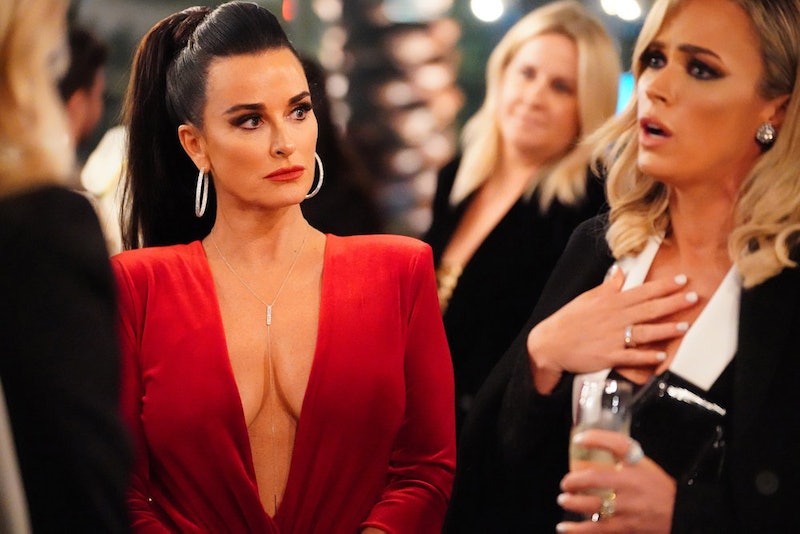 Alliances change like the tide on shows like Real Housewives Of Beverly Hills and the latest duo to gang up on everyone else is Kyle Richards and Teddi Mellencamp. Teddi hasn't been on the show long, but she's found herself in skirmishes with everyone from Lisa Vanderpump and Dorit Kemsley to Erika Jayne and Lisa Rinna. She's covered a lot of ground for a new Housewife. Kyle has been a Housewife since day one, so perhaps Kyle and Teddi's RHOBH friendship timeline is just Kyle showing Teddi the ropes.

Teddi showed up in Season 8 of Real Housewives Of Beverly Hills as a low-key antidote to the over-the-top antics of Housewives like Dorit and Erika. Teddi is John Mellencamp's daughter and she's down to Earth and chill, unlike some of the other women. It's hard to say whether or not she's gained her footing on the show — especially with the puppygate saga and this latest attempt to stir the pot between Erika and Rinna. But if you have Kyle on your side, you're in good shape.

Still, it was surprising to notice that Kyle and Teddi are super tight these days. When did that happen? It's a relationship that seems to have popped up out of nowhere, though it was obviously brewing long before LVP and Kyle duked it out. How did we miss this? Let's see how their relationship has progressed over the past few months.

Teddi's inaugural season started slow — at least for Teddi. The woman that Teddi immediately did not get along with was Dorit. It was the perfect clash of personalities, but also communication styles. Kyle had to step in during PK's birthday party to try and translate to Dorit what Teddi meant when she was apologizing in order to just stop the fight from progressing. That show of diplomacy resulted in Kyle being labeled as on Teddi's side.

Dorit responded to this later at Teddi's beach house by telling Erika that Kyle and Dorit were speaking badly about her after she left to go stay in a hotel. Again, Kyle and Teddi found themselves on the same side just out of sheer circumstance.

Anyone who has been watching this season knows about Lucy Lucy Apple Juice, and perhaps it's this saga that drove Kyle and Teddi together and Kyle and Lisa apart. Teddi was ready to be involved in Vanderpump's shenanigans, but she quickly changed course when she realized how Lisa would come off smelling like a rose no matter the storyline.

Lisa's ability to reportedly manipulate plot points is a sore subject with the ladies. and it's what ultimkately tore her and Kyle apart — Kyle wanted to know if it was true, and instead of having a discussion with her, Lisa went full Trump on her, demanding loyalty and nothing else.

Kyle has been licking her wounds all season and hanging out with the other ladies — including Teddi. There's something that unites these women together, and it might be the injustices they face at other's hands. It also might be that they like to stir it up. Either one. Right now, Kyle and Teddi are friends, and that probably won't change.

There you have it — Kyle and Teddi are not yet Vanderpump-and-Richards levels of BFF (RIP), but they could be on their way. As long as they don't pick fights with each other, that is.