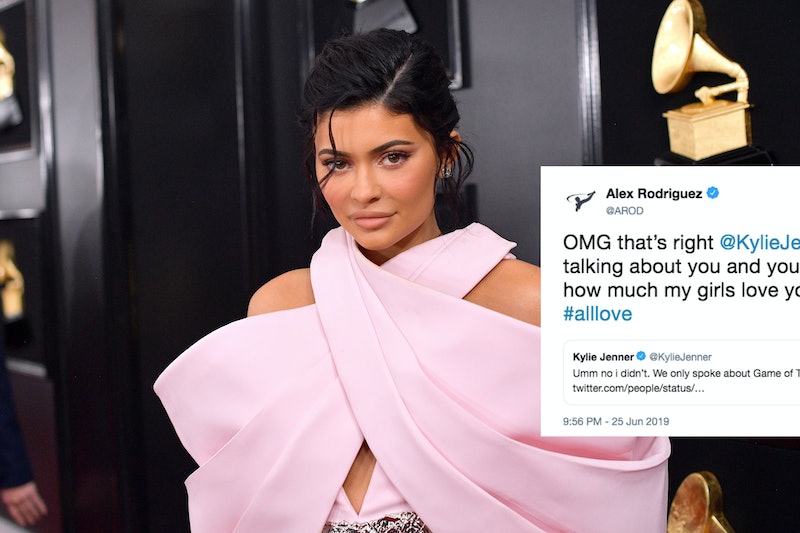 New celebrity beef alert. Bet you never saw this one coming, though. While it's certainly not the most dramatic feud to make headlines in recent Hollywood history, it could very well be one of the most head-scratching. On June 26, Kylie Jenner debunked Alex Rodriguez's comments about their Met Gala conversation, as reported by People, and the whole thing is kind of awkward.

OK, so, here's what went down: Sports Illustrated interviewed A-Rod over the course of a few days earlier this year. One of the days they were following him around was right after the Met Gala. "We had a great table," he told the outlet. "The black guy from The Wire — Idris Elba, yeah, and his new wife. Some famous singer next to me, I don’t know what her name is. Versace—Donatella. We had Kylie and Kendall. And we had an Asian gentleman from Rich Asians, the lead."

First of all, it's pretty surprising that someone as famous as Rodriguez has such a hard time identifying other celebrities. But, whatever. That's not what we're here to discuss. What we're here to discuss is the next thing he said, in regards to Kylie Jenner. "Kylie was talking about Instagram and her lipstick, and how rich she is," he revealed to the outlet.

Now, to be fair, it's unclear whether or not A-Rod said that in jest. Jenner is undoubtedly associated with Instagram, her cosmetics line, and, well, being wealthy — so, maybe he was like, "What did we talk about? All of the things that people know her for, duh. Ha ha ha."

Jenner, for one, did not take Rodriguez's comments as a joke, though. After People tweeted a headline that read, "Kylie Jenner Talked About 'How Rich She Is' at the Met Gala, Says Alex Rodriguez," the mogul responded with a short, succinct comment. "Umm no i didn’t," she wrote. "We only spoke about Game of Thrones," Jenner clarified, followed by the shrugging emoji and face-palm emoji.

Well, Rodriguez ended up catching wind of what Jenner had to say about his interview, and then took to Twitter himself to iron things out. "OMG that’s right @KylieJenner!!" the former athlete agreed. "It was me talking about you and your makeup line and how much my girls love you. #GOT#respect#alllove."

Hmm. So, did he just like, misremember the details of their chat, then? Who was he talking to about Jenner's makeup line and how much his girls love and respect her? J.Lo? Donatella Versace? Because according to Jenner, all they spoke about was Game of Thrones.

So weird, right? Can someone else from that table chime in here? Surely, Kylie's sister Kendall was in the vicinity when this all went down. Idris Elba, any comment? Or what about like, a waiter that happened to be passing by at the time? Anybody? Bueller?

*Sigh* Seems like we'll just have to settle for this he-said-she-said version of the story until somebody else steps forward to clarify. Perhaps no one else will clarify, though, and another celebrity beef will eventually just drift into the voids of our minds.