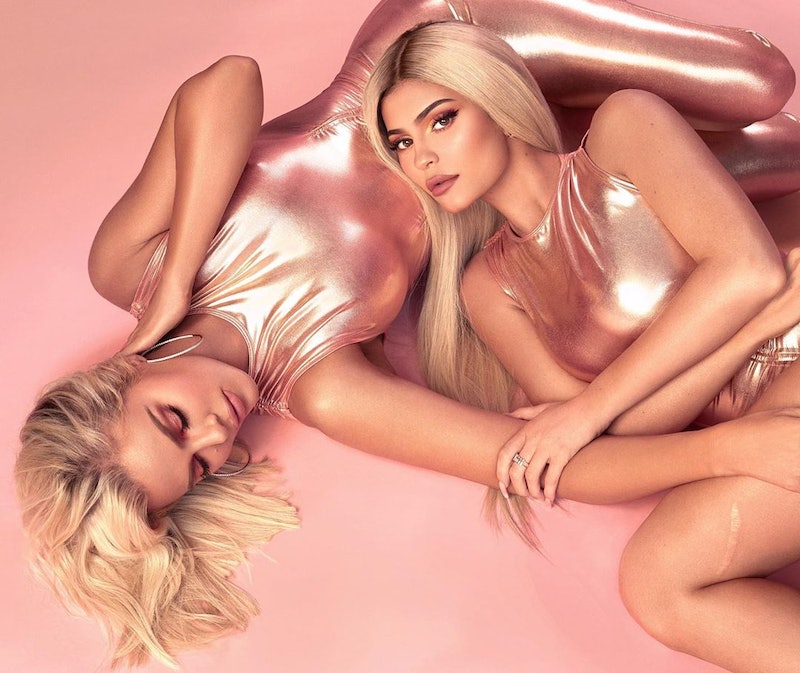 Kylie Skin may be the Kylie Jenner brand on everyone's lips right now, but don't forget that this celebrity started her empire with makeup. Now, there's a new Kylie Cosmetics KoKo Kollection coming makeup fans' way, and it'll remind everyone that Jenner is a multi-tasking mogul.

On June 9, Jenner took to both her brand's and her personal Instagram accounts to announce that another collaboration with her sister Khloe Kardashian was on its way. The new KoKo Kollection marks the third time that the Kylie Cosmetics and Kylie Skin owner has worked with her sister Khloe to create new products for her makeup line. Plus, it makes Kardashian Jenner's most collaborated with sister.

The gorgeous rose gold packaged collection includes a brand new highlighter, two matte liquid lipsticks, a lip liner, and a KoKo eyeshadow palette that you've got to see. The palette is a perfect mix of rose gold tones and transition shades, and while the colors are gorgeous, there's something a little extra special about it. According to Jenner's original Instagram story reveal, every shade is named in honor of Kardashian's daughter True Thompson including ones called True's Mom and Dreams Come True.

If you've already got the first two KoKo Kollection and must have the third, mark your calendar for the products' launch on June 14 at 3 p.m. PT

As for the pricing, the costs are in the typical Kylie Cosmetics range. Ahead of the June 14 launch, Jenner's brand revealed all of the prices on its Instagram account. If you want to snag all of the products in the new KoKo Kollection, expect to pay $95. If you don't need everything, tough, the palette will retail for $42, lipsticks are $17 each, the highlighter is $20, and the lip liner is just $12. If you do decide to buy the bundle, though, you'll essentially be getting the liner for free.

Jenner and Kardashian also have something else up their sleeves, though. The original KoKo Kollection lip shades as well as the lipsticks from the second In Love With KoKo Kollection have gotten a revamp and new packaging. According to a post from Kylie Cosmetics, the shades are now in an all new formula. They'll be launching alongside the new items on June 14.

While Kardashian may be on her third collection with Jenner, the Kylie Cosmetics creator hasn't left any of her sisters out of the fun. In fact, in a recent vlog uploaded to her YouTube channel, Jenner revealed that she and older sister Kendall Jenner are in the process of working on a collection together. Kendall's work with Kylie Cosmetics means that all of Jenner's sisters have now been a part of her beauty brand.

While you're waiting for the upcoming Kylie Cosmetics x Kendall Jenner collaboration, why not shop the new KoKo Kollection? If you want to get this set of Khloe Kardashian created products, mark your calendar for June 14. The rose gold set of products is coming just around the corner.