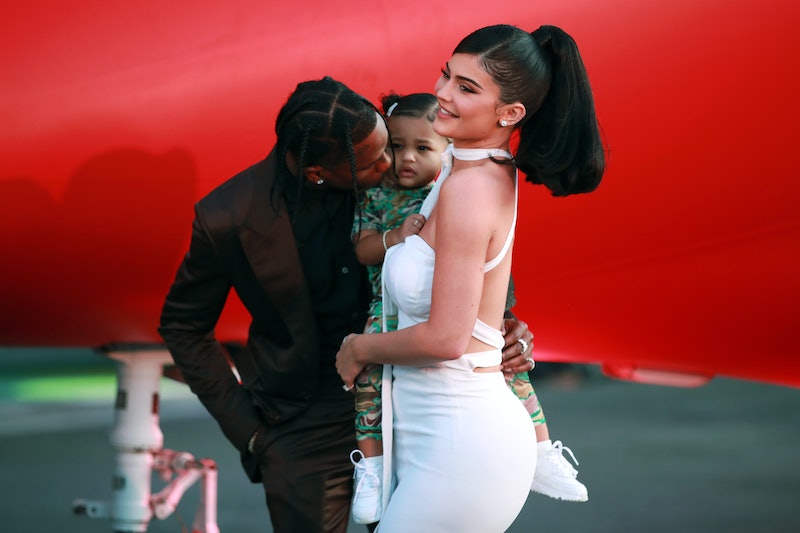 Celebrity babies are just like any other. Their parents also fuss over all of their milestones like walking, talking, and hitting their first red carpet. Well, that last one isn't the most relatable, but Kylie Jenner and Travis Scott's daughter Stormi recently made her red carpet debut. Additionally, Kylie revealed that Stormi said her most complex word yet, which is pretty exciting news for any one and a half year old.

In an interview with E! at that red carpet event, for Travis' Netflix documentary Travis Scott: Look Mom I Can Fly, Kylie was asked if Stormi was a "scene stealer" in the movie. Kylie confirmed that her daughter "always steals the scene." One reason that little Stormi steals the scene because she "says a new word every day," according to her proud mother. Specifically, the billionaire revealed, "This morning it was trampoline."

She recalled, "I'm like, 'How do you know how to say trampoline? You're one and a half.' She's so smart." And apparently she loves trampolines, which seems pretty random, but it does make sense that she said the word recently. For Kylie's 22nd birthday, the family celebrated with a trip to Europe. While they were in France, Kylie and Travis took Stormi to a park that had a trampoline. Maybe that vacation is what sparked Stormi's interest.

The trampoline revelation wasn't the first time that Kylie shared her little girl's milestones when it comes to talking. In November 2018, Kylie shared a video of Stormi playing with a Kylie Cosmetics eye shadow palette.

Behind the camera, Kylie tried to get her daughter to say the words "Kylie Cosmetics," which would have been very impressive for a child that young. Not only that, but if she did say it, it would have been a great marketing opportunity for the makeup brand. Who knows, maybe Stormi will do product reviews or product demonstration videos for her mother's company one day.

Stormi hasn't said "Kylie Cosmetics".... yet, but she did say "dada" a couple of times in the video, which is very sweet.

While Stormi is still working on her words, she's also learning some animal sounds, too. On March 11, a Kylie shared a Snapchat video with a puppy filter where Stormi says "woof woof." How paw-fect! In another Snapchat video, the mother/daughter duo saying the word "hi" over and over again. While they were at it, Kylie and Stormi also said the word "bye" in a different video. Clearly, they have their salutations down pat.

On March 18, Kylie posted a video holding Stormi with the caption "i love our little conversations." In their "conversation," Kylie told her daughter, "Girl, you gotta do things without me." In response, Stormi said "Yeah" a couple of times. At least they were on the same page during that discussion.

If Stormi can say the word "trampoline" it's only a matter of time before she can say the phrase "Kylie Cosmetics" and name the shades in her own collection.