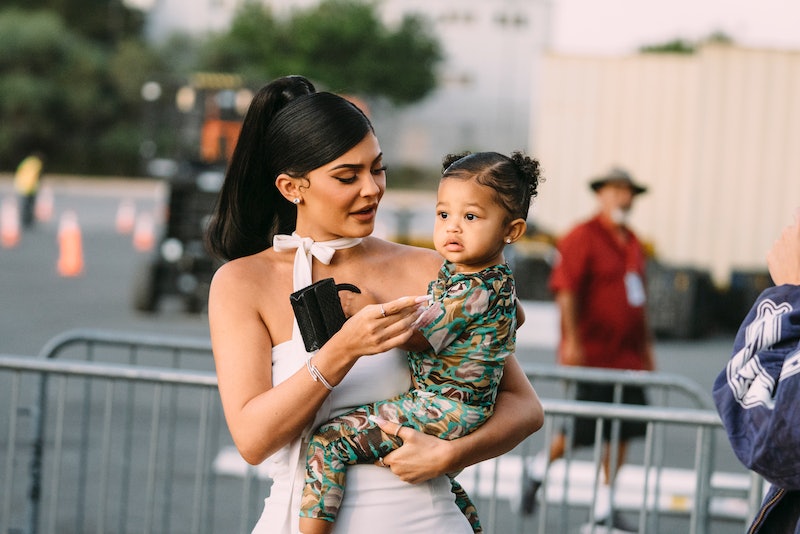 It goes without saying, but Stormi Webster is not your average 1-year-old. Case and point: The evening of Tuesday, Aug. 27. While most babies her age were probably taking a pre-bed bath or settling down for story time, Stormi joined Kylie Jenner and Travis Scott at her dad's Netflix documentary premiere, as reported by E! News. Like, this child legit just made her red carpet debut before some kids can even walk. How wild is that? She is truly a tiny rager.

So, in case you hadn't heard, Scott has a new documentary out now called Travis Scott: Look Mom I Can Fly. According to a press release about the film, it's got footage from his live shows, old home movies, and "follows Travis' life-changing moments, including becoming a father, performing at the Super Bowl and re-creating Astroworld for his hometown and fans."

Seeing as how Stormi is seemingly one of the stars of the documentary, it makes sense that Scott and Jenner would bring her along for the premiere. Even if it did mean keeping her up past her bedtime.

In the photos from the event, Stormi looked impossibly adorable, per usual. She wore a head-to-toe camo get-up — which, by the way, could have definitely doubled as pajamas later — and strapped on some fresh, stark-white sneakers that coordinated perfectly with the two baby barrettes in her hair.

Stormi clung pretty tightly to her mom throughout the whole thing, and honestly, can you blame her? The red carpet for the premiere was held at the Barker Hangar in Santa Monica, California, which means she was surrounded by tons of blindingly-bright flashbulbs from photographers and at least one giant jet.

Considering the circumstances, Stormi appeared to handle all the commotion of the night really well. OK, she definitely looked a little shell-shocked in some of the pics, but she did manage to smile joyfully for the cameras a few times. So, maybe she just needed a minute to adjust? At this point, though, Stormi must be at least kind of used to the fanfare that surrounds her famous family.

As for Jenner and Scott, they too, were impossibly adorable. The couple legit could not keep their hands off each other while walking the red carpet, which makes it seem like they're more in love than ever. They hugged, they kissed, they held hands — they basically acted like they were the only people there, and it was very, very sweet.

In addition to Jenner and Stormi, several of Scott's famous friends also attended the event to show their support. According to TMZ, both Offset and Quavo from Migos were there, as was Swae Lee from Rae Sremmurd.

If you're still itching for more cute Stormi, Jenner, and Scott content, then you're in luck. Travis Scott: Look Mom I Can Fly was released on Netflix on Wednesday, Aug. 28, which means that a sneak peek of their sweet little family is right at your fingertips as we speak. So, what are you waiting for? Go forth and "ooh" and "aww."