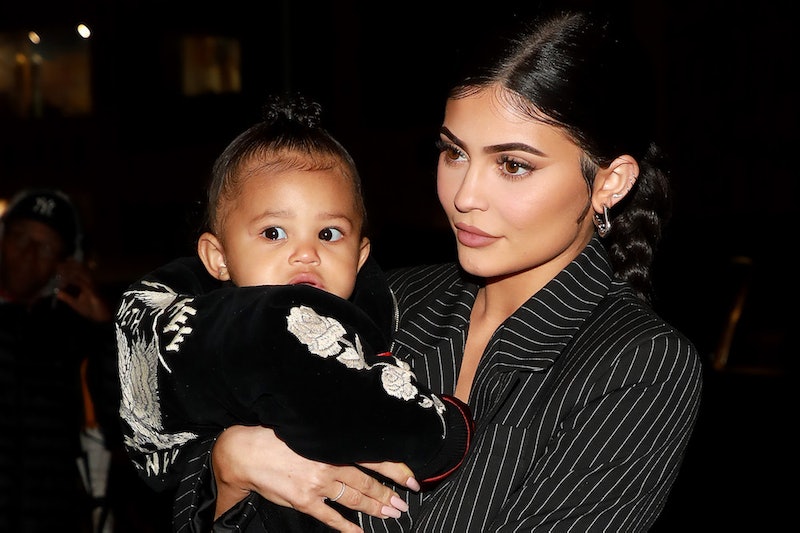 Stormi Webster has her mother’s musical prowess. Stormi covered Kylie Jenner’s “Rise and Shine” song — and it’s all memorialized on video. Jenner documented the musical homage in an Instagram post on Saturday that featured the young tot with a miniature pink microphone. The famous offspring of Jenner and rapper Travis Scott at first started with a series of soundchecks with various “Hellos?” and “Ellos?” before she dove right into the viral lyrics.

“Sing something,” Jenner said in the video. “Say, ‘Rise and shine.’” Stormi, donned in a blush hoodie, tiny white earrings, and a pink hair bow, happily obliged and crooned, “Rise and shine.” Her cover captivated Instagram audiences: Stormi’s grandma, Kris Jenner, wrote in the comments section, “OMG she is so adorable!!!” Model Winnie Harlow commented, “That’s it, I want a baby.” And Sofia Richie added, “Noooooo!!!!! I can’t handle it!”

Stormi’s cover comes after Jenner did a duet of the viral song with Justin Bieber at a charity event last December. On hand to raise funds for LIFT Los Angeles and Inner-City Arts with Bieber and his wife Hailey, the Keeping Up With the Kardashians star and the “Yummy” singer graced excited attendees with a rendition of the famed three-word song.

“Rise and Shine” became a viral sensation last October when Jenner uploaded an office tour of her beauty brand, Kylie Cosmetics HQ, on YouTube. In the tour that will now live on in infamy, Jenner enters a nursery to awake a sleeping Stormi and briefly sings, “Rise and shine.” As the moment reached viral meme status on the internet, Miley Cyrus, Lizzo, and Ariana Grande covered the song. The mania even prompted Jenner to release “Rise and Shine” merch.

This isn’t the first time Jenner’s daughter has made waves on social media. All eyes were on the tot earlier this month when Jenner threw Stormi an extravagant 2nd birthday party with the theme “Stormi World.” Inspired by her dad’s Astroworld album, Stormi World featured various themes including Frozen and Trolls. The party’s dramatic entrance of a massive Stormi head and mouth took the internet by storm. Chrissy Teigen and Jenner’s sister, Kim Kardashian, were a few of the celebrities to share photos of the extravaganza on social media.

Between her musical prowess and extravagant birthday bashes, Stormi Webster is truly "Rise and Shine" personified.