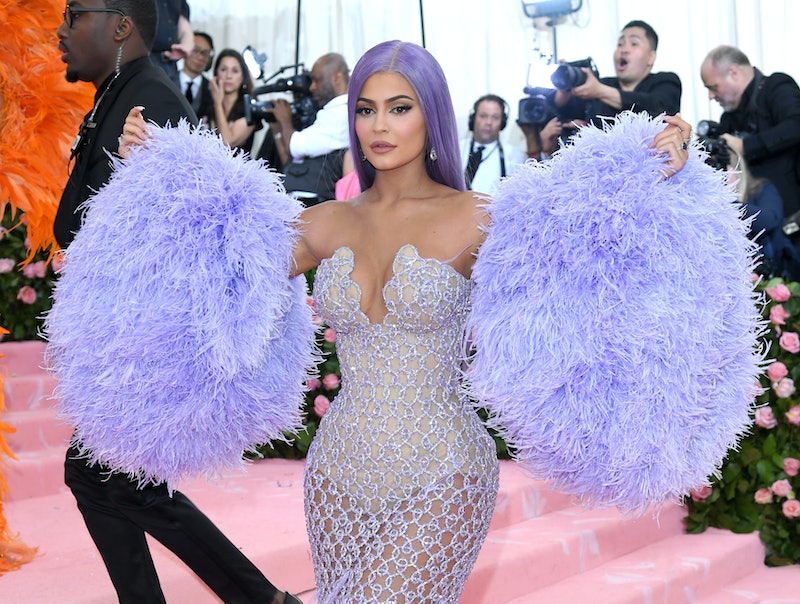 Love them, hate them, feel indifferent about them, the Kardashian-Jenners inspire feelings. Whatever those feelings are for you, though, this family's Halloween looks are always top notch. 2019 is no different, and this year, the kids are involved in a big way. Kylie Jenner and Stormi just twinned again within in the span of a week for the sake of Halloween, and this mommy-daughter duo might have just won the holiday.

On Halloween, Jenner uploaded photos from the kids' party she threw for the entire family. Video slides show everything from a ghostly bouncy house (which Khloe Kardashian and daughter True took part in) to a black, pumpkin-covered Halloween tree to an on-theme kids and adult tablescape. The party seems to have even resulted in someone tagging Jenner on Instagram exclaiming that "Auntie Ky" has the best kids parties.

While the event was major (no matter how old you are), Jenner and Stormi's second twinning moment was the cutest part of the night. Jenner chose to dress both she and her daughter up in matching superhero costumes. The Kylie Cosmetics owner's suit was pink (obviously, it's her signature) with a flowing cape in the same color and emblazoned with a "K" on the front. Meanwhile, Stormi's Halloween costume was the same design in purple with an "S" on the chest.

In still photos and video slides, Stormi and Jenner visit the bouncy house, take photos in a pumpkin patch (yes, Jenner had one brought in), and do arts and crafts together at a table. It's all just as adorable as it sounds. Doing it in matching outfits didn't hurt.

Stormi's purple superhero costume isn't the first time she's matched her mother this Halloween. Earlier this week, the toddler made the entire internet smile when she was dressed in a replica of her mother's 2019 Met Gala look.

Stormi's first costume featured everything Jenner wore to the gala including her feather sleeves, Versace dress, and purple wig. While Stormi and Jenner have twinned before, this may have been their best moment yet.

Jenner, however, isn't alone in coordinating she and her daughter's Halloween costumes. Nearly all of the Kardashian-Jenners did the same. Kim Kardashian West and her family looked amazing as the Flintstones while Khloe Kardashian and True were an incredible Cruella de Vil and Dalmatian. Even Kendall Jenner got in on the action in her own way by having staff at her Halloween party dress as herself at the 2019 Met Gala.

Say what you want about the Kardashians and Jenners, but this family certain knows how to do Halloween.

More like this
Kylie Jenner's Giant Lion Head Outfit Has A Deeper Meaning
By El Hunt
Kylie Jenner Rocked A Very Kim Kardashian-Esque Outfit At Couture Week
By Allie Fasanella
Kylie Jenner Joins The Bondage Trend In At Paris Fashion Week
By El Hunt
Kylie Jenner Wore A Flashy, Cinderella-Esque Look At Paris Couture Week
By Allie Fasanella
Get Even More From Bustle — Sign Up For The Newsletter
From hair trends to relationship advice, our daily newsletter has everything you need to sound like a person who’s on TikTok, even if you aren’t.