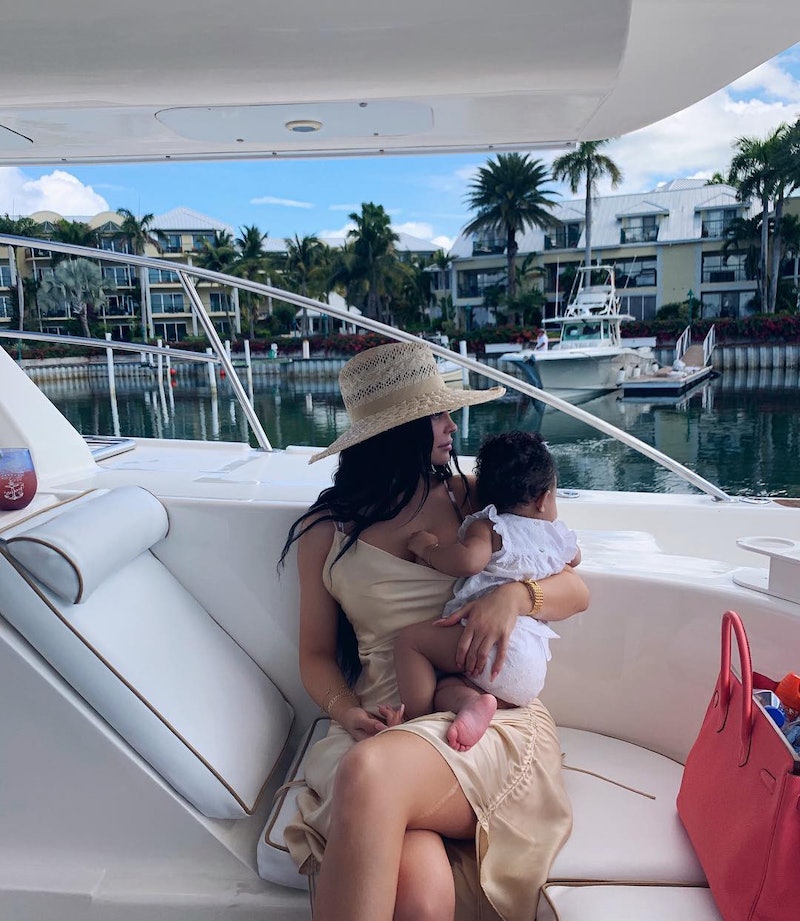 Whatever your feelings about the Kardashian-Jenner family, you may find it hard to deny that they love their kids. Apparently, Kylie Jenner partially shows her love by giving baby Stormi a hot pink Birkin bag. In her latest Instagram posts, Jenner and partner Travis Scott's baby girl can be seen clutching a tiny Birkin that could probably pay for your college education or snag you a really nice car.

On April 1, Jenner took to her Instagram account to post an adorable video of Stormi's dad, Scott, helping the baby girl walk down some stairs. According to Jenner's caption, though, it's not Scott that Stormi wouldn't let go of but the bag, and tbh, who would let go of a Birkin?

In another post, just before the video, the 1-year-old is pictured with the bag slung over her shoulder. While sure, an actual baby having a Birkin bag seems a little over-the-top, this is the Kardashian-Jenner family, and Stormi does look super cute with her mini purse.

Fans of Jenner's may not be so surprised that Stormi is carrying the bag though. As it turns out, Jenner told the world that it'd be her daughter's first purse back in Aug. 2018. In a tour of her bags on her YouTube channel from last year, Jenner showcased a tiny, bright pink Birkin that was gifted to her by elder sister Kourtney Kardashian. In the video, she explained it'd be Stormi's first bag when she was ready for one. Clearly, she was serious.

Stormi's Birkin bag may be worth more than your car, but Jenner's daughter and her bag are about to be become too adorable for you to care. In a post from Jenner on March 22, she and Stormi can be seen cuddling on what certainly seems like a yacht (what a life, right?). While the photo is sweet, the bag next to Jenner is what's notable given her daughter's Birkin. Why? Because Jenner seems to have one that matches her daughter's. Mom and daughter Birkin bags? Yes, please.

Stormi's Birkin, however, isn't her only piece of extravagant fashion. Some of her pieces even come courtesy of her aunts. For Christmas, Jenner's sister Kim Kardashian gifted all of the baby girls in the family $1,000 Louis Vuitton bags. At the time, Stormi wasn't even one year old yet, but she and her girl cousins were all rocking Louis Vuittons for Christmas.

Purses aren't the only pricey gifts that Stormi has received, though. In fact, the second youngest member of the next generation of Kar-Jenners has nothing less than diamonds. According to Cosmopolitan, Stormi's dad gifted his daughter her very own diamond chain complete with her name and a lightning bolt. In the video posted to Instagram back in February, Jenner zooms in on the necklace says, "Look what your daddy got you." Not a bad present, right?

While Stormi's baby Birkin bag may seem like an extravagant first purse for a 1-year-old, she is a member of the Kardashian-Jenner family. What else would you expect? Plus, regardless of how you feel about the family, it's hard to deny just how adorable Stormi looks with her hot pink Birkin.