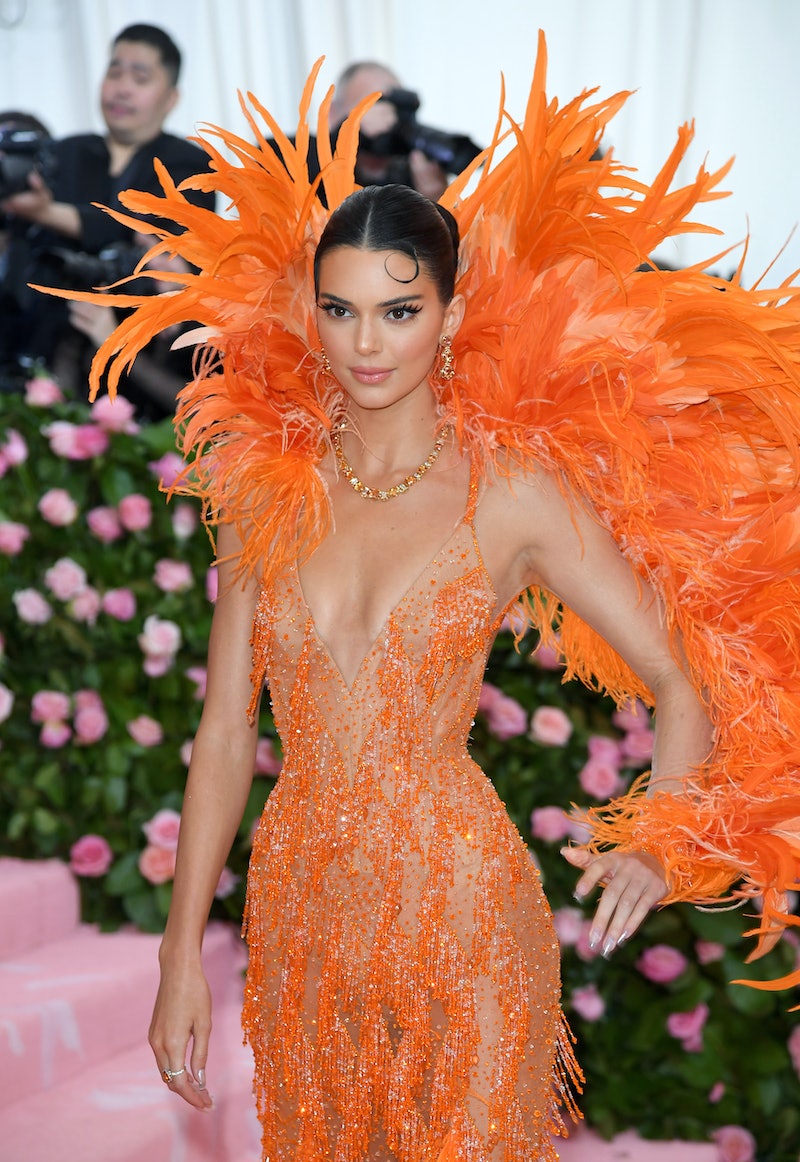 Most of the members of the Kardashian and Jenner family have kids. When it comes to Halloween, this means they get to create mini versions of themselves. Just look at Kylie Jenner and Stormi. Kendall Jenner, however, doesn't have a kiddo, so she did the next best thing and had six Met Gala look-a-likes at her Halloween birthday party. Yes, it was as epic as it sounds.

In video slides uploaded to Jenner's Instagram stories, six copy cat Kendall Jenners from the 2019 Met Gala were all at her Halloween party. According to Cosmopolitan, the Jenner-a-likes are actually part of the staff who were working the event. The costumes they were tasked with wearing are spot-on.

All six women have dark hair pulled slickly back into a tight bun with a single curl against their forehead and Jenner's precise, black eyeliner makeup look. The most impressive part, though, is how accurate their dresses are. Just like Jenner's Versace dress, the women wore full length, orange sequin dresses with a massive amount of feathers starting at one shoulder and extending all the way down their arms.

The look-a-like moment was clearly an epic moment, but the biggest question about the looks has to be whether or not feathers got in the food?

The Halloween moment is reminiscent of another celebrity who always goes full out for the holiday: Heidi Klum. While the model has had a bevy of next-level costumes, her 2016 idea may be where Jenner got her own inspiration for clones.

For her annual Halloween party that year, Klum doubled herself or um, quintupled herself? The model brought five women — who already resembled her — to the party and dressed them identically to her own look as well as had them wear similar makeup. The result was six Heidi Klums a la Kendall Jenner's six Met Gala look-a-likes.

Jenner could also have been inspired by her own sisters. You've likely already heard, but Kylie Jenner dressed daughter Stormi Webster up as a mini version of herself at the same Met Gala. The result was adorable.

Perhaps, it was a Kim Kardashian West inspired move, though. In March, Kardashian West announced her collaboration with sunglass brand Carolina Lemke. For the ad campaign, the KKW Beauty owner had doubles of herself modeling the sunnies. Plus, she even sent out molds of her face in the PR boxes.

Regardless of where Kendall Jenner got her look-a-like idea from, the costumes were definitely an epic Halloween moment.

More like this
Kendall Jenner Just Rocked A Sheer Dress & A ‘90s Rosette
By Allie Fasanella
Kylie Jenner Rocked A Very Kim Kardashian-Esque Outfit At Couture Week
By Allie Fasanella
The Biggest Fashion Moments Of Paris Couture Week 2023
By Dominique Norman
10 Times Haley Lu Richardson Dressed Just Like Portia
By Dominique Norman
Get Even More From Bustle — Sign Up For The Newsletter
From hair trends to relationship advice, our daily newsletter has everything you need to sound like a person who’s on TikTok, even if you aren’t.