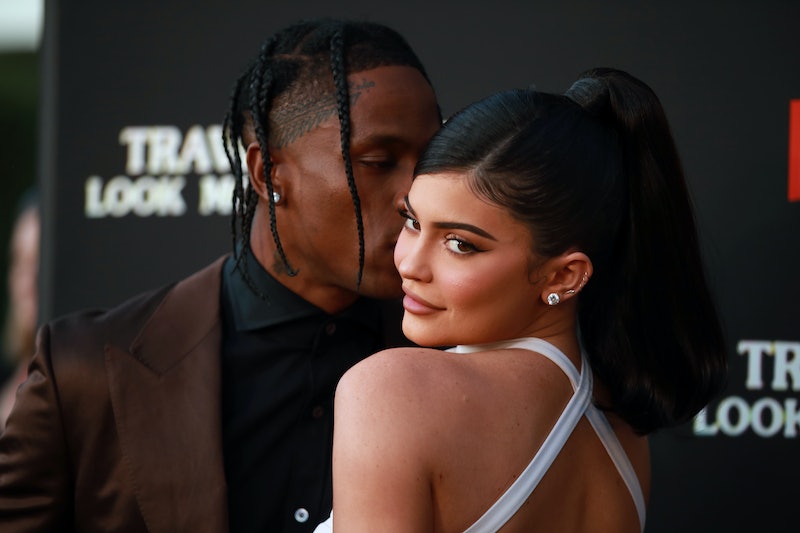 It looks like there won't be any wedding bells ringing for the Kardashian-Jenner family in the new year, after all. Shortly after the Kylie Cosmetics founder was spotted showing off a new ring on social media, Kim Kardashian denied that Kylie Jenner and Travis Scott were engaged during an appearance on The Ellen DeGeneres Show. The reality star was asked to clear up several rumors about her famous family by host Ellen DeGeneres, but even Kardashian admitted that she was a little confused by her baby sister's relationship status.

"Definitely, [Jenner and Scott] are not engaged," Kardashian said, explaining that the "big ring" that Jenner was showcasing on her Instagram Story on Dec. 13 was "on a different finger." Jenner wore the large, pear-shaped diamond on her index finger in the video, which she posted from her car over the weekend. "I think she bought that herself because she was showing us," Kardashian added.

However, while Kardashian was confident that Jenner and the rapper were not engaged, she did admit that she wasn't sure whether the pair had rekindled their romance after their October breakup. "I honestly don’t know [if they're together], but I think that they are just really close friends and co-parenting amazingly," the KKW Beauty founder told DeGeneres. "I don’t know the status if they’re together or not. I don’t think they are."

Jenner and Scott first met at Coachella in April of 2017, and after a whirlwind romance, welcomed their daughter, Stormi, in February of 2018. On Oct. 1, 2019, TMZ reported that the pair had called it quits, though a source told People at the time that they were just "taking a break" and would likely get back together. "They still have some trust issues but their problems have stemmed more from the stress of their lifestyles," the source added.

Shortly afterward, both Jenner and Scott refuted rumors that they had broken up due to infidelity, with the rapper writing on his Instagram Story that the "stories about me cheating are just simply not true." He also added that it was "really affecting when u see false things said about u" online. Jenner, meanwhile, wrote on Twitter that their split was amicable, and that their focus was on being supportive co-parents to their daughter. "Travis and i are on great terms and our main focus right now is Stormi," she wrote. "Our friendship and our daughter is priority."

Despite all of the emphasis on their good relationship, in late October, Us Weekly reported that the pair weren't planning to get back together, with a source telling the outlet that "they have differing objectives and two different lives." Jenner was briefly linked to Drake in November, but rumors of a possible reconciliation with Scott surfaced yet again when she was spotted attending the rapper's Astroworld Festival later that month. A source told People at the time that the pair were even planning to spend the holidays together and celebrate as a family with Stormi.

"Travis was always free to come and go at Kylie’s so he can see Stormi,” the source said at the time. "Now when he isn’t working, his free time is all about Stormi." The source later added that "as special holidays are coming up, they will continue to spend a lot of time together. They both seem great together. There is definitely hope things will work out."

Whatever is in Jenner and Scott's future together, it's not a walk down the aisle. At least, not yet.

More like this
'Bachelorette' Vet Clare Crawley Revealed Her Stunning Wedding Photos
By Stephanie Topacio Long
RHOP’s Robyn Dixon Explained Why Juan Paid For Another Woman's Hotel Room
By Brad Witter
'Love Island' Has Added Yet Another Bombshell To The Villa
By Bustle UK
Molly-Mae & Tommy Fury Revealed Their Baby Girl's "Really Unusual" Name
By Sophie McEvoy and Sam Ramsden
Get Even More From Bustle — Sign Up For The Newsletter
From hair trends to relationship advice, our daily newsletter has everything you need to sound like a person who’s on TikTok, even if you aren’t.