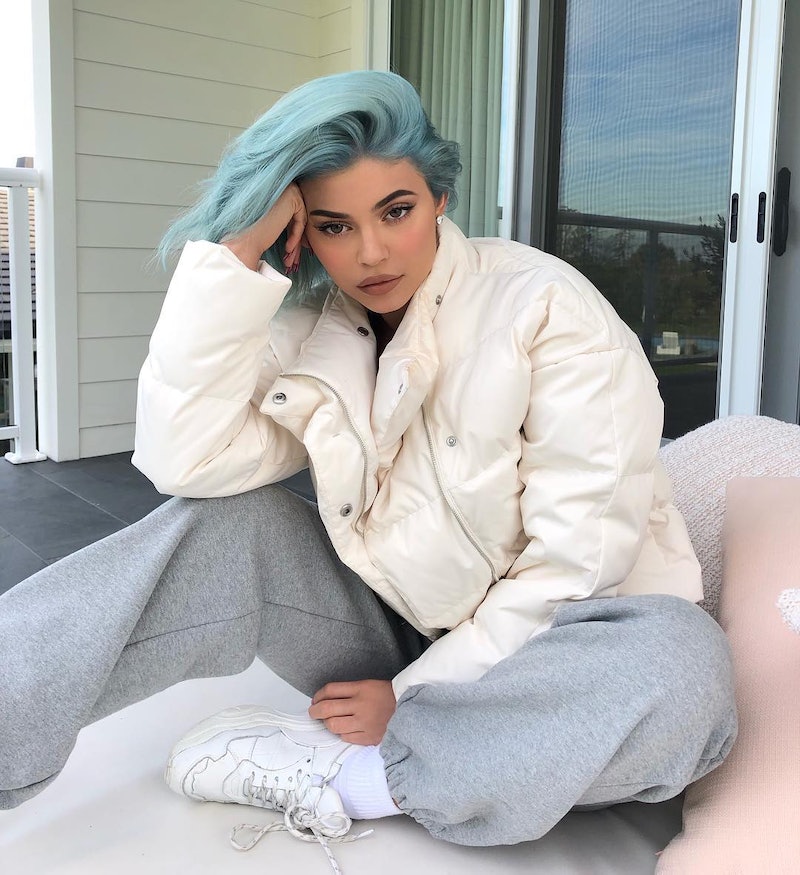 When it comes to switching up hair colors and styles no celebrities may be more adventurous than the Kardashians and Jenners. Now, though, Kylie Jenner's black hair is back after a trip into a blue 'do, but don't worry. Fans of the Kylie Cosmetics creator know that the young mogul loves a good hair change. Whether it's a wig or an actual color, there's no telling what could come next from Jenner.

In case you missed it, for the past few weeks Kylie Jenner has had blue hair. The look was very Jenner circa 2014 in the best way possible, but that look was soon switched out for the platinum blonde that she's been wearing for quite some time now. Cut to Sunday, though, and fans got an Instagram photo of the youngest member of the Kardashian and Jenner clans rocking black hair. In fact, Jenner herself even seemed to acknowledge the change adding a dark haired emoji and a black heart to her caption.

Simply because Jenner has gone back to her naturally dark hair, though, doesn't mean it will last for long. In fact, there could be a chance that the dark hair is a wig. It wouldn't be the first time that she's bamboozled fans with her hair.

After all, Jenner has been platinum blonde, pink, and blue recently. It's not a secret that going from a dark color like her natural hue to such light shades takes quite a long time if done in a healthy way. Would Jenner color her hair dark and risk having to go back through that process again? Honestly, there's no real way to know, but Jenner's wig game is so strong that this new black mane could just be one.

Jenner has actually been blonde for months now, but if you look closely at her Instagram, there are moments where she seemed to switch back to her dark hair. During Halloween, Jenner adorably dressed she and daughter Stormi as matching pink butterflies, and her hair seemed to be cut into a short dark bob. Only a few days later, however, she was back to blonde and dressed as a Victoria's Secret angel with her sisters. The case for her butterfly look is pretty strong even if she never actually said so.

Of course, Jenner has actually admitted to fans when she's worn wigs in the past, especially when the supposed transformation got loads of attention. Back in 2016, Jenner posted a Snapchat video of herself getting what looked to be her hair cut into an ultra blunt, short bob. As it turns out, the transformation was just a wig being cut, and she was back to longer locks the following day.

Clearly, Jenner likes to switch her look, and in fact, it's something she's known for. While it seems as though her platinum and blue days may be over, don't be so sure. Kylie Jenner's hair changes have a way of sneaking up on fans, and they're always SO good.

More like this
Jennifer Lopez's ‘90s Updo Hairstyle Takes Me Back To Middle School
By Olivia Rose Ferreiro
The 9 Most Head-Turning U.S. Open 2022 Beauty Looks
By Rachel Lapidos
This Week’s New Makeup Releases & More Beauty Headlines
By Audrey Noble and Erin Stovall
12 Stunning Beauty Moments From London Fashion Week S/S 2023
By Olivia Rose Ferreiro
Get Even More From Bustle — Sign Up For The Newsletter