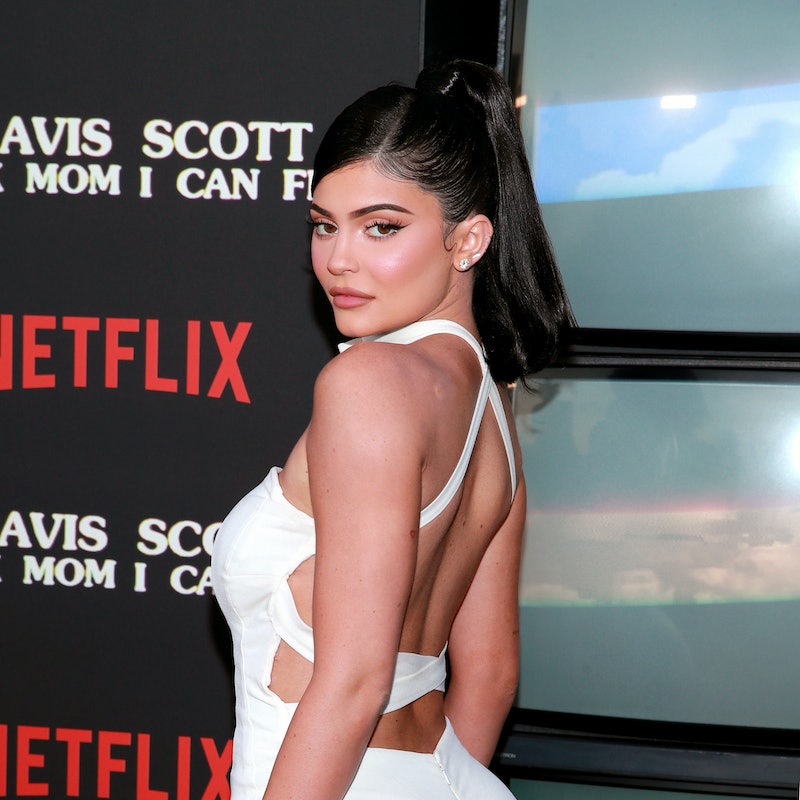 Just in case you haven't heard, Justin Bieber and Hailey Baldwin got married — again. The star-studded guest list had some familiar names on it including the youngest member of the Kardashian-Jenner family. In fact, Kylie Jenner's dress for the Bieber wedding may have just about stolen the show.

Bieber and Baldwin married last year in a small ceremony, but on Sept. 30, the pair renewed their vows in a major wedding celebration in Bluffton, South Carolina. While Hailey Baldwin's wedding looks were the sartorial stars of the big weekend, Kylie Jenner's gold tin foil dress was also a show-stopper. Okay, so Jenner's dress wasn't actually made of golden foil, but the gown certainly looked like it could have been — in a chic way, of course.

On Oct. 1, the day after the Bieber wedding, Jenner took to her Instagram to post a photo of her outfit for the event. Based on the Kylie Cosmetics owner's look, the nuptials were likely a black-tie affair, and she went for it. The golden gown appears to be made from a stiff crépe that gave it the crinkled — somewhat tin foil-esque —appearance. A single, twisted strap covered one shoulder and unfurled to reveal a cut-out at the bust while an upper-thigh high split made the dress flow behind the reality star.

This is the most glam tin foil dress you'll ever see.

Jenner paired the gown with strappy, golden sandals, earrings of the same color, and a butterfly bag that could have been an homage to her daughter Stormi. The Kylie Skin owner frequently wears butterflies for her daughter and even dressed she and the toddler in matching butterfly costumes last Halloween.

As for her hair, Jenner and the bride were twinning for the night. Call it the Meghan Markle effect if you'd like. Both Jenner and Hailey Baldwin seemed to take a style from the Duchess of Sussex's book and pulled their hair back into center-parted messy buns with pieces of hair framing their faces. Plus, Baldwin's reception gown even looked similar to Markle's Stella McCartney gown.

Jenner wasn't the only famous face in attendance at the wedding who wore a show-stopping outfit. The beauty mogul was joined by her sister Kendall Jenner at the celebration, and she also chose to wear gold.

The model rocked a fitted '90s-esque column dress in an olive-y gold velvet that featured spaghetti straps and mesh along the scoop neckline. To complete the '90s vibes she was serving, Jenner even crimped her dark hair for the evening.

Other well-dress attendees included model Joan Smalls who, according to her Instagram posts and stories, seemed to don a black jumpsuit with side-baring cutouts. Meanwhile, singer Justine Skye chose a floor-length, eggplant-hued gown with a one-shoulder design that draped over her arm.

While Hailey Baldwin's wedding looks were the star of the weekend — she was the bride, after all — guests at the Bieber affair attended in their wedding finest, even if it did kind of look like tin foil.