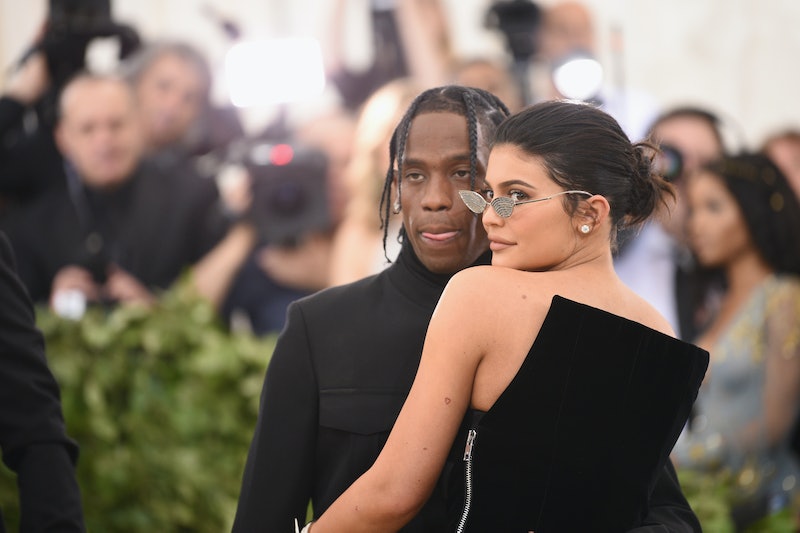 Like mother (and father), like daughter. On Jan. 30, Kylie Jenner posted a new clip to her Instagram Story, People reported. And according to the video, baby Stormi now loves butterflies just like Jenner and Travis Scott. Get ready to "oooh" and "aww," because the whole thing is pretty darn adorable.

Jenner and Scott's affinity for butterflies can be traced all the way back to the beginning of their relationship. The delicate, winged creatures have been a constant symbol in their lives ever since then, and now Stormi is showing signs of loving them too.

In the cute clip Jenner posted on Wednesday, Stormi reaches for some decorative, multi-colored butterflies hanging from the branches of a tree inside her room. "She loves butterflys," Jenner captioned the video — and Stormi's precious little giggles prove that indeed, she does.

After Stormi gets one of the critters firmly in her grasp, she gives it a tug and Jenner gently warns, "Oh. Don't break it." Stormi clearly wants it off of the string it's attached to, though, and gives it another tug. Then, without warning, she immediately turns to her left and reaches for another set of butterflies — these tinted pale pink — pinned to the wall.

This time, the little girl gets exactly what she was going for. As the butterfly tumbles off its wall mount, Jenner exclaims, "Oh. Girl. You're dropping all of them. You're breaking them." She obviously doesn't mind the destruction all that much, though, as her tone remains cool, calm, collected and soft. See? Told you it was cute.

Back in June 2017, Jenner got an itty bitty butterfly tattooed on the back of her ankle. At the time, she and Scott were only rumored to be dating, but the fact that Scott had the same tattoo in the same place, as Glamour noted, totally seemed like some evidence that the rumors were probably true.

Their interest in butterflies didn't end there, though. Following the confirmation that Scott and Jenner were, in fact, a couple — but before the confirmation that they were expecting — Jenner posted a photo to Instagram showing her fingers adorned in sparkly butterfly-shaped rings. She was later seen wearing a butterfly necklace as well, which ultimately led fans to believe that that's what the couple had named their daughter.

Alas, that was not the case, and fans now know Jenner and Scott named their daughter Stormi. Even so, the couple has continued to prove that their love of the bug definitely wasn't fleeting. In October, for Stormi's first Halloween, Jenner and her daughter donned matching pink and black butterfly costumes. "my baby butterfly .." she captioned the photo on Instagram.

It's kind of funny that butterflies have become such a big part of Jenner and Scott's life, seeing as how Jenner admitted to being afraid of them during the first season of Life of Kylie. "Butterflies are just part of the secrets of Kylie," she said on the show. "It's kind of just ironic because I'm terrified of butterflies. All butterflies. This is how I think of them: cut the wings off, and if you just look at their bodies, they're not that pretty. It's literally a bug."

Regardless, her fear of butterflies clearly doesn't run *that* deep, as evidenced by their constant presence. As for Stormi, Jenner's recent videos prove that she doesn't fear them at all — and she may actually end up loving them even more than her parents.