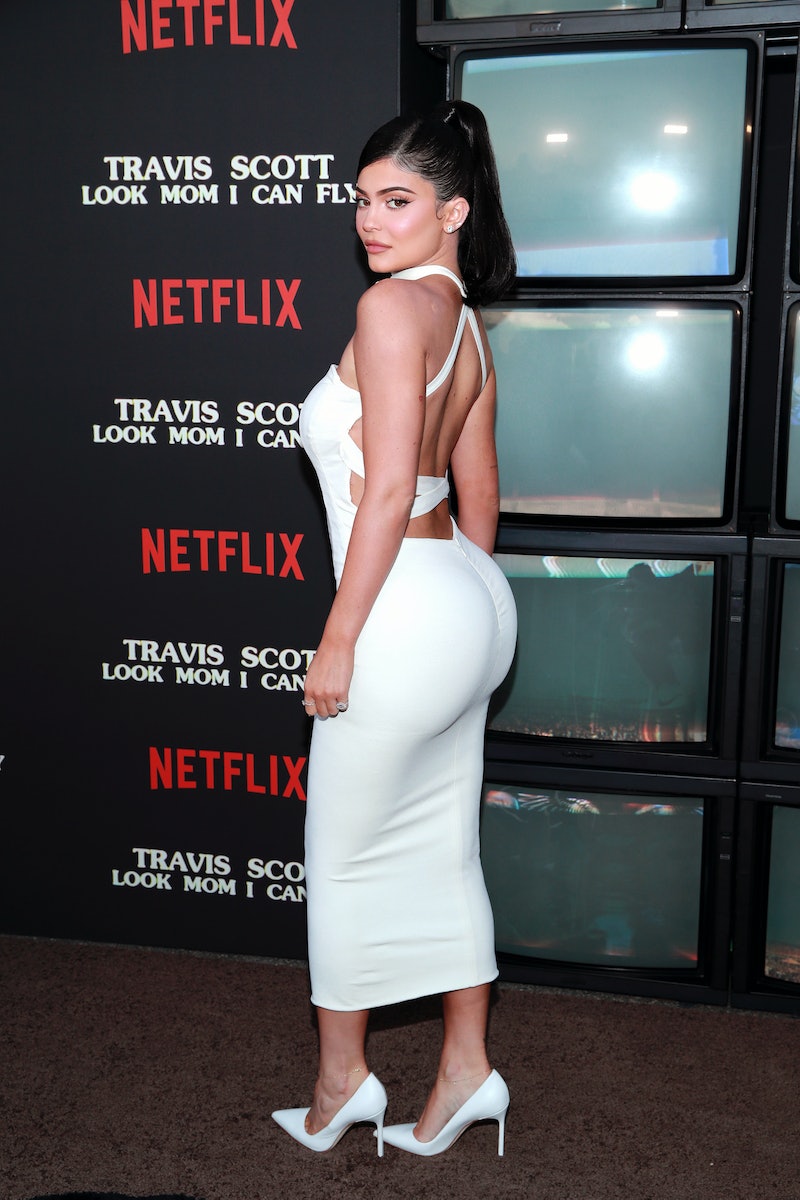 Kylie Jenner is ready for spooky season, at least according to her Instagram. The beauty mogul and reality star took to her social media to showcase just how pumped she is for October. No, she didn't release pumpkin spice-themed makeup. Instead, Kylie Jenner wore head-to-toe orange sequins turning herself into the sexiest pumpkin cosplayer you've ever seen.

On Oct. 3, Jenner posted a trio of photos of herself posing in pumpkin-colored sequins all the way from her neck to her wrists to her ankles. While the ensemble looks like a jumpsuit — of course, Jenner would make an orange jumpsuit chic — the pumpkin-inspired look is actually composed of separates from Danish brand Saks Potts. The top and pants are a stretch sequin lamé that blended together to form the pumpkin jumpsuit look.

If, like Jenner, October doesn't just mean witchy wears and sartorial spookiness but also some serious glamour (because what else do you gold orange lamé), you can actually shop the top and bottom she's wearing.

According to Style Caster, both the pants and top are available now via SSENSE, and together, the entire ensemble will cost you a cool $560.

Sure, some may balk at paying nearly $500 for separates that make you look like the most dazzling pumpkin ever, but these pieces are a steal compared to her equally as sparkly accessory.

In the images, Jenner has paired the orange separates with a $10,000-themed Judith Leiber Couture bag. Because every pumpkin needs a little green to match, right? Well, the Saks Potts price tag won't seem so daunting once you hear that Jenner's tiny clutch is currently available from Nordstrom at the low, low price of $5, 695. But hey, at least it's not actually $10,000, right?

The Kylie Skin creator tagged Leiber on her Instagram, but the iconic, crystal-covered look of the designer's clutch needs no identification. Jenner, alongside other members of the Kardashian clan, are known for being big fans of the accessories label.

In fact, just a few days ago, the Kylie Cosmetics owner gave fans a look at some of her favorite fall bags in her massive purse closet. One of them just so happened to be the $10,000 clutch in question. However, behind the dollar-bill bag, there are also two matching lipstick tube pieces also from Leiber's line that she'd just worn on her Instagram days before.

But Jenner isn't the only family member who's made their love for the designer known. In June, Kim Kardashian West made headlines for a Judith Leiber bag, one she gifted to young sister Khloe Kardashian in. Kardashian West surprised her sister with an sparkly eggplant clutch for her birthday, and yes, she was certainly in on the joke.

Even Kardashian-Jenner matriarch Kris Jenner is a major fan of the bags. In Aug. 2018, Jenner showcased her closet for the Judith Leiber Couture YouTube channel and showed off her own set of bags from the label.

Maybe we can't all have Judith Leiber bags or $500 separates that turn us into glittery pumpkin spice lattes, but spook season is here. You should still get into it just like Jenner.