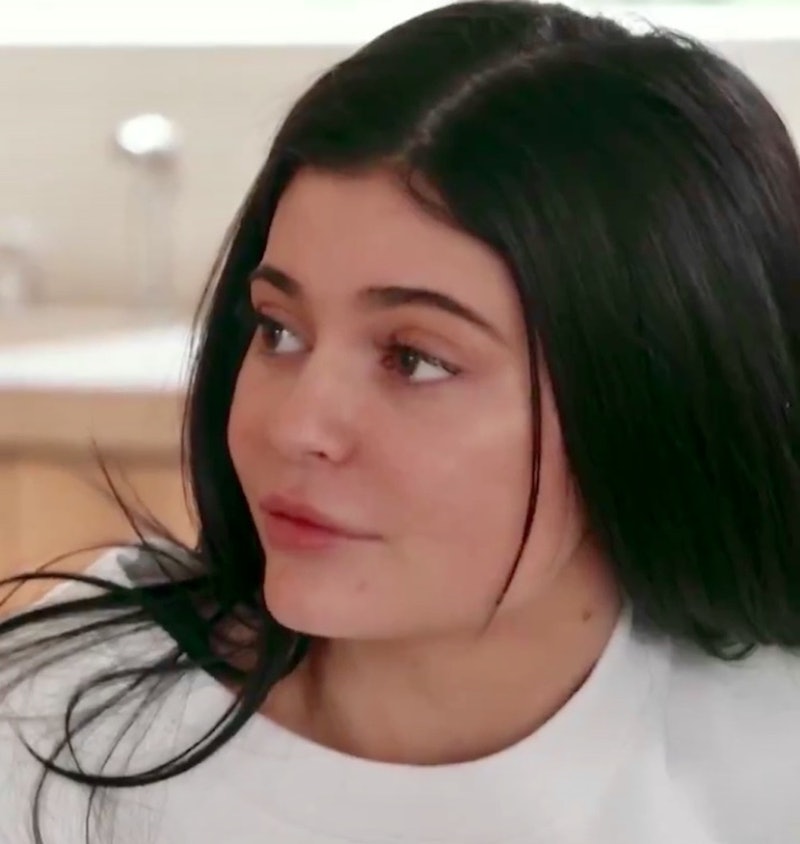 Jordyn Woods, Khloé Kardashian, and Tristan Thompson have all spoken, and now fans can finally see how Kylie Jenner responded to BFF Jordyn and Tristan's alleged cheating scandal, in E!'s newly-released Keeping Up With the Kardashians mid-season trailer. After Kris Jenner says in a voiceover, "This is going to change their relationship forever," the matriarch, then, tells her youngest daughter, "For you and Jordyn, it's like a divorce." Responds Kylie in a succinct manner, "She f*cked up."

Kylie, in the very next scene, supports a tearful Khloé, telling her big sis, "Just know, I love you." Later, Kim Kardashian is on the phone, and the voice on the other end, which E! identified as Kylie's emotionally says, "The look in her eyes, she's just really going through it."

While it's unclear whether Kylie's talking about Khloé or Jordyn, Kim's tearful reaction to the news, leads viewers to believe that it's most likely about Khloé. Anything is possible, however — as the scandal certainly rocked the entire family.

For those who need a quick recap, Khloe and Tristan split in February, following reports that the NBA player and Jordyn hooked up at a party. Shortly thereafter, Jordyn (who happens to be Kylie's longtime best friend) admitted on Jada Pinkett Smith's Red Table Talk, that she and Tristan did kiss at the bash but denied that their interaction went any further than that.

The KUWTK preview provides some more details on what happened between Jordyn and Tristan, however. While viewers don't get to see who's speaking, E! notes that "a voice that appears to be Kim Kardashian's BFF Larsa Pippen" is heard saying cryptically, "I don't even know if I should tell you this." Adds another unidentified speaker in the clip, "Her legs were like in between his legs."

What's undeniable, based on E!'s sneak peek, is that the painful revelation was devastating for Khloé. "I'm broken by so many things," the heartbroken Good American founder, who shares 13-month-old daughter True Thompson with Tristan, says in the video, as she's seen wiping tears from her eyes.

Kim predicts that "one day she's just gonna explode," and it seems she knows her sister well. Not long after that statement, cue Khloé banging on a table and screaming at a propped-up phone, "Liar!"

As Khloé adds — while crying — during a taped confessional in the preview, "I'm not just a TV show, like this is my life."

While that's all that fans see of the Khloé-Tristan-Jordyn scandal in the clip for KUWTK (which E! airs on Sundays at 9 p.m), they can expect plenty more family drama in the second half of Season 16.

"I don't understand how my own sister is talking sh*t about me," Kendall Jenner says before the video cuts to Kourtney Kardashian seemingly defending herself: "I didn't even know there was a problem."

An incensed Kendall is also seen shouting, "She will go out of her way to make me look crazy." Yikes.

Don't worry, KUWTK viewers, there will be plenty of laughs and lighthearted moments, too. Among them: a camping trip during which Kim seems to struggle with both assembling a tent and starting a campfire; a dancing Kanye West; and Khloé, Kourtney, and Scott Disick making silly faces in mirrors.

When it comes to the Kardahian-Jenners, they certainly don't leave fans in the dark — and remain open to inviting them to share in both the good times and the bad.