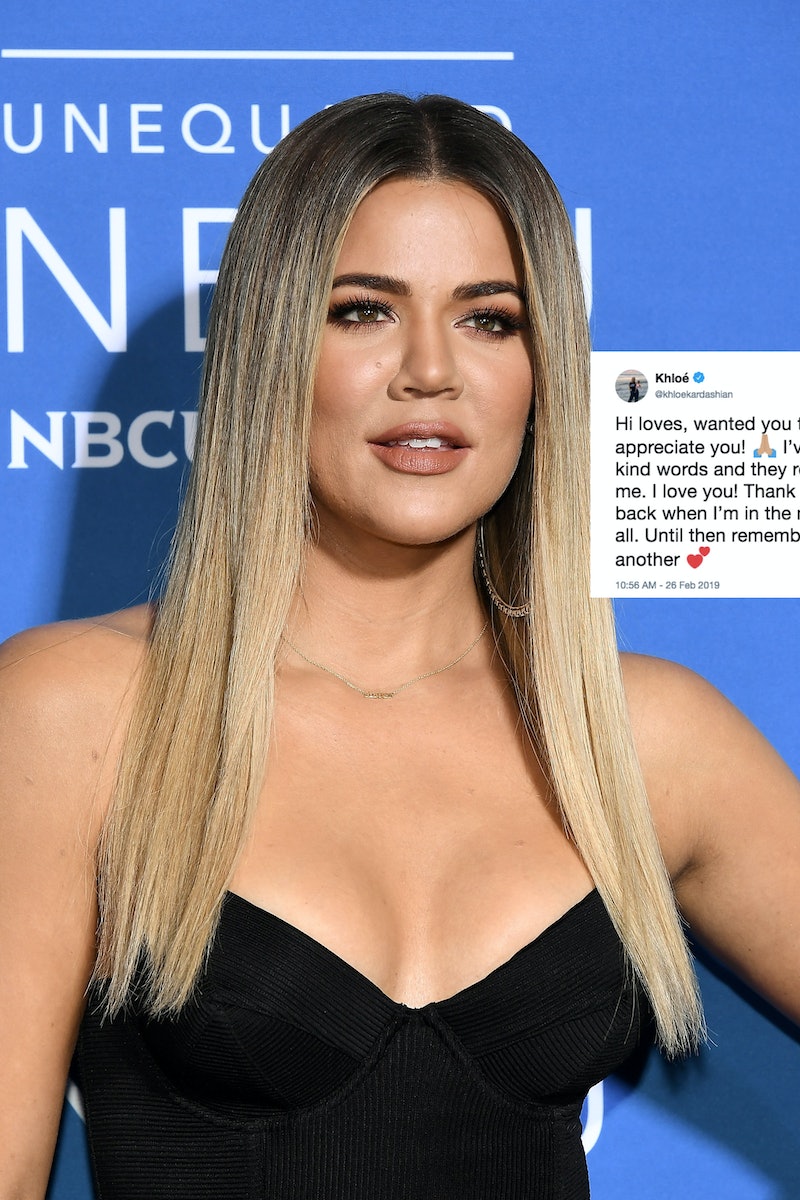 It's been an eventful week for the Kardashian-Jenner family, to say the least. And after a few cryptic Instagram Story posts hinting at heartbreak, Khloé Kardashian broke her silence after her split from Tristan Thompson by posting a tweet to thank fans for all their support at this time.

"Hi loves, wanted you to know that I appreciate you! I’ve been reading your kind words and they really are a blessing to me. I love you! Thank you Thank you! I’ll be back when I’m in the mood to chat with you all. Until then remember to be kind to one another"

The reality star's message makes clear she's not actually ready to explain too much right now (hence the "I'll be back when I'm in the mood to chat with you all"), but she wanted to let fans know she appreciates all the love they've been sending her way. And that in itself is pretty sweet.

In case you missed it, last week, news broke that Khloé and Thompson officially split, as confirmed by E! News and Us Weekly. This update came the same day that publications, like Hollywood Unlocked and TMZ, claimed that Thompson reportedly cheated on Khloé with Kylie Jenner's BFF, Jordyn Woods. According to E! News, the NBA player initially shot down the rumor in a tweet that said, "FAKE NEWS," but the message has since been deleted. (Bustle previously reached out to reps for Khloé, Woods, and Thompson, but did not hear back.)

While Khloé's new tweet is much more direct, her previous responses to the situation were a little on the vague side. When Hollywood Unlocked posted a video to Instagram about the cheating claim last Tuesday, Khloé posted a bunch of screaming emojis in the comments section. Meanwhile, her best friend Malika Haqq wrote, "STRONG FACTS."

And last Thursday, Khloé posted a series of quotes to her Instagram Story that were pretty devastating. One post read, "the worst pain is gettin hurt by a person you explained your pain to," while another said, "If they ask you about me, tell them: 'She was the only person that loved me with honesty, and I broke her.'" She also posted, "Somebody needs to hear this...That betrayal was your blessing!!!"

Considering the situation at hand, these statements appeared to be a direct reference to Khloé finding out about the cheating rumors. Making the situation even sadder, this wasn't the first time she's dealt with infidelity claims in the public eye. Last April, reports spread that Thompson cheated on Khloé while she was pregnant with their daughter True Thompson. (The basketball player has never publicly addressed the scandal, but Khloé has spoken out on Twitter, including live-tweeting the Keeping Up With The Kardashian episode about the situation.)

After that, the pair appeared to reconcile and tried to make their relationship work for the sake of their daughter, according to reports last December. It's unclear now whether they're done for good, but based on how much these two put their daughter True first, it's safe to assume they'll remain in each other's lives in some capacity.

While Khloé's recent post hints that she's still processing the whole ordeal, she's got major support from fans and her famous family along the way. Kim Kardashian has had her back on Twitter more than once — shutting down Bachelorette casting rumors and defending her sister after someone tried to criticize Khloé for going to a work event amid all the drama. Kim wrote,

"Would you prefer she lose the [money bag] too? A single mom has to work too boo! This was a professional commitment planned far in advance and you better believe she is not waiting on anyone to pay her bills or provide for her daughter. PERDIODT!!!"

Kim also unfollowed Woods and Thompson on Instagram last week, which may not sound like much — but considering how seriously she takes social media, fans took the move as a pretty big deal.

Of course, Khloé should take all the time she needs to work through everything and only speak out when she's ready, but it's at least nice to see she's checking in with fans, all while reminding them to "be kind to one another" in the meantime.