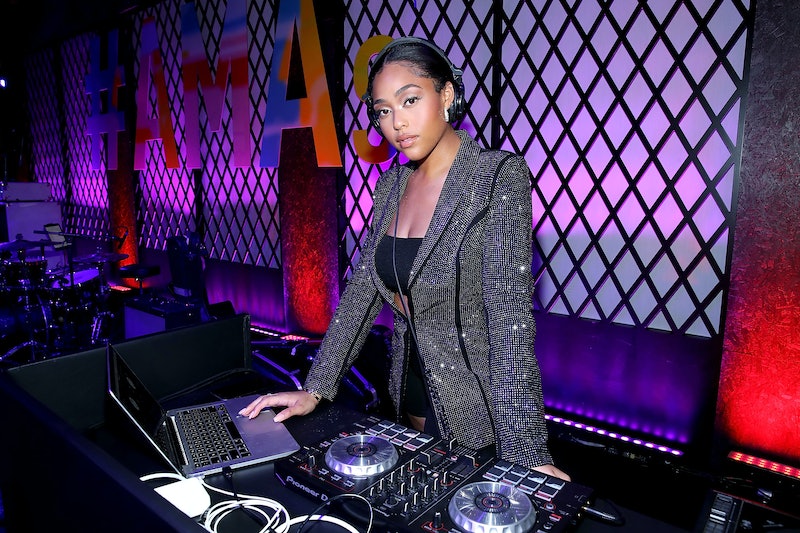 A little over a week after reports broke that Jordyn Woods and Tristan Thompson were allegedly in some kind of relationship, Jordyn Woods' episode of Red Table Talk has arrived, and the model is ready to lay everything out on the table, including how she felt as a black woman being the center of a pop culture scandal.

In the 30-minute interview, Woods addressed the Thompson cheating rumors during her conversation with host and family friend Jada Pinkett Smith, offering up her perspective on the events surrounding reports that Thompson cheated on Khloé Kardashian with her during a party at his house.

Woods then addressed how quickly the media was to assume or report that she, a black woman, was at fault. Reflecting on the way that black women are treated by the public, especially when they're in the middle of a scandal, Woods said, "This story that didn't have to be what it was turned into the biggest scandal or betrayal of the year." Woods continued as Pinkett Smith nodded along, "I've seen what has been done to my life in only a week based on the way the media circulates. ... They're putting their focus on a young black woman who has made a mistake, and not a mistake that's worth public crucifixion."

Earlier in the interview, Woods denied that she hooked up with the NBA star, though she did admit to attending a party at his house, where she claimed that he kissed her goodnight. "On the way out, he did kiss me," Woods said, according to People, adding that there was "no passion, no nothing … he just kissed me." Publications like Hollywood Unlocked and TMZ had previously stated that Woods and Thompson reportedly hooked up at a party on Feb. 17. (Bustle reached out to reps for Kardashian, Thompson, and Woods for comment on the reports, but did not hear back.)

During the conversation, Woods confessed that she regrets the way that both her family and the Kardashian-Jenner family have had to deal with the fallout from the cheating reports so publicly. "It's a mistake that should have been dealt with internally," Woods said, referring to her part in the scandal.

"Well, you know what they say: Black women can be the most disregarded and disrespected creatures on Earth," Pinkett Smith said, before commiserating with Woods about the vitriol that she has received since the the cheating rumors broke. "Being a black woman in the game for as long as I've been ... without people even having heard your side, without being given the benefit of the doubt, it just always seems like it's so easy to target black women and put everything on us, even when there's other people involved."

In response, Woods confessed, "I saw [the way black women are treated], but I never felt it," until now.

The model also opened up about how difficult it has been to be at the center of such a painful and public scandal, admitting, "every day it was a new headline, every time you refreshed the page it's another person bullying me, or wishing death upon me, or telling me something like, 'Your father deserved to die.' I may have done something wrong, but no matter what I did, I don't think I deserve this." (Woods' father died in 2017 just two weeks after he was diagnosed with cancer.)

Unfortunately, Woods isn't the only person who has had to deal with the fallout from the rumors about her and Thompson. "Everyone's safety is now [at risk]," she revealed. "We can't leave the house. My brother can't go to work. My sister can't go to school — she's 12 years old. My mother can't go to the grocery store." Woods' younger sister, Jodie, has also been on the receiving end of hateful comments on social media, with trolls flooding her Instagram with attacks on Woods.

But despite calling out the trolls who have been attacking her since the reports first surfaced, Woods made it clear that she simply wanted to share her side of the story and publicly own up to her mistakes. "I'm not here to play the victim," Woods told Pinkett Smith frankly. "I'm here to take responsibility. And when I was asked about what happened that night, I didn't tell the truth to the people I loved, not because of malicious intent, but because I was scared."

While it seems as if the controversy surrounding the reports of Thompson and Woods isn't going away any time soon, it's clear that the model is determined to take responsibility for her actions, and to make sure that people hear her side of the story before rushing to conclusions.