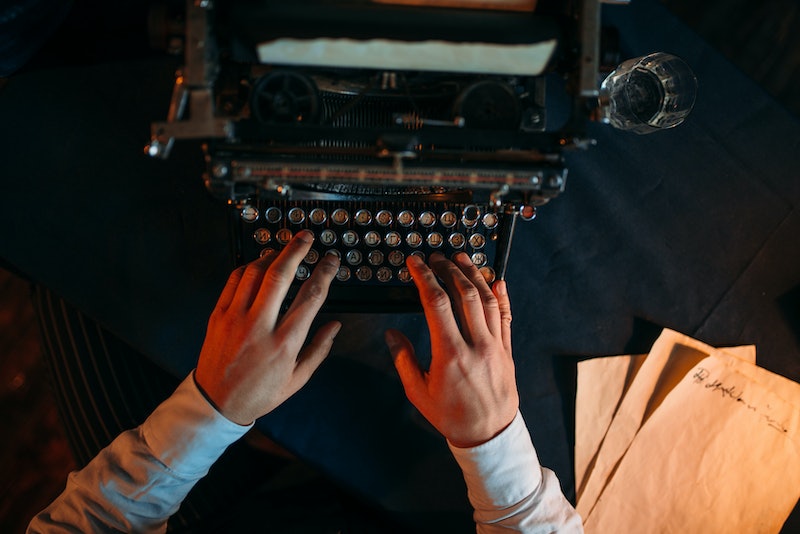 Subscription boxes are a dime a dozen these days, but every so often, one emerges that truly stands out from the pack — and if you like the idea of receiving a beautiful and mysterious package full of secrets ever month, New Orleans-based artist, miniaturist, and storyteller Lauren Delaney’s “Letters From Dead People” subscription is one such subscription that's as unique as it is spooky. For $12.99 per month, Letters From Dead People will send you a flat mailer once a month featuring a letter sent “from beyond the grave,” along with a few other documents — and if you investigate each of these mailings closely enough, you’ll unearth a spooky tale set in New Orleans during the Prohibition era in each one.

Delaney actually makes and sells a wide variety of items and subscriptions, each of which is an entirely unique experience. There are, of course, miniatures; tiny apothecary bottles holding mysterious substances, doll-sized hand-painted paper dresses, and itty-bitty books with hidden secrets are all among the single-purchase wares Delaney offers. If you’re interested in receiving a new miniature every month on a subscription basis, the Miniature Book Of The Month Club will make that happen — subscribers are sent a new tiny book each month, thus building up their miniature libraries one book at a time.

But if you’re interested in a mystery — something that’s not just a series of pretty little items received monthly, but a series of pretty little items that tell a spooky and peculiar story — then you’ll want to take a look at two of Delaney’s other offerings: The Case of the Haunted Dollhouse and (of course) Letters From Dead People. It’s up to you to unravel the stories, however; neither of these experiences simply gives you their tale. You’ll have to put your brain to work as you sift through the documents and ephemera included in each box in order to figure out exactly what’s going on.

Letters From Dead People looks to be a bit more accessible than The Case of the Haunted Dollhouse; as its name might imply, it’s comprised exclusively of documents, with a letter being the center of each month’s shipment. But, oh! What a letter! According to the Letters From Dead People website, each letter is sent “from beyond the grave, transcribed in New Orleans by famed medium, Mina Bird” — and to make things even more interesting, the letters are meant to have been written in the 1920s. The events described in the mailings are fictional, of course; similarly, the letters and accompanying documents are only designed to look like they’re almost a century old. Still, though — it’s a method of immersive and interactive storytelling that’s sure to appeal to those who would absolutely consider, say, spending the night in a haunted prison, or who followed the Dear David story with an almost fanatical fervor.

What exactly might one expect to find in a Letters From Dead People shipment? My Subscription Addiction reviewed six months’ worth of the subscription — and although I’m not certain that new subscribers will necessarily receive the letter seen in these reviews, they give us a taste of what the whole thing is like. You might, for example, find a photograph or a few pages that have been ripped out of a book. You might see a transcription of an interview that’s part of a bigger case file. You might review old newspaper clippings and postcards. And, of course, you’ll always find a letter — often handwritten, although sometimes typed, and frequently, although not always, from the mysterious L. Delaney, whom I presume to be a fictionalized version of Letters From Dead People's own creator. (Indeed, if you check out the About page on the Letters From Dead People website, you’ll find a biography that seems to include elements of fact and fiction — both Lauren Delaney and L. Delaney studied art, although unlike L. Delaney, Lauren Delaney didn’t attend the "School for Wayward Girls and Design Students"; she went to NYU.)

As far as I know, Mina Bird herself is as fictional as the documents that make up Letters From Dead People — but interestingly, there was an alleged medium operating in the United States at around the time Bird is meant to have been doing her thing with quite a similar name: Although she went by Margery, she was officially called Mina Crandon. What’s more, one of her supporters was named J. Malcolm Bird.

This is purely conjecture on my part, but it wouldn’t surprise me if these two historical personages — who, like Mina Bird, had run-ins with famed escape artist and notorious debunker of psychics Harry Houdini — turned out to have served at least in part for the inspiration of Mina Bird’s tale. As Delaney told the New Orleans Advocate in May of 2018, “I’m interested in all the ways stories are told, especially ones that might be overlooked or forgotten about. And even though much of my work is fictional, there’s a lot that takes actual places and events as points of departure.”

Letters From Dead People is ongoing, and you can begin it at any time — but there’s also a bigger story at play, too, should you choose to stick with it: Mina Bird, it seems, is missing, which is a mystery unto itself. Even so, though, each month’s shipment can be enjoyed as a standalone tale. As Delaney told My Subscription Addiction in September of 2017;

“Each mailing is meant to stand on its own as an experience, but is also part of a larger narrative. So those who subscribe for several months will see the development of a story arc. But it is my hope that those who drop in for a month or two will also enjoy their parcels singly!”

And hey, if you really, really want to know what you missed in previous months, you can also purchase the entire first year of Letters From Dead People via Delaney’s Etsy page. It’ll cost you $149.99, which just about averages out to the standard $12.99-per-month cost of the subscription, and includes “the complete 1927-1928 case file comprising the first 12 months of [the] hit mystery subscription series,” according to its Etsy listing.

The Haunted Dollhouse, by the way, also looks like it’s worth checking out; it’s more expensive than Letters From Dead People, but that’s because it consists not just of documents, but also of “a varying assortment of small antique objects, word games, puzzles, and simple construction projects.” The story goes on for five weeks, with anything from 10 to 30 items arriving in each box. The original case file can currently be purchased in its entirety (that is, it’s one shipment containing all five weeks) for $225; the continuation of the story — what I’m kind of thinking of as “season two” of the tale — is set to begin in October of 2018 and can be pre-ordered for $224.10. (These packages will arrive one per week, totaling five shipments in all.)

Now if you’ll excuse me, I have a mystery to unravel...