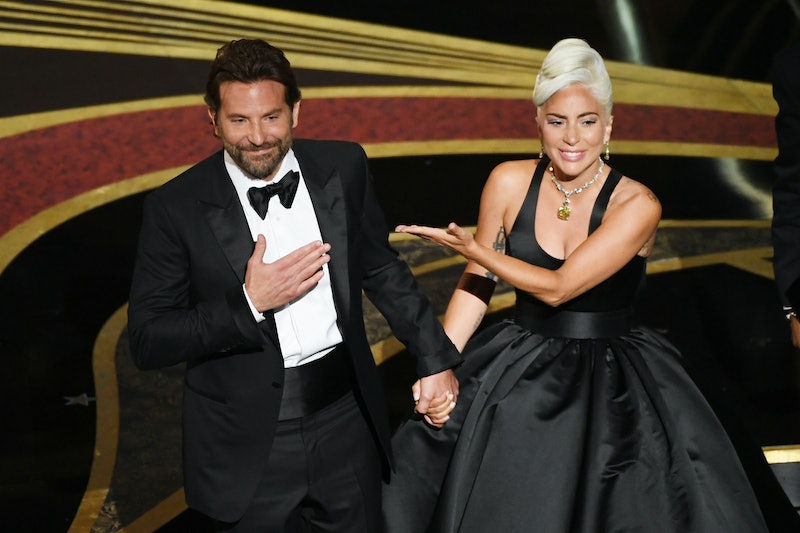 Just because two artists have major chemistry whenever they perform together onscreen or on stage that doesn't mean they are a couple or that they want to be romantically involved. Lady Gaga shut down Bradley Cooper romance rumors on Wednesday while appearing on Jimmy Kimmel Live! The topic of conversation was brought up when Jimmy Kimmel pointed out to Gaga how amazing her 2019 Oscars performance with Cooper really was, especially since almost everyone walked away convinced that they were in love. Well, as the A Star Is Born actor was quick to point out, they were simply doing their job.

A few minutes into their chat, Kimmel said to the Academy Award winner about her intimate performance with Cooper, "It caused this big controversy, because you had such a connection with Bradley that instantly, I guess this is a compliment, people started saying, 'Oh, they must be in love.'"

How did the "Shallow" singer respond? Before Gaga explained their connection, which she shouldn't have had to do in the first place, she allowed her face to do all of the talking for her. She gave the most flawless eye roll that you probably have ever seen. Here it is:

The eye roll says it all, doesn't it? However, Gaga went onto explain how she and Cooper only friends and that they wanted everyone watching to feel love. She said,

Gaga continued that she and Cooper wanted to ensure that "from a performance perspective" that they "were connected the entire time," which there's no doubt they were. If for some reason you haven't seen their duet yet, you can watch it below.

The "Million Reasons" singer artist also pointed out how when she recorded an album with Tony Bennett that brought many opportunities for the two musicians to become close. However, that doesn't mean they had a romance brewing. She told Kimmel,

"I've had my arms wrapped around Tony Bennett for three years, touring the world. When you’re singing love songs, that’s what you want people to feel."

Kimmel responded by joking, "Are you having an affair with Tony Bennett? Be Honest." She jabbed back, "I’m an artist! I guess we did a good job. Fooled you!"

Despite Gaga and Christian Carino recently ending their engagement, that doesn't mean she's running into Cooper's arms or that he had anything to do with their split. The breakup was confirmed to People on Feb. 19 by the singer's rep. (Bustle previously reached out to Gaga's rep for comment, but did not receive an immediate response.)

Also, it's important to remember that the Star Is Born director has been with Irina Shayk since 2015 and they also have a daughter together. Whenever anyone speculates that Gaga and Cooper are in love or professes how much they want them to be a couple, it's disrespectful to all parties involved.

Now that Gaga has officially shutdown the Cooper romance rumors, it's time for everyone to move on and remember that they are talented artists doing exactly what they were supposed to be doing — their job.