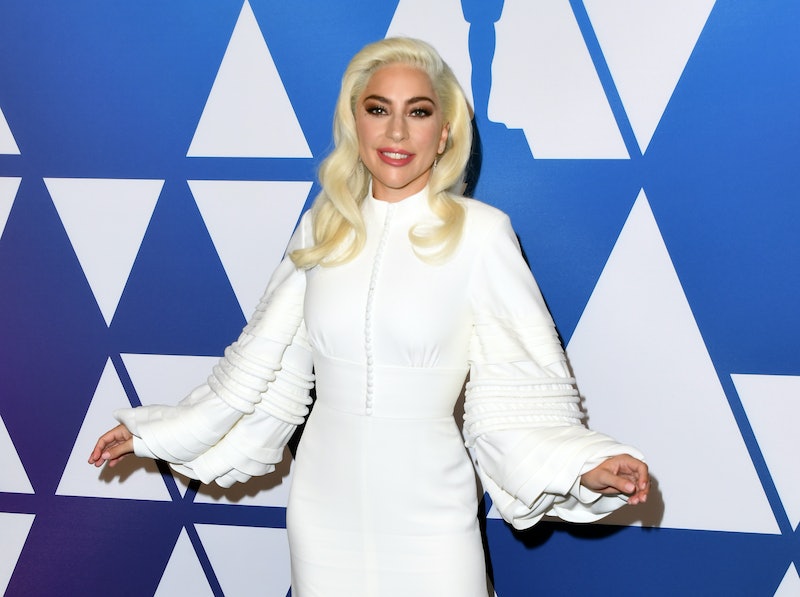 We're far from the shallow now, thanks to Lady Gaga's 2019 Grammys win for Best Song Written For Visual Media on Sunday. It was her first win of the night and it left her in tears. In fact, Lady Gaga's tweet celebrating her Grammys win made it clear that her makeup stylist might have to change their plans.

"I’m not gonna be able to wear any makeup tonight," Gaga tweeted after her win was announced before the show. "We just won our first of Grammy nominations for the night. I’m in tears with honor and gratitude."

Lady Gaga not only thanked the Grammys for the honor, but her co-writers Andrew Wyatt, Anthony Rossomando, and Mark Ronson for helping her make this song possible. Ronson was also excited by the win, tweeting at Gaga's no makeup tweet: "Yes mama."

The singer also thanked her A Star Is Born duet partner, Bradley Cooper. “And Bradley,” Gaga wrote. “I love you so much thank you." This just continues Gaga's Bradley Cooper love fest, as she really just can't say enough good stuff about her co-star. Seriously, we've all seen the "100 people in a room" meme, but it seems that Gaga truly just appreciates Cooper being the one that gave her a chance to take on her Star Is Born role, which earned her first Best Actress Oscar nomination.

The move also earned Gaga an Oscar nomination for "Shallow," which is up for Best Original Song. She'll be competing against “All The Stars” from Black Panther by Kendrick Lamar and SZA, Jennifer Hudson's “I’ll Fight” from RBG, "The Place Where Lost Things Go" from Mary Poppins Returns, and "When A Cowboy Trades His Spurs For Wings” from The Ballad of Buster Scruggs.

Already, the song has won at the Golden Globes, Critics Choice Awards, and the BAFTAS, the latter of which Gaga learned about while getting ready for the Grammys. And yes, it did lead to some serious tears.

"I can’t believe we just won Best Original Music @BAFTA‘s," Gaga tweeted along with a photo of her reaction to the win. "I wish so much I was there but am at the Grammy’s to show them our love as well. We made a film about music. This means the world to me. Thank u to all our fans we love u so much, we wouldn’t be here without u."

It's clearly been a big day for Gaga, who hopefully packed a whole lot of tissues in her Grammys bag. Especially since she's already won a second Grammy for Best Pop Solo Performance for her song "Joanne (Where Do You Think You're Goin'?)".

It led to another excited Twitter reaction from Gaga, who let her Little Monsters know how much this win in particular meant to her using a loudly crying face emoji and a heart. "A Grammy for Joanne is more than me & my family could ever dream of," she wrote, adding a fun tidbit about the making of the track. "I sang that version in one take, & poured my entire life & soul into it."

Now it's a Grammy winner, which means Lady Gaga is now an eight-time winner at the awards show (her first win came back in 2010 for Best Electronic/Dance Album for The Fame). And the night's not even over yet, as "Shallow" could still win three more awards, including Record of the Year and Song of the Year. Honestly, who knows how many happy tears Gaga could possibly cry before Sunday night is through.