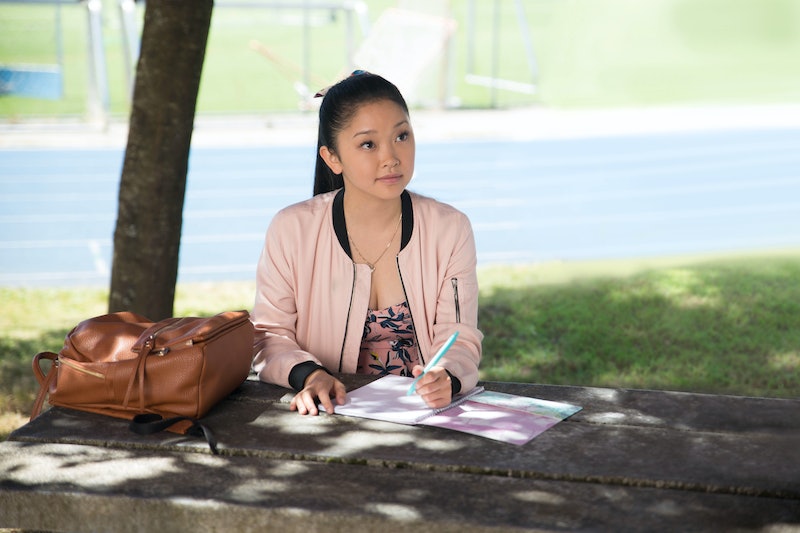 Woah woah woah, Peter Kavinsky and Lara Jean's romance might be in trouble. On Saturday, Jan. 5, Lana Condor discussed the To All the Boys I Loved Before sequel with Elle, and revealed she's afraid of what the fan reaction to a potential storyline will be. In the first movie, Lara Jean works through her feelings for Josh and Peter, and it's a major dilemma for the character. But the internet only had eyes for Peter Kavinsky, aka actor Noah Centineo. Fans might not be thrilled to hear that a new love triangle will be introduced in the upcoming film, giving Peter more competition. The story isn't a complete surprise — the new love interest appears in P.S. I Still Love You, the second book in the series by Jenny Han that the movies are based on. Even so, it's still hard to accept the news that Lara Jean and Peter will face more trouble after the first movie's happy ending.

In December, Netflix confirmed the To All the Boys... sequel, according to Variety. The streaming platform announced the film on Twitter, and promised to bring back Condor and Centineo as stars. News about what's next for Peter and Lara Jean has been scarce since then, but Condor teased the sequel's new romance at the BAFTA tea party in Los Angeles on Saturday. "There's going to be a major new love interest," she told Elle. "The first one was with Josh and Peter, but in the second movie it's going to be a major new character that's going to challenge Peter quite a bit and fight over me, which is not a bad thing."

Condor revealed the new love interest didn't yet have an identity, as finding someone as charming as Peter is a challenge. She said, "I do know that we're working really hard to find someone that's perfect and just as charismatic as Peter, which is hard to do." After all, fans swooned for Centineo, so it makes sense the movie would struggle to find someone captivating enough to steal Lara Jean's attention away from Peter.

In the interview, Condor admitted that the fan reaction to the new story is intimidating. The To All the Boys... fandom is very passionate, and Elle asked the star if she's worried about backlash. "I actually have that fear," she said. "I'm scared." It makes sense to be worried, but fans will likely trust Lara Jean's judgement, no matter how many romantic figures from her past show up to stir drama.

To All the Boys... was a breakout moment for both Condor and Centineo. Since the premiere, Condor joined the cast of the sci-fi thriller Warning, per deadline. She also stars in the SyFy series Deadly Class, which premieres on Jan. 6. Centineo joined the cast of the upcoming Charlie's Angels film, and he'll be the lead in the action love story Valet. Fans might be nervous about that new love triangle, but most of them are likely just glad Condor and Centineo will return for the sequel amid their newly busy schedules.

The love triangle will certainly challenge Lara Jean and Peter, but as Peter tells Lara Jean in movie one, we just have to trust it will be okay.