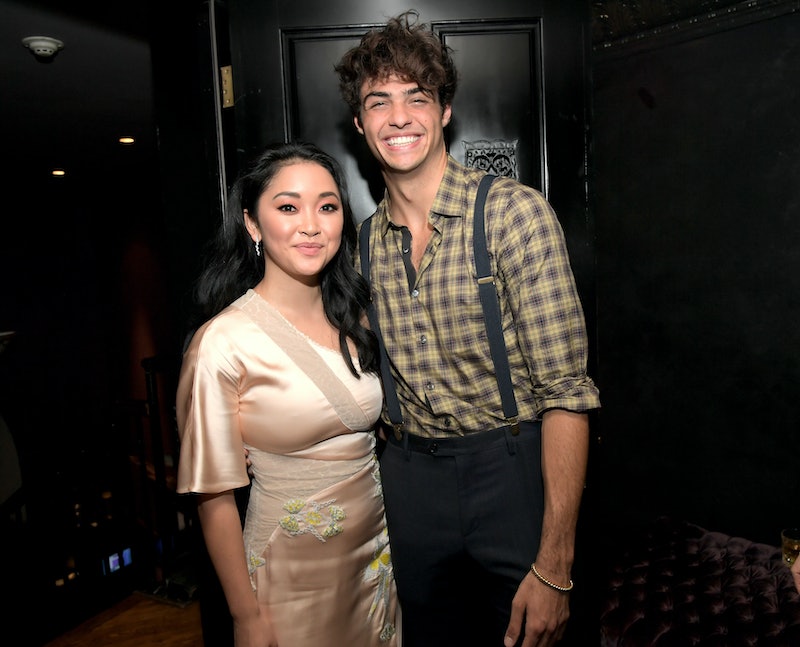 Anyone who has seen (and is, consequentially, obsessed with) To All The Boys I've Loved Before knows that the chemistry between Lana Condor and Noah Centineo is unreal. After all, it would have to be in order to make Lara Jean and Peter's love story jump off the screen in the way that it did. But according to what she said in a new interview with Cosmopolitan, Condor and Centineo weren't upset at speculation that they were dating — in fact, she even admitted that they encouraged it.

As fans of the movie know, back when To All The Boys I've Loved Before made it to Netflix, it was an instant hit, and of course fans started to ship Condor and Centineo in real life, especially after they engaged in some pretty heavy social media flirting. And even though Condor was and is still dating actor Anthony De La Torre, in her new interview, she copped to the fact that she and her costar were fine with the speculation.

“Noah and I definitely encouraged the speculation,” Condor told Cosmo. “But it’s because we believe in the story and the characters and we genuinely love each other. You can truly love someone in a very platonic way.”

Even though they're obviously just friends, it's easy to see the bond that Centineo and Condor have. After being part of a movie that saw such a huge response — and that now has a highly anticipated sequel in the works — it makes sense that they'd get close quickly. And if letting the speculation that they were dating off screen take on a life of its own contributed to the movie's success was the goal, it certainly worked.

But that doesn't mean there weren't also downsides. According to Condor, once people found out that she had actually been in a serious relationship with De La Torre for three years, some of them started leaving unkind comments on his Instagram posts. Condor told the magazine:

“It was so hurtful for both of us. This is supposed to be a good thing. Why are you ­coming for someone who has no part of this story? If you say you support me, why would you hurt someone I love?"

And when it comes to her actual relationship, it sounds like Condor is pretty content. She and De La Torre met at a party in 2015, where she got his number, and it's been love ever since.

"There’s no other person in this world I want to spend every day doing nothing with,” she told Cosmo. Um, is that not the cutest thing ever?

As cool as it would have been if Centineo and Condor actually got together, it's just as cool to hear that they have such a strong friendship — and that Condor is in an awesome romantic relationship of her own. Is it too soon to start the countdown for the To All The Boys sequel? Netflix, whenever you want to drop a release date, we'll all be waiting.