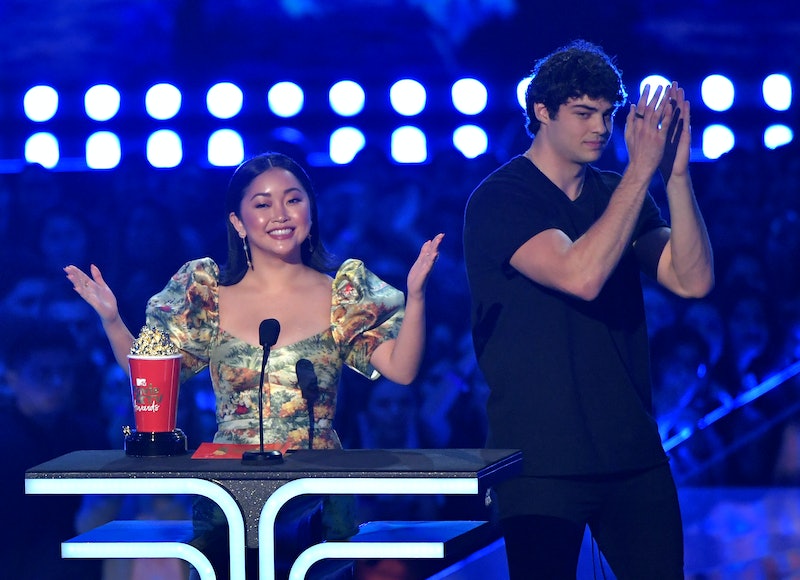 The first sequel to To All The Boys I’ve Loved Before won’t be on Netflix until next February, but thankfully, there is some fantastic To All the Boats I’ve Loved Before content to hold us over. Lana Condor shared a video of the To All The Boys cast sailing together on Instagram on Monday, Aug. 26, and it will surely sail right into your heart. The video was taken earlier this month when some members of the TATBILB ensemble got together for a boat day while they were all filming in Vancouver. It will make you wish you were a) on a boat, b) soaking up summer sunshine, and c) friends with the TATBILB cast.

In the clip, To All The Boys stars Condor, Noah Centineo, Madeleine Arthur, and Trezzo Mahoro, plus actor Diego Velazquez and Condor’s boyfriend Anthony De La Torre hang out on a boat, jump into the water, float around, and laugh their precious faces off. It looks like a perfect summer day, and what do you know? Condor’s Instagram caption suggests just that. “A perfect summer day,” reads the post. “A cast that sails together, stays together.”

Without further ado, here are To All The Boys actors going for a swim and getting along swimmingly.

Don’t you worry, there is more To All The Boats content where that came from.

Frankly, that lunch spread deserves its own video.

If Netflix decided to bless us with a fourth To All Boys movie where all the characters just pal around on a boat for 90 minutes, it would be greatly appreciated.

They Sure Did Pick A Stunning Location For Their Boat Day

That 360-degree view of the boat, the water, the mountains, and the sunshine is nourishes the body like a bottle of Yakult.

It has been a busy year for the TATBILB Cinematic Universe. To All The Boys: P.S. I Still Love You, the first followup to 2018's TATBILB, started shooting in March and wrapped in May. The third chapter in the To All The Boys film series reportedly began filming in Vancouver back in July, a mere two months after they wrapped on the first sequel. Netflix confirmed in August that production on To All The Boys: Always and Forever, Lara Jean had indeed begun. On Aug. 22, Condor tweeted that “a lot of the To All The Boys cast is wrapping” that day and revealed that they would be “shooting the LAST scene of the whole franchise.”

As jam-packed as the summer has been for our beloved TATBILB cast, some of the stars still managed to find some time to hit the high seas and do backflips off the side of a boat. What an ex-sail-lent way to spend a day off.