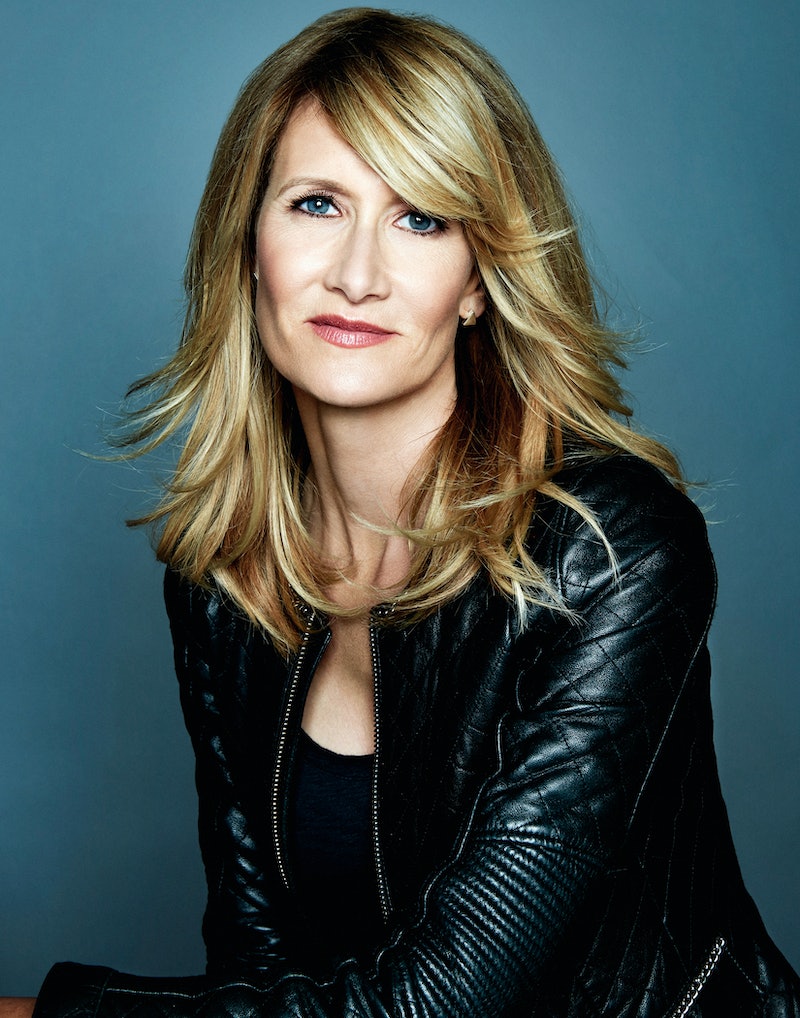 As Inauguration Day drawers closer I am filled with an encroaching sense of doom. Soon, a man who I did not vote for nor support will be President of the United States, and that scares me. In fact, it scares a lot of women I know: my mother, my sisters, my friends, and my colleagues — to name a few. Donald Trump has made incredibly sexist remarks towards women, and that does not inspire me to think he will be a president championing the rights and voices of my sex. It is an uncertain time to be sure, but in the face of such uneasy flux one woman refuses to be frightened. In fact, Hollywood icon Laura Dern is excited for this new phase in America, but not for the reasons you might assume.

"Maya Angelou wrote so beautifully about this," she tells me, curling her feet up under her on a couch at the London Hotel in West Hollywood. "There is an 'I'll Rise' energy right now. And [women] will rise. And we will be the biggest and best of ourselves."

For Dern, who is promoting her latest film, The Founder, co-starring Michael Keaton as McDonalds founder Ray Kroc, Trump becoming America's president simply means women will need to come together more than they ever have.

"A unified stance like I've never felt before is occurring now, which I find really exciting," she says. "We have a different perspective as daughters and mothers, as women in our sexuality and interests, but we have equal voices and we are going to use them."

I can feel the warmth and security in Dern's voice, and to me it's clear the actor possesses a unique optimism that some of us (I for one) can perhaps learn from. Though it's easy to hit back against opposition, Dern is set on taking the high road when it comes to facing the upcoming presidency.

"We don't need to get on Twitter to attack someone who hurt our feelings," she says, referencing the President-elect's controversial Twitter account. "We will not spend our time saying, 'What a meanie. What a bully.' We will spend our time marching, teaching our children, and demanding the closing of the gender gap, the pay gap, equality in how we're treated, protection from injustice and violence, and hopefully protecting colleges around the world for women's safety."

Ironically, or perhaps appropriately, The Founder will be released on Jan 20 — America's Inauguration Day. "[The film] is an incredibly subversive commentary about where we are right now. Specifically, right now," she says.

The Founder paints a portrait of Ray Kroc, the man who successfully franchised McDonald's on a global level thanks to — and these are my words, here — his seemingly ever-growing narcissism and ability to throw everyone around him (like the McDonald brothers who created the company, and his wife, played by Dern) under the bus at every turn. Like Trump, Kroc made his fortune on real estate and land, and also like Trump, Kroc is obsessed with self-branding and identity.

"In a world of social media clearly everyone's mindset is stuck in a sort of Ray Kroc thinking," Dern argues. "Like, 'I've got more than other people. I'm the most important thing.'" But you lose yourself. I've never met a joyful person with that sensibility. Even if they are billionaires, I've never seen a joyful person without compassion."

Because of the obvious parallels between Kroc and Trump, Dern agrees when I suggest that The Founder could be a cautionary tale.

"I think it is and will continue to be the cautionary tale for America: Will you let capitalism win without a sense of compassion?" she asks. "Kroc had to annihilate everyone else so he could be the king. Shakespeare's written about this, Socrates wrote about it too. We've heard about it for a long time, and we continue to have to tell these stories over again."

A mother to two children, Dern says her daughter Jaya was struck by The Founder, particularly one scene in which the McDonalds Brothers were forced to take their name off their own hamburger stand after Kroc trademarked the name for himself. According to Dern, her 12-year-old said to her: "Yeah mom, that's how I felt about [Obama's] Farewell Address, because we just don't know what's next."

Dern is sympathetic towards her daughter's view, but she also believes that as women we have all the tools within us to fight the patriarchy and the unpredictable political landscape to come.

"Hopefully, now, women have awakened to their obligation to their planet, their children, their community, differently than ever before," she says. "Many single working mothers like myself, we've gotta make a living, we've gotta supply for our family and we're doing it on our own. Out of necessity we became feminists — post-war feminists. In terms of morality, it's a really exciting time for women, like the Millions Women's March, which I can't imagine won't be many, many millions of women. We will be marching and we will be heard. We're awake, and no one is going to reverse what we've fought for."

Despite everything, Dern is still an optimist: "I am super excited, yeah, because I don't believe in the stories where the bullies win."

Her staggering grace and empathy is exactly the kind of energy we need in 2017. So let me be the first to suggest it: Laura Dern for President in 2020?