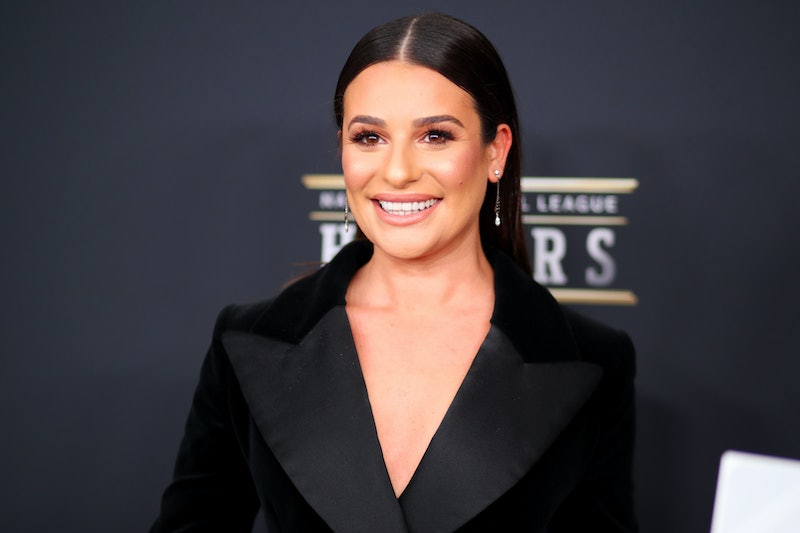 The 2019 holiday season just got a whole lot brighter. Lea Michele's starring in a TV Christmas movie that will air on ABC. At this point, there's no confirmation if Michele will do what she does best in her new role — sing. But, either way, the holiday movie already sounds fantastic. Based on the description, Glee fans will most likely love Michele's upcoming project.

As reported by The Hollywood Reporter on Monday, the made-for-TV movie from Freeform Studios is titled Same Time, Next Christmas and will air this December. Michele is set to play Olivia Henderson, who first met her childhood sweetheart during her family's yearly Christmas trip to Hawaii. Per the official description, "After being separated by distance and years, the two reunite at the same Hawaii resort years later and the old chemistry between them flares up anew — but circumstances conspire to keep them apart."

The project definitely sounds like the perfect holiday rom-com. Michele is beyond excited for her new Christmas role, especially since her debut holiday album will drop around the same time. She said in a statement (via THR): "This holiday season holds special importance to me, as I get to celebrate both my role in this film and my first-ever holiday album. I'm honored to return to ABC with this movie event, and I am excited to share the holidays with everyone."

As you can see above, Michele announced her festive album in a June 20 Instagram. Next to a gorgeous photo of the singer/actor sitting on a stoop covered with snow, all while wearing a stunning red dress, she wrote, "So happy to finally tell you guys what I’ve been working on so hard behind the scenes. The album I’ve always dreamed of making. Coming this Christmas."

After a Twitter user asked Michele on July 8 what made her want to make an album dedicated to the holiday season, she gushed, "Christmas is literally my favorite day and I have the best memories listening to Christmas albums with my mom and dad on Christmas morning so I have always wanted to make one of my own!"

This won't be the first time Michele has sang holiday songs, of course. Throughout her time as Rachel Berry in FOX's Glee, the 32-year-old belted out many Christmas tunes, including "O Holy Night" and "Merry Christmas Darling." There's no doubt Michele's first holiday album will be stellar.

In addition to Michele's latest project, there are so many TV Christmas movies to look forward to, including the 40+ Hallmark Christmas movies coming out in 2019. Furthermore, part of the One Tree Hill cast reunited for a second Lifetime holiday movie. If that isn't enough excitement, Vanessa Hudgens is returning for yet another Netflix Christmas movie called The Knight Before Christmas. The film follows an English knight (Josh Whitehouse) who finds himself in the present day after being sent from the medieval era by a sorceress. While in the present, he falls for a high school science teacher "disillusioned by love." Not only is Hudgens playing the lead role, but she's also serving as an executive producer.

Michele and so many other talents are certainly going to make this holiday season a joyous one.

More like this
Taylor Swift Visited The 'Glee' Set For This Bizarre Season 5 Episode
By Grace Wehniainen
At 28, Rosie Perez Risked Her Career To Stop Playing Stereotypes
By Gabrielle Bondi
Here’s Everything Coming To & Leaving Netflix In February
By Jake Viswanath
Pamela Anderson’s Dating & Marriage History Could Be Its Own TV Series
By Jake Viswanath
Get Even More From Bustle — Sign Up For The Newsletter
From hair trends to relationship advice, our daily newsletter has everything you need to sound like a person who’s on TikTok, even if you aren’t.