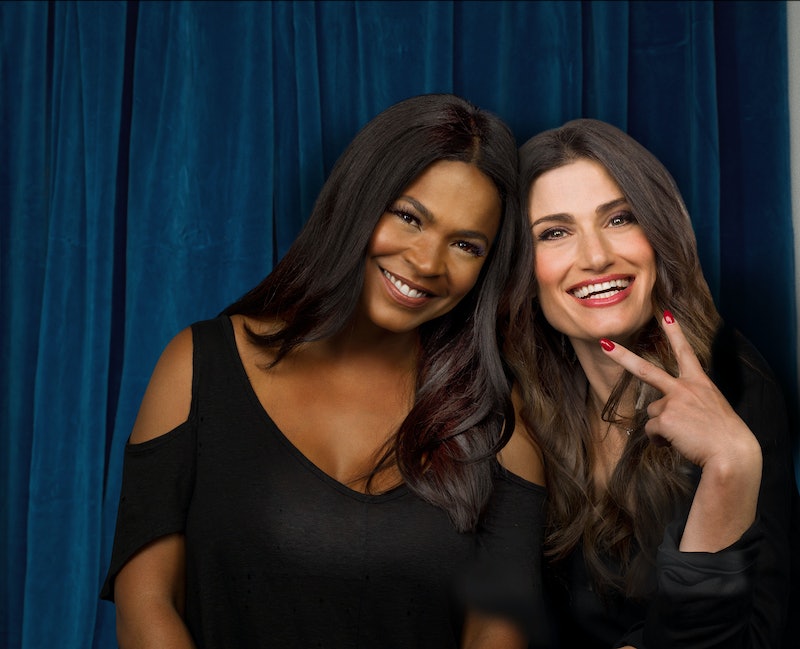 It's always a tricky proposition when someone sets out to remake a beloved movie. Whether its an acclaimed drama like Ben-Hur or a cult favorite action flick like RoboCop, it's exceedingly difficult to catch lightning in a bottle twice. But that's exactly what's being attempted with Lifetime's Beaches remake, so if fans of the original 1988 film are worried, it's completely understandable. How can a made-for-TV movie hope to measure up to the emotional heights of the beloved musical melodrama? Well, with terrific actors, for starters. Lifetime has pulled out all the stops when it comes to the cast of Beaches, and that's an encouraging sign for the film's fans.

Heck, the cast is so good, it should be an encouraging sign even if you're not a fan of the original movie. And if you're not, here's a brief primer on what's about to go down: Beaches is the story of two lifelong friends, Cecilia "CC" Bloom and Hillary Whitney, who meet one day on the Atlantic City boardwalk. CC goes on to become a famous singer and actress, while Hillary grows up into a talented civil rights lawyer. Although their friendship hits some bumps along the road, they're ultimately always there for each other, through life's happy milestones and tragic losses. They are truly the wind beneath each other's wings. (Excuse me while I grab a hanky.)

Here are the wonderful actresses who broke our hearts in the original 1988 version, and the ones who will shepherd us through Lifetime's promising remake:

This icon has been a film actress, Broadway star, and recording artist since the '70s. She made her onscreen debut in 1979's The Rose, and followed that up with roles in the likes of Hocus Pocus, Gypsy, and The First Wives Club, among others. She has won four Golden Globes, three Emmys, three Grammys, and one Tony; she's only an Oscar away from the coveted EGOT. And she's heading back to Broadway this year in the revival of Hello, Dolly!

Hershey had a prolific career throughout the '80s and '90s, appearing in acclaimed dramas like The Last Temptation Of Christ (as Mary Magdalene), Hannah And Her Sisters (as one of the titular siblings), and The Portrait Of A Lady (which earned her an Oscar nomination). Contemporary audiences may be more familiar with Hershey as Natalie Portman's suffocating mother in Black Swan, as Patrick Wilson's concerned mother in the Insidious franchise, and as Regina's evil mother in Once Upon A Time.

One of Long's very first credits was in the seminal 1991 classic Boyz N The Hood. She would go on to appear in many successful '90s hits like Made In America, Soul Food, and The Best Man. Her television roles include a recurring part on The Fresh Prince Of Bel Air and main character on the NBC procedural Third Watch. Her more recent credits include movies like Are We There Yet?, The Best Man Holiday, The Single Moms, Club, and Keanu.

Did you realize that the girl who plays a young Bette Midler in Beaches is none other than Amy from The Big Bang Theory?? Mind blown. After her performance as the precocious performer, a young Mialik would go on to star in her own NBC sitcom, Blossom, which ran for five seasons throughout the early '90s. Bialik would go on to appear on other shows like The John Larroquette Show, Curb Your Enthusiasm, and The Secret Life Of The Americna Teenager before landing her role on the CBS sitcom that would ultimately bring her four Emmy nominations.

Pizzola's resumé may not be quite as long as Bialik's yet, but give her time. At the tender young age of 13, she has already starred in two Broadway musicals: Matilda, in the title role, and Fun Home, as the youngest version of protagonist Alison Bechdel, the real-life feminist cartoonist who is depicted in the show throughout three stages of her life.

Leeds' other credits include a recurring role on the '80s CBS series Beauty And The Beast and an episode of Parenthood — no, not NBC's recent revival, but rather the 1990 version that was produced immediately following the success of the 1989 Ron Howard film.

This young actress has connections to three of her Beaches cast mates: she also appeared in Matilda on Broadway alongside Pizzolo, she sang with the Children's Chorus in the 2015 short film Frozen Fever alongside Menzel… and more on that third connection in a moment. (Capeless has also appeared on Broadway two other times besides Matilda, in A Christmas Story: The Musical and The Lion King.)

CC's overbearing stage mom was played by this Tony- and Emmy- and Golden Globe-nominated actress who you may know from her roles in films like My Big Fat Greek Wedding and You Don't Mess With The Zohan, her roles on TV shows like St. Elsewhere and Desperate Housewives, or her roles in Broadway musicals like My Favorite Year and Funny Girl.

Capeless has experience being a stage mom: she has worked on Broadway as both an actress and a stage manager, and — as you may have guessed from her last name — she is the real-life mother of Grace Capeless, who joins her here as Young Hillary.

The young girl who played Hillary's daughter also had roles in the likes of the '80s CBS drama The Equalizer, the classic sitcom The Cosby Show, and the '90s kids series Ghostwriter. She's still acting to this day, with a recent role in the wonderfully-titled The Halloween Store Zombie Wedding Movie.

Despite her young age, Victoria (whose character now goes by "Tory" in the Lifetime remake) already has a number of credits to her name, including black-ish, Girl Meets World, and the upcoming horror anthology movie XX, which is notable for having been directed entirely by promising female filmmakers.

Let this terrific cast tug your heartstrings when Lifetime's Beaches premieres this Saturday, Jan. 21, at 8:00 p.m. ET — just make sure you have some tissues handy.

More like this
'iCarly' Season 3 Has A Major “Creddie” Cliffhanger To Resolve
By Brad Witter
Everything To Know About The HBO Max & Discovery+ Streaming Service Merger
By Brad Witter
The 'Black Bird' Stars Are Both Heading Back To Apple TV+
By Brad Witter
An Ultimate Guide To The Music Of 'Rap Sh!t'
By Brad Witter
Get Even More From Bustle — Sign Up For The Newsletter