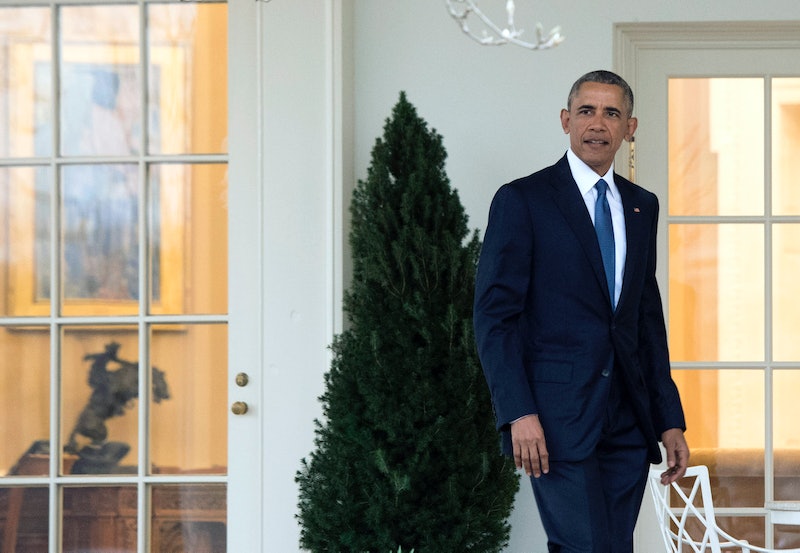 Throughout 2018, Lin-Manuel Miranda has been gifting the world with "Hamildrops" — a new collection of Hamilton content. For the final Hamildrop, President Barack Obama speaks on "One Last Time." The song, performed by Alexander Hamilton and George Washington in the Broadway show, is about Washington declining to run for president again after two terms. So the 44th president of the United States channeled the first American president and read parts of Washington's farewell address. The new Hamilton track makes for a fitting final Hamildrop. But beyond it being the last song of this creative series, listeners will be truly emotional about "One Last Time (44 Remix)" since it will leave you longing for Obama's White House.

Former president and first lady Barack and Michelle Obama have a history of supporting the Broadway sensation that is Hamilton. So it's actually not too surprising that the president lent his voice to this Hamildrop. The gospel-infused version of "One Last Time" features Christopher Jackson, who originated the role of Washington in Hamilton, and gospel and R&B singer BeBe Winans. At around the 1:40 mark, Obama speaks part of Washington's farewell address that was also featured in the original song. And Obama quoting Washington provides modern audiences with a more relevant, and melancholy, take on the wise words.

Many Hamildrops have been moving, like Miranda's mashup with Ben Platt. But it's remarkably special to hear Obama speak the words of America's first president. Especially when Obama says, "Though, in reviewing the incidents of my administration, I am unconscious of intentional error, I am nevertheless too sensible of my defects not to think it probable that I may have committed many errors. I shall also carry with me the hope that my country will view them with indulgence."

As the Mount Vernon website notes, Hamilton is the one who mostly wrote Washington's final address. And Washington's decision to not run for a third term shaped the American presidency and eventually helped to ensure there would be limits on how many years one person could hold the office. That means that even if you wanted Obama to remain president after 2016, he had to gracefully hand over the role to Donald Trump. So "One Last Time (44 Remix)" reminds American citizens of the historical importance of this system.

Perhaps fans should have seen Obama's contribution to Hamildrops coming since the president has continually recognized the importance of Hamilton. Along with Michelle, he hosted a performance of the Broadway show at the White House in March 2016. And a few minutes before "One Last Time (44 Remix)" dropped, Miranda reminded his Twitter followers how he first previewed Hamilton in front of the Obamas in 2009.

During Obama's final days in office, the Hamilton cast returned to the White House and performed "One Last Time." Afterward, Obama said, "What an incredible gift these folks have given to the United States of America. It is rare where a piece of art can remind us about what's best in ourselves and that's what these guys have done and that is a great gift. And with that, I say goodbye."

"One Last Time" holds significance for any former president, but it's particularly poignant regarding the transition from Obama to Trump since the political landscape has become so divided in that time. So the final Hamildrop allows President Barack Obama to add to his legacy in what's sure not to be the last time.