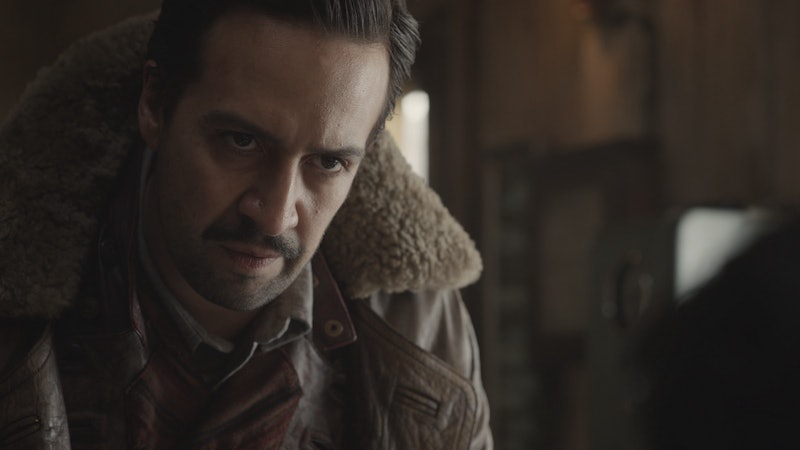 Philip Pullman's His Dark Materials trilogy is an epic universe-spanning fantasy retelling of Paradise Lost, and the character who helps protagonist Lyra Belacqua navigate it all is affable Texan aeronaut and adventurer, Lee Scoresby. Hamilton-creator Lin Manuel Miranda plays Lee in His Dark Materials, and it's an important role both within the show and for Miranda himself.

In an HBO video, Miranda, a longtime His Dark Materials fan, explained that he wanted to play Lee because Lee "knows very firmly who he is."

"What everyone loves about Lee is he's got his own internal principles that he won't bend for anyone. And that makes him a lonely man in a tough world ... He's a bit of a rascal, and good at pickin' a pocket," Miranda says in the video.

If Lee sounds a bit like another popular smuggling space adventurer, Miranda thinks so too. "In a book full of larger-than-life characters, with bears and witches and angels, Lee stands out," Miranda explained to New York Times. "He is the Han Solo of the crew, in it for himself, until he slowly reveals himself as a hero."

Lee is a hot balloon aeronaut who, just like Han Solo, initially won the hot balloon in a poker game. Lee also spends most of his time talking to a nonhuman creature — his daemon, Hester, a wild hare. In the world of His Dark Materials, every human has a daemon, a manifestation of their soul that appears as an animal they can communicate with. Daemons can never stray too far away from their humans, or both parties suffer emotional pain. Hester, voiced by Latina comedian Cristela Alonzo, is Lee's primary companion, and really the only creature Lee feels closest to.

"Lee Scoresby spends a lot of time alone and he talks to Hester a lot and she talks back a lot," Miranda explained to Entertainment Weekly. "A lot of the time with Lee and Hester, Lee is already getting into trouble before Hester can be like, 'Yeah, that’s not a great idea.'"

But then Lee meets Lyra, the Skywalker to his Han Solo, and everything changes. "Once he meets Lyra, he realizes he can be a part of something bigger than himself," Miranda said in the HBO video. "The most important thing is to feel Lee's love for Lyra. The way in which it grows, and how it totally upends his world."

When Lyra meets Lee, she's already on the run from Ruth Wilson's Mrs. Coulter, a socialite hiding a dark secret and even darker connections. It's Lee who introduces Lyra to Iorek Byrnison, an armored polar bear-like creature who features on the cover of the first novel in the series, The Golden Compass/Northern Lights. In Northern Lights, it's Lee, Lyra, and Iorek who work together to figure out what happened to Lyra's kidnapped friend Roger.

"I love those books," Miranda told BBC when discussing his casting in the show. "My wife and I read them together when we were first dating — they were the books we fell in love to. I love living inside that world."

It's also a role that Miranda ultimately feels has allowed him to really grow as an actor. "The biggest challenge was just really staying grounded in a very heightened world. You’re living in a world with armored bears and animal souls and flying hot air balloons," Miranda told Entertainment Weekly. "So much of the performance becomes about staying real when you’re trying to convince an armored bear not to kill someone."

With Miranda being so passionate about the role and the project, it's likely that Lee and Hester will fly right into audience's hearts and win other viewers just as Han Solo himself did.