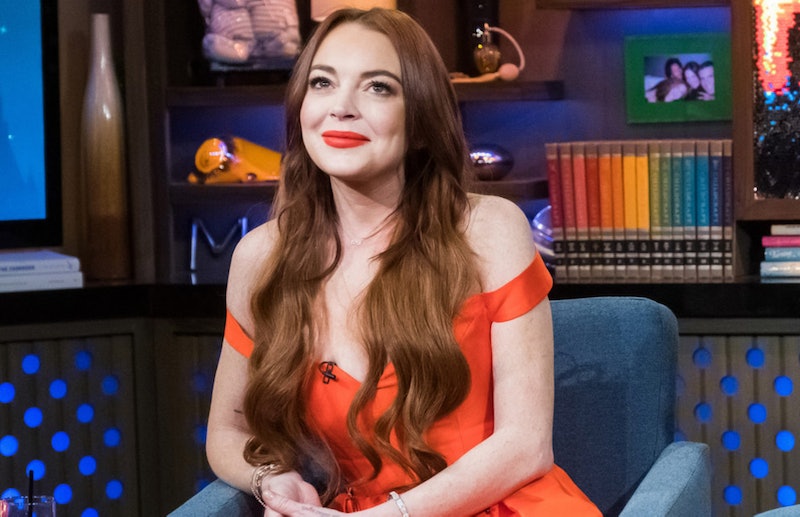 And the Sexy Unique Plot thickens. On Wednesday’s episode of Watch What Happens Live with Andy Cohen, Lindsay Lohan addressed the Jax Taylor rumor we all but forgot about. During the "Plead the Fifth" segment of the chat show, host Andy Cohen played a video message from Lisa Vanderpump in which the matriarch of SUR asked Lilo to “describe Jax as a lover.” The Mean Girls icon cackled at this request, and then told the audience that she has not met Jax. Ever. “Maybe he met, like, Annie or Hallie,” the star of Lindsay Lohan's Beach Club joked. (Always here for a The Parent Trap reference.) And then, Cohen asked if she was calling Jax a liar, to which she laughed, “Yes.”

Lohan's remarks apparently did not sit well with Jax. The day after Lilo denied the tryst on WWHL, the Pumper tweeted,

“Not that I care, it was over 10 years ago and I am happily engaged... but She’s a liar, my two friends who have nothing to gain, were with me the whole night. That’s all I will say on this. So you are lying darlin.”

He also shared a screen grab of text messages that are from one of the friends that was apparently there with him the night in question.

So how did we get here? Why on Earth would LVP possibly record a video message in which she asks Lilo to assess her on-again, off-again employee "as a lover"? Why are Lilo and Jax calling each other liars? Because 2019 is already a weird year, that's why.

Oh, and because of something that came up on Watch What Happens Live over three years ago. On a November 2015 episode of Cohen's late-night show, Pumper Tom Schwartz said Pumper Jax Taylor hooked up with Lilo. “It was a long time ago,” Jax said. He also called her “very affectionate” and “great.”

The following day, Jax denied the hookup to TMZ. "No, no, no," he told the entertainment news site. "We hung out for one night. I don't know where people are getting that." When TMZ pointed out that the rumor was only in the ether because Jax and Schwartz talked about it on WWHL the night before, Jax replied, "Just because we hung out for, like, an hour doesn't mean we hooked up."

The story popped up again when Jax and Lilo both attended DailyMail.com’s holiday party in 2017. After the event, Bravo’s The Daily Dish asked Jax about the Lilo thing, but this time around, he did not try to shut the story down. Instead, the Bravolebrity said,

“Yeah, that was years ago. Years and years ago … I can actually pinpoint it, I think it was when she got married to Samantha Ronson, like, a week later. It was around that time. It was at a nightclub. Just ended up back at her spot. It was what it was.”

Lohan and Samantha Ronson dated back in the late ‘00s, but as far as we know, wedding bells did not ring at any point during their relationship. So uh, I'm not quite sure what he's referring to.

Anyway, thanks to Lilo, I'm now imagining a version of The Parent Trap where Annie and Hallie grow up, move to Los Angeles, get jobs at SUR, and then become the stars of a hit Bravo reality series. That really would be a SUR-real The Parent Trap sequel.