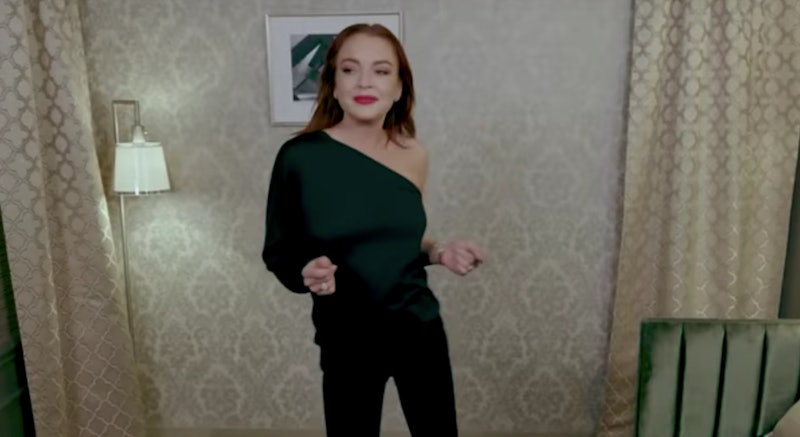 Over the past week or so you've probably seen a lot of blindfolded people all over your Twitter timeline tackling the Bird Box challenge, but on Monday night's episode of The Tonight Show, the Internet sensation got a huge upgrade with Lindsay Lohan's Bird Box parody.. And whether you wanted this one or not, her take on Netflix's newest hit might be the best one so far. Why, you ask? Well, this one brought back the #DoTheLiLo challenge.

The Tonight Show's take on the Bird Box challenge started with Jimmy Fallon asking The Roots and his sidekick Steve Higgins to put on a blindfold and "do every single thing" he says to help parody Bird Box. "If we look at what's out there," Fallon tells his team. "We will not make it." Oh, would Sandra Bullock be proud of his commitment.

Now despite Netflix's warning of the dangers of said challenge, the guys decided to brace themselves for what horrors might await them in the halls of The Tonight Show studio in 30 Rock. Turns out, though, the real trouble was actually hiding where they'd least expect it: Lohan's dressing room.

See, for this challenge Lohan didn't have to put on her blindfold, just her dancing shoes. The real danger was Lohan's now legendary hair flippin', high kickin', shimmyin' dance that took Instagram by storm last year. Here, though, it looked a bit like a moment out of Twin Peaks' Red Room.

When the guys get to her room, which luckily has no windows, they can't help resist her moves and decide to try it for themselves. "It's just like I'm in Mykonos," Higgins said, shouting out Lohan's Beach Club on the Greek island that is the focus of a new MTV reality show.

Questlove wasn't as into the dance as the rest of the guys. "I'm putting my blindfold back on," he says. And, despite participating in the video, Lohan might feel the same way. Later in the night during her interview, she told Fallon that she wasn't necessarily happy about her dance moves going viral.

“I didn’t even know that, until people told me!" she said of the dance, which was shared on Neil Wang's Instagram story while she was filming Lohan Beach Club. "It’s so embarrassing to me now," she continued, "you have to understand that. I’m, like, never dancing again.”

Luckily, she did come of out dancing retirement for the Bird Box challenge parody. And honestly, considering how she feels about it, she's really handled it in stride.

This ability to handle crises will definitely come in handy on Lohan's new reality show, which will focus on her business ventures in Greece. And for Vanderpump Rules fans, this one might be a must-watch since Lohan is giving off some serious Lisa Vanderpump vibes. In the trailer for Lohan Beach House, Lohan even says she's looking to start an "empire." And if that's not a Vanderpump move, I don't know what is.

Whether Lohan will ever dance again after this Bird Box challenge, who's to say, but what is clear is that Lohan's Beach House might be the hot spot to be during these chilly winter months.